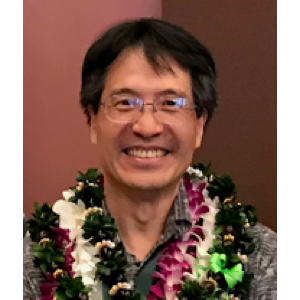 Bo Qiu, professor of oceanography in the University of Hawai‘i (UH) at Mānoa School of Ocean and Earth Science and Technology (SOEST), is the recipient of the 2019 Prize of the Oceanographic Society of Japan. This recognition is awarded annually to a member of the Society who has made outstanding contributions to the progress of oceanography.

Qiu, who has been with the UH Mānoa Department of Oceanography since 1993, has focused his research career on the circulation and its variability in the North Pacific upper ocean, from the surface to a depth of approximately one mile.

Additionally, he has published more than 150 peer-reviewed papers in well-respected scientific journals. Qiu’s publications, which are frequently cited by other researchers, have been influential in setting the path for research directions in his field of study.

When asked what has interested him about his work, Qiu responded, “The most rewarding aspect of my research is through carefully examining observational data, either via direct ship-based measurements or remotely via satellite observations, one is able to detect ocean circulation features that are unknown heretoforth and are of importance on how the world ocean circulation functions.”

“Bo Qiu’s work on the North Pacific circulation has broken new ground. He is a very active collaborator and supporter of close links between UH Oceanography and our colleagues in Japan.  The Prize of the Oceanographic Society of Japan is a highly deserved honor,” said Niklas Schneider, chairperson of the Department of Oceanography.

“Having spent my formative ten years in Kyoto, first being an undergraduate student and then a graduate student, receiving the Japan Oceanographic Society (JOS) Prize is tremendously meaningful to me personally,” said Qiu. “I have been a member of JOS since 1984. My education and growth as a young scientist have benefitted significantly by being associated with the many JOS mentors, colleagues, and close friends. Beyond the personal recognition, this Prize will raise the visibility of the Department of Oceanography, the International Pacific Research Center and SOEST, promoting future exchanges and collaborations between the UH and the JOS colleagues.”

In the more than 50-year history of this prize, Qiu is only the second non-Japanese awardee, and the first non-Japanese physical oceanographer to be so honored.

Qiu will receive the prize along with a 100,000 Japanese yen award, during the 2019 fall meeting of the Oceanographic Society of Japan.