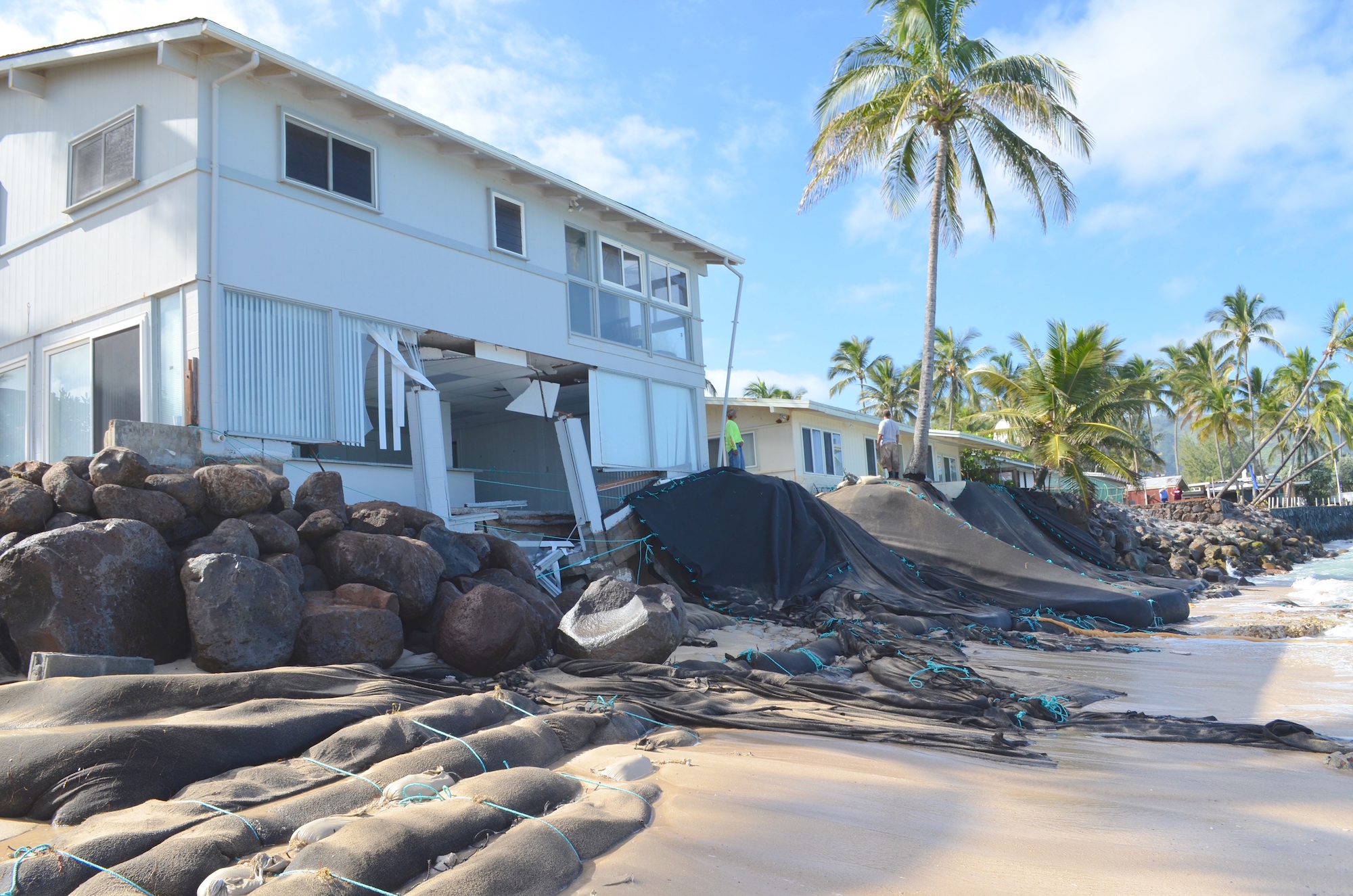 By including models of dynamical physical processes such as erosion and wave run-up, a team of researchers from the University of Hawai‘i at Mānoa (UH Mānoa) and the Hawai‘i Department of Land and Natural Resources (DLNR) determined that land area in Hawai‘i vulnerable to future sea level rise may be double previous estimates. The study was published today in the Nature journal, Scientific Reports.

A widely-used approach for assessing impacts of sea level rise is the “bathtub” model wherein a static sea level surface is projected onto a terrain model.

“The bathtub method provides a good first look at low-lying flood-prone areas but underestimates the full extent of potential damage due to sea level rise, particularly on Hawaii’s high-energy coasts,” said lead researcher Tiffany Anderson, a faculty member in the Department of Earth Sciences at the UH Mānoa School of Ocean and Earth Science and Technology (SOEST).

As sea level rises, several processes are at work—coastal erosion results in permanent land loss but is also essential for preserving beaches; annual wave flooding rapidly escalates past a critical point; groundwater inundation and storm-drain back flow create new wetlands and cause urban flooding. These render coastal armoring insufficient as an adaptation strategy.

“Our more comprehensive assessment reveals important realities that can be overlooked with other methods. Critically, the “bathtub” approach, alone, ignores 35–54 percent of the total land area exposed to one or more of these hazards, depending on location and SLR scenario,” said Chip Fletcher, co-author of the study and associate dean and earth sciences professor at SOEST.

The team also found that typical elevations of Hawaii’s low-lying coastal plains create thresholds of flood levels, above which rapid increases in flooding occur. As sea level rises, coastal lands are exposed to higher flood depths and water velocities. The prevalence of low-lying coastal plains leads to a rapid increase in land exposure to hazards when sea level exceeds a critical elevation of about 1 to 2 feet, depending on location. The team had identified this phenomenon in previous research and named it a “critical point.”

“Additionally, a large portion of lands at risk of flooding are not in direct proximity to the shoreline,” said Anderson. “Instead, they are low-lying areas where sea level rise causes the groundwater table to rise up to the surface. These areas can be located one to two miles inland from the coastline.”

“It’s important that we identify land areas vulnerable to sea level-related hazards because, if left unmanaged, flooding, wave inundation, and erosion will continue to encroach upon coastal lands that are typically heavily developed,” said Fletcher. “Preparing for these effects will be very costly and take a long time to implement. With these results, stakeholders of all types are now able to establish empirically-based adaptation policies.”

The modeling presented in this study was conducted to support the creation of the Hawai‘i Sea Level Rise Vulnerability and Adaptation Report, which is the basis for further government planning initiatives.

“We can always count on these researchers at SOEST to provide the State with cutting edge research and modeling to improve our understanding of coastal hazards,” said Sam Lemmo, study co-author and DLNR administrator. “Their work is immediately translatable to policy and regulatory guidance at the local level. Our goal was to create a scientifically rigorous visual tool to highlight the gravity of sea level rise in our islands to prepare our communities and government bodies for its impact, as well as to provide tools necessary to reduce the shock to our socio-economic system.”

Anderson and team are currently incorporating rainfall into the computer model to determine how sea level-related flooding might be exacerbated during rainfall events that occur during high tides. Hawai‘i Sea Grant, also located at UH SOEST, and Tetra Tech, Inc. are helping guide State and county agencies in considering this new data in future planning.

The statewide passive flooding, wave run-up, and coastal erosion projections are available at the Hawaii Sea Level Rise Viewer (hawaiisealevelriseviewer.org), an online mapping tool and companion to the Hawai‘i Sea Level Rise Vulnerability and Adaptation Report.  The Viewer was developed by the Pacific Islands Ocean Observing System (PacIOOS), another partner at UH SOEST, for Hawai‘i Sea Grant, Hawai‘i State DLNR and Office of Planning, and NOAA.

This work was supported by multiple partners, including the Hawaiʻi Department of Land and Natural Resources, the H.K.L. Castle Foundation, the U.S.G.S. Pacific Islands Climate Adaptation Science Center, the Honolulu Board of Water Supply, the Honolulu Office of Climate Change Sustainability and Resiliency, the Hawai‘i Community Foundation, the County of Kauaʻi, the National Oceanographic and Atmospheric Administration, the School of Ocean and Earth Science and Technology, and the University of Hawai‘i high performance-computing cluster.