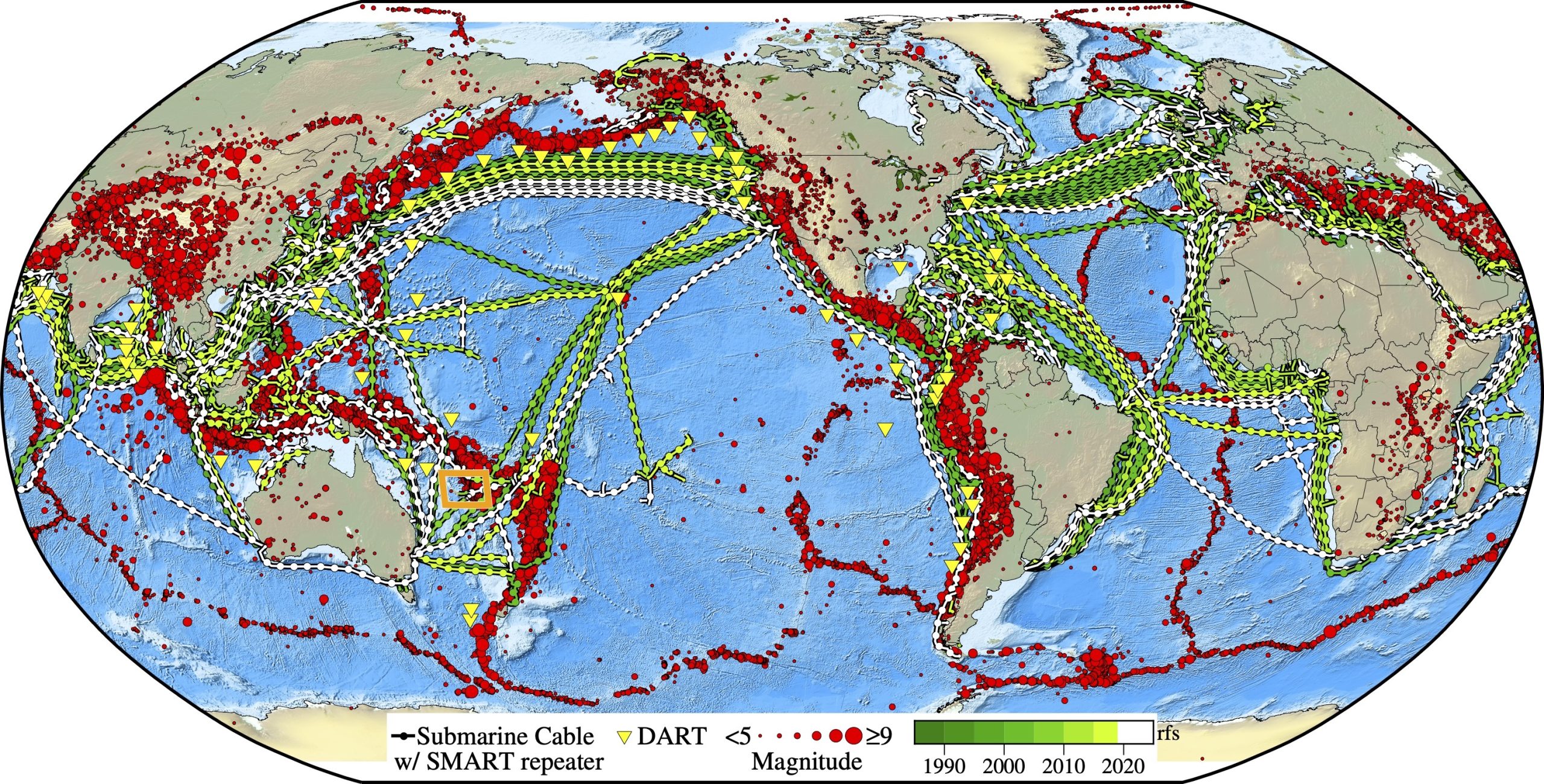 The University of Hawai‘i (UH) at Mānoa is leading an effort to advance a global network of SMART seafloor cables and develop early warning systems for tsunamis and earthquakes around Vanuatu and New Caledonia. The international team recently received support of over $7M from the Gordon and Betty Moore Foundation.

“Through this project, we are developing a new ocean and Earth observing capability—sensors integrated in subsea telecommunications cables—and developing simulations and scientific protocols to provide earthquake and tsunami early warnings,” said Bruce Howe, lead investigator of the new grant and professor of Ocean and Resources Engineering in the UH Mānoa School of Ocean and Earth Science and Technology (SOEST).

“This brilliant project will transform the practical cables that link communications and commerce into a world-wide scientific instrument of profound importance to every person on Earth. We are delighted to help the University of Hawai‘i pioneer this game-changing effort,” said Robert Kirshner, Chief Program Officer for Science at the Gordon and Betty Moore Foundation.

The overarching goal of the newly funded, five-year project is to help bridge the perilous gap between concept and implementation. The team aims to have sensor integration into subsea telecommunications cables become the world standard, leading to a global network for sustained ocean observation, geophysical study of earthquakes, and earthquake and tsunami warning in a world with rising sea levels.

To do this, the team will lay groundwork for the science and early warning use of undersea cables by simulations of the observing system before deployment, data analysis after deployment, and sustained scientific operation.

They will apply results of the simulations to optimize the proposed Vanuatu-New Caledonia cable system and its operation. This will demonstrate the capability of the earthquake and tsunami early warning system based on the SMART sensors in one of the world’s most at-risk country for natural disasters due to its location in the seismically active “Ring of Fire.”

A significant aspect of the project is training staff in the region to increase local expertise in related science, data management to create early warnings and predictions, and telecommunication processes. Included are workshops and courses for Vanuatu Meteorology and Geohazards Department professionals and funding for education of graduate students at the National University of Vanuatu (NUV), UH Mānoa, and partner institutions—providing the science and technical foundation of a lasting observing system.

“It is critical to have a robust work force in preparation for the new SMART cable system,” said Howe. “This will ensure operation and maintenance of the early warning systems which will help mitigate the risks of earthquake and tsunami hazards.”

“Ideally the incorporation of SMART capability would become a routine function for the submarine cable industry,” said Howe. “Achieving this goal will generate key reductions in human and planetary risk. We hope this project is a demonstration for the global audience about how communities and science can benefit from SMART cables.”

About the Moore Foundation

The Gordon and Betty Moore Foundation fosters path-breaking scientific discovery, environmental conservation, patient care improvements and preservation of the special character of the Bay Area. This research is funded by the Gordon and Betty Moore Foundation through Grant GBMF10787 to the University of Hawai‘i. Visit Moore.org or follow @MooreFound for more information.

Watch a news story on Hawaii News Now or read on UH News.