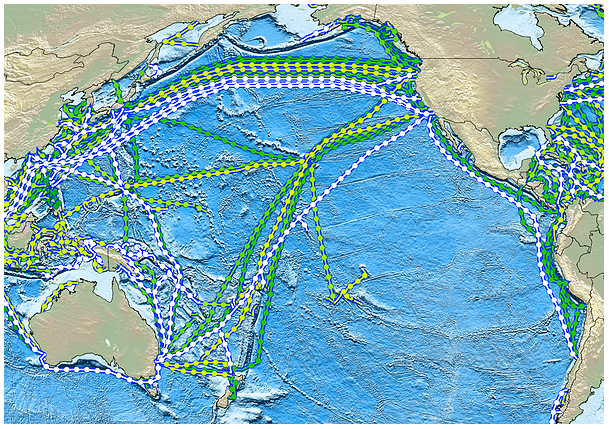 SMART cables will connect scientific sensors to telecommunications cables that criss-cross the oceans.

Two research projects involving University of Hawai‘i (UH) at Mānoa scientists, Bruce Howe and Justin Stopa, have been endorsed as part of the United Nations (UN) Decade of Ocean Science for Sustainable Development (the “Ocean Decade”) program. The projects focus on the deep sea—a dynamic, poorly known realm that is a vast repository for biodiversity, provides critical climate regulation, and houses a wealth of hydrocarbon, mineral, and genetic resources.

The UN proclaimed the Ocean Decade to support efforts to reverse the cycle of decline in ocean health and gather ocean stakeholders worldwide behind a common framework that will ensure ocean science can fully support countries in creating improved conditions for sustainable development of the ocean.

According to UNESCO’s Intergovernmental Oceanographic Commission announcement, the endorsed actions “were selected for their focus on solutions and their ability to accelerate the generation and uptake of ocean knowledge for sustainable development; for their use of innovative technology; their transdisciplinary efforts to co-design solutions between scientists and users of ocean knowledge; and their respect for inclusivity, empowering women, early-career professionals and indigenous knowledge holders.”

Howe, a research professor of Ocean and Resources Engineering at the UH Mānoa School of Ocean and Earth Science and Technology (SOEST), is the chairperson of the Joint Task Force for Science Monitoring and Reliable Telecommunications (SMART) subsea cables, one of the endorsed projects. The Joint Task Force is facilitating the integration of environmental sensors into commercial telecommunications cables that crisscross the globe on the seafloor. The project goal is to connect a worldwide array of sensors that monitor the sparsely observed deep ocean environment, ocean climate, and sea level rise.

“In addition to climate and ocean monitoring, the network will revolutionize real-time warning systems for earthquake and tsunami disaster mitigation,” said Howe.

The SMART subsea cables task force provides coordination between the program and ocean science, operational oceanography, hazard early warning centers, industry, and relevant government agencies. It is presently funded by NASA through the Caltech Jet Propulsion Laboratory. The first major SMART project is underway in Portugal, with others in various stages of planning.

Also endorsed through the UN Ocean Decade is a new National Science Foundation-funded project to implement a Deep Ocean Observing Strategy – iDOOS, with Howe and Stopa contributing as co-investigators; the project is led by the University of Texas at Austin.

“Observing the deep ocean at a level required to inform sustainable development and management faces significant technical and logistical challenges,” said Stopa, Assistant Professor of Ocean and Resources Engineering in SOEST. “To address these challenges, the project will bring together U.S. and international networks engaged in sustained deep-ocean observing, mapping, exploration, modeling, research, and management to leverage each other’s efforts, knowledge, and resources.”

Through engagement with policy makers, regulators, and science coordinators, this project will raise awareness and support for deep-ocean science, and bring science into critical decisions regarding climate, biodiversity and sustainability. One of the project’s goals is to galvanize the broader communities associated with understanding and monitoring the ocean’s health and build an all-inclusive community beyond the typical sciences. Consequently, a key element of project is the mentorship and training of a diverse and inclusive next generation of deep-ocean leaders.

“Endorsement by the Ocean Decade program will help us make connections to all stakeholders, become much more an integral part of the Global Ocean Observing System, and possibly lead to funding avenues for SMART cable projects, for example, with investment and development banks, as part of the Blue Economy,” said Howe. “It is a real opportunity for us to take these efforts to the next level and to impact change in how we approach using the ocean in a sustainable manner.”