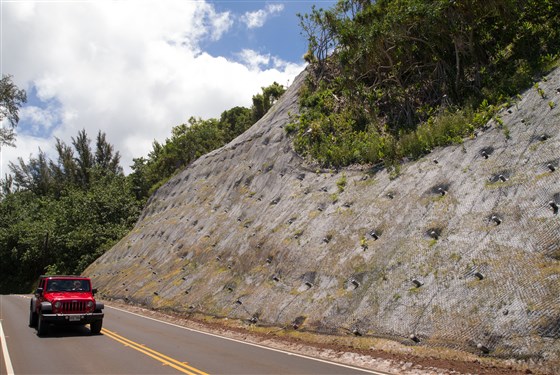 A wire netting covers a hillside to prevent rockslides on Kūhiō Highway near Hanalei, Hawai‘i. Devastating flooding in 2018 damaged roads and bridges on Kauai's North Shore and shut down the main highway into the region for more than a year. Image courtesy of Marco Garcia / for NBC News

To reach the northeastern corner of the island of Kaua‘i requires driving or biking on a winding two-lane highway flanked by the mountains and the sea, where rocky outposts are interlaced with strips of sandy beach protected by fringe reefs.

A two-mile stretch of Kūhiō Highway reopened this week after being closed since April 2018 because of landslides triggered by record-breaking rainfall. Now, parts of the mountainside are held back with wire mesh that climbs 40 feet in a highway repair project estimated to cost at least $85 million. Three narrow bridges built in 1912 were wiped out and only one has been completely repaired; the other two are partially complete, with makeshift wooden guardrails and cones blocking cars from crashing into the Pacific Ocean.

After the floods, the coast suddenly hosted only about 750 residents and some horses, pigs and dogs. And scientists at the University of Hawaiʻi at Mānoa studying the post-flood fish population saw more Hawaiian sea turtles, large red lip parrotfish and schools of bluefin trevally. Researchers Jade Delevaux (a geospatial scientist in the Department of Earth Sciences) and Kosta Stamoulis (currently at Seascape Solutions LLC) will go back next June to see what impact the return of tourists has had on the fish.

“We were definitely struck by the abundance of the juvenile blue trevally, when we went,” Stamoulis said. “In most places in Hawaii, you might see one or two, and usually by themselves, but in Hāʻena during the last round of surveys this last week, we would just see schools of them.”

Read more about it at NBC News.