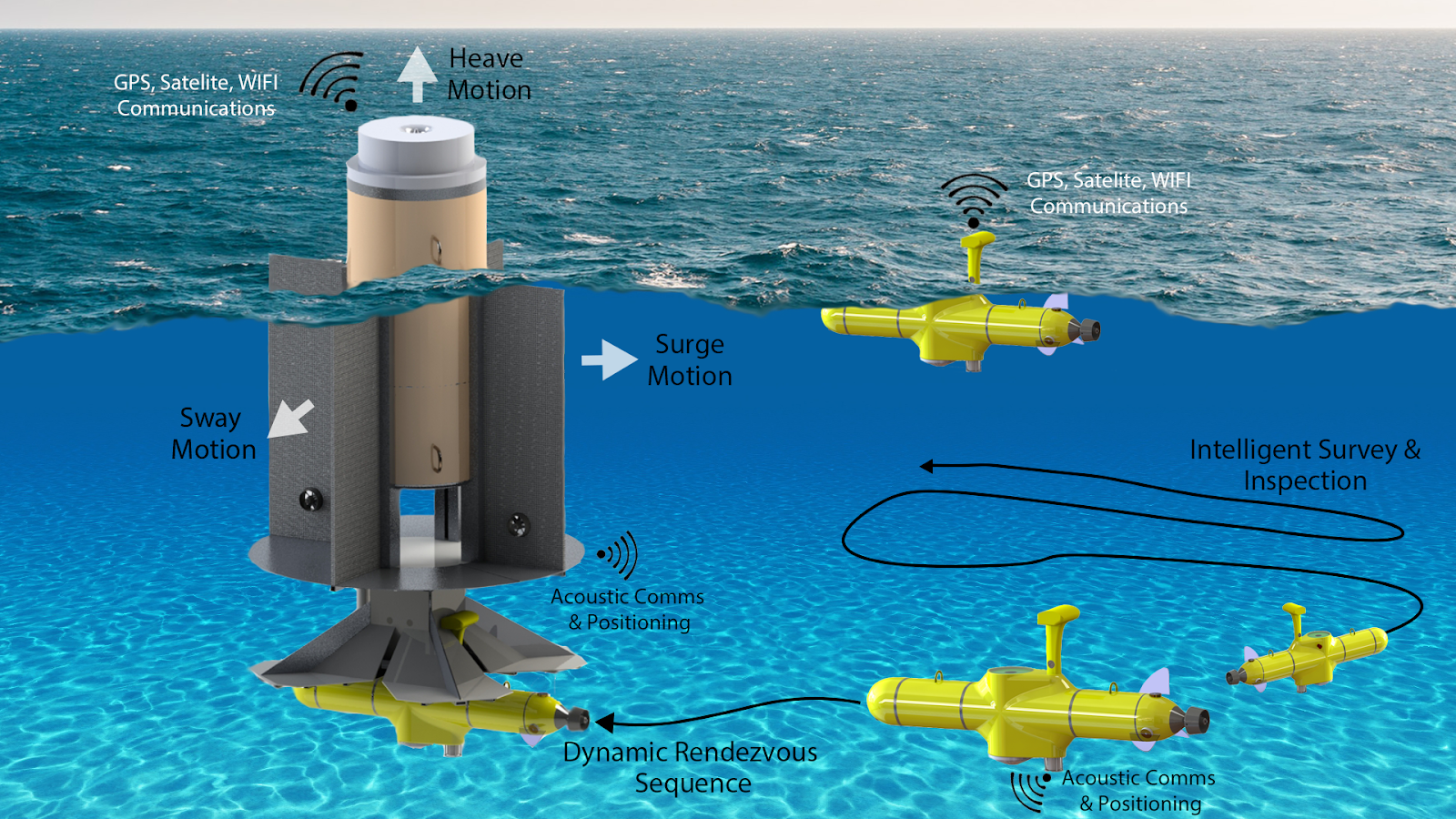 University of Hawaiʻi at Mānoa’s Team Hālona was selected as one of seven winners in the joint U.S. Department of Energy and NOAA Ocean Observing Prize: Design Contest, for an exceptionally innovative wave-powered autonomous underwater vehicle (AUV) charging station capable of providing continuous power to resident AUVs for monitoring and predicting hurricanes.

Team Hālona is led by PhD students Nicholas Ulm of the Department of Ocean and Resources Engineering in the School of Ocean and Earth Science and Technology, and Jonathan Wallen of the College of Engineering (COE). Substantial contributions to the team’s success came from PhD student Allison Chua of Dalhousie University in Halifax, who brings extensive AUV expertise, and COE Masters student Maddyson Jeske with important contributions to the AUV docking design. Faculty advisors for the team are Pat Cross (Program Manager at the Hawai‘i Natural Energy Institute for marine energy, including support to the Navy’s Wave Energy Test Site), Kumar Rajagopalan (WEC hydrodynamics), and Kevin Davies (power management) from HNEI, and Zhuoyuan Song (AUV docking) from COE.

The Ocean Observing Prize began with the DISCOVER Competition, where the UH team won an award in July 2020, along with ten other teams in the competition. Team Hālona’s design integrates a wave energy converter (WEC) with docking and charging capabilities to host an AUV.

The WEC design is based on wave action entering a chamber and forcing air through a turbine to generate electricity. The AUV is equipped with sensing equipment to measure key ocean parameters and upload its data after docking at the base of the WEC. Sensing devices include an acoustic Doppler current profiler, using the frequency of sound waves to measure ocean current velocities, and a conductivity, temperature, and depth sensor, collecting data that is critical to forecasting intensity changes ahead of tropical storm systems.

This win qualifies the team to advance to the next stage of the competition, the Build Contest, to construct a working prototype. In early 2022, the winning teams will go on to test their device in realistic ocean conditions at the U.S. Navy’s Maneuvering and Seakeeping Basin, a world-class test facility in Bethesda, Maryland. In the final stage of the competition, up to three teams will compete in the SPLASH Contest, to refine and test their prototypes at sea, to evaluate endurance and performance.

“Changes in the climate, including a warming ocean, increase the risk of extreme weather, which raises the need for more robust observation systems, especially over the ocean where data is often sparse,” said Ben Friedman, Acting NOAA Administrator. “The new tools proposed by these amazing innovators will help power our ocean observing systems, which enhance hurricane intensity forecasts, safeguard our communities, and support our Nation’s growing blue economy.”

U.S. Navy Naval Facilities Engineering Command is providing complimentary funding to advance the Hālona WEC device, through the Applied Research Laboratory (ARL) at UH and HNEI, along with internal funding from ARL UH.

For more on the Ocean Observing Prize: Design Contest, see the DOE announcement.