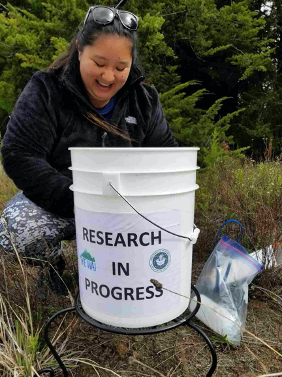 To better understand how and where groundwater is recharged on Hawaiʻi Island, a team of earth and atmospheric scientists from the University of Hawai‘i at Mānoa looked to the source—rainfall. In a recently published study, the team reported a time-series of rainfall data which highlights that extreme events, such as volcanic eruptions and hurricanes, can affect the chemistry of precipitation.

The researchers measured hydrogen and oxygen isotopes and the chemical composition of rainfall from central to leeward Hawaiʻi Island at 20 stations. Rain water isotopes help scientists identify the origin of groundwater and understand the recharge processes in a region.

Hawai‘i Island is characterized by the interactions of Pacific trade wind flow with two 13,000-feet high mountains, as well as one of the largest natural emitters of sulfur dioxide on the planet—Kilauea Volcano.

Fortuitously, the study period included an extreme weather event, Hurricane Lane, a major volcanic eruption at Kīlauea in 2018 and the nearly-complete cessation of long-term volcanic emissions after that historic event.

“These events allowed us the rare opportunity to investigate the impact of volcanic emissions such as sulfate (also known as vog) and a hurricane on precipitation chemistry,” said Diamond Tachera, lead author of the study and graduate researcher in the SOEST Department of Earth Sciences.

Consistent with previous research, the recent study revealed long-term variability in rainfall chemistry due to changes in atmospheric and climate processes in this region. Additionally, the team found significantly more sulfate in the rain samples collected during the Kīlauea eruption and substantially less after the volcanic activity ceased.

“Interestingly, we documented a decrease in the amount of rainfall, which may have been due to increased aerosols from the Kīlauea eruption, as well as isotopic changes in precipitation coinciding with Hurricane Lane,” said Tachera.

The results from this study can be used to better quantify and characterize precipitation—the ultimate source of Hawai‘i’s groundwater.

“In order to better serve communities in Hawaiʻi, specifically in access to fresh water and ensuring better water management, we need to understand where the groundwater is recharging and how it flows in the different aquifer systems,” said Tachera. “This is critical to future water security.”

This research was funded by National Science Foundation EPSCoR ʻIke Wai project, whose goal is to investigate groundwater recharge, storage, and flow within an ocean island volcanic environment.