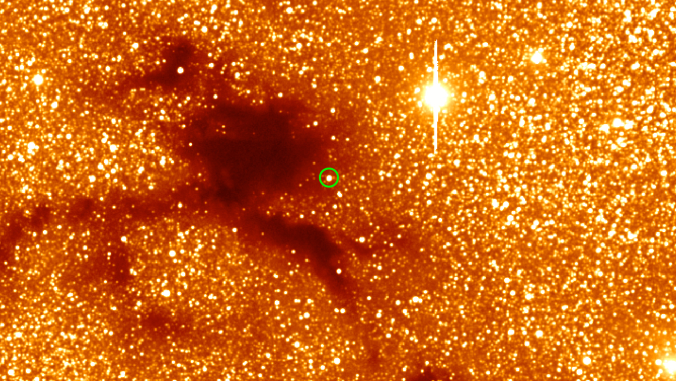 ASAS-SN image of part of the Lupus Molecular Cloud in which many dipper stars, including RY Lup and MY Lup, have been found. This image is the width of 6 full moons.

University of Hawaiʻi scientists are leading one of the newly announced Key Projects on a worldwide network of telescopes called the Las Cumbres Observatory (LCO) global telescope network. Using thousands of hours of observing time, they will investigate the neighborhoods of young stars where planets are thought to be forming.

The UH-led project will monitor stars that dim in a dramatic and usually unpredictable manner due to dust in clouds and disks around those stars. This dust occasionally transits the star, blocking some of its light. These stars are sometimes called “dipper” stars after the dips in a plot of their brightness through time. Although a few such stars have been studied for decades from observatories on the ground, telescopes in space have recently discovered many more of these stars and revealed a greater diversity in their dimming behavior.

“Telescopes in space can stare continuously at stars for weeks or months at a time,” explained UH Mānoa School of Earth and Ocean Sciences and Technology Professor Eric Gaidos. “Earth’s rotation usually makes this impossible to do from a single telescope on the ground. But LCO can seamlessly hand off observations from one telescope to another: from Australia to South Africa to the Canary Islands to Chile to Texas to Hawaiʻi, a star never sets on LCO’s Global Telescope.”

The goal of the project is to better understand how disks of dust and small bodies called “planetesimals” around newborn stars eventually coalesce into planets. Thousands of planets have been discovered around stars similar to the Sun, many of these by NASA’s Kepler mission. Most planets detected by Kepler orbit much closer to their stars than Earth does to the Sun.

To investigate where and how these planets formed, and the local environment of their formation, it is necessary to study the same regions around young stars. However, these stars are so far away that even powerful telescopes such as the Keck 10-meter telescopes on Maunakea or the Atacama Large Millimeter Array in Chile cannot see such detail. The pace and amount of dimming of the starlight gives clues to the distribution of planet-forming dust and planetesimals close to a star.

The instruments on LCO telescopes offer the ability to monitor stars at different wavelengths (colors), something that could not be done with Kepler. Dust scatters blue light more than red light, so dipper stars will appear redder as they dim.

“By observing these stars at different wavelengths we learn about the size of the dust. This tells us where the dust might have formed; in the interstellar medium, in a planet-forming disk, or in a comet-like planetesimal,” Gaidos said.

Some LCO telescopes are equipped with spectrographs which can reveal the presence of any gaseous elements and can distinguish dust that originated in icy regions far away from the star and formed close in where there is no ice. This will allow different explanations for the “dips” to be tested. From icy “exocomets” to “winds” of hot dusty gas emanating from the disk.

LCO telescopes can be easily programmed to observe a certain star for specific dates. “However, the most dramatic and interesting dimming events are rare and unpredictable, so part of the project relies on other telescopes that monitor the entire sky to trigger longer-term follow-up observations by LCO telescopes for interesting targets. For these targets, we will rely on surveys such as the European Space Agency’s Gaia mission and the All-Sky Automated Survey for SuperNovae (ASAS-SN) at Ohio State University and also hosted by LCO,” said Shappee, a founding member of ASAS-SN.

The UH team is looking forward to an annual harvest of data from LCO and supporting observations with Maunakea telescopes such as the upgraded UH 88-inch.

“The variable sky is one of the great frontiers of 21st century astronomy,” Gaidos said. “We hope to learn a lot about how planets form around young stars and what they are made of. But perhaps the most exciting discoveries with our LCO Key Project will be those that we didn’t expect.”