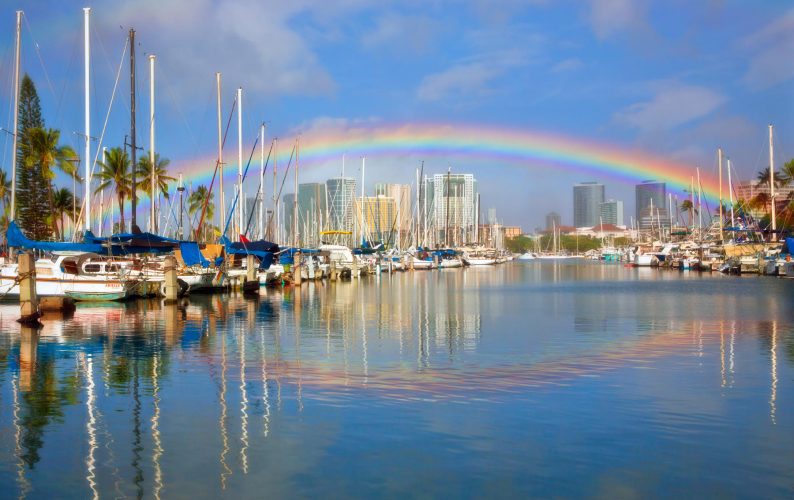 Rainbow over Honolulu Harbor with what appears to be its reflection. However, the reflected bow is not what it appears to be. See the paper for explanation. Photo credit: Minghui Chen.

Rainbows are some of the most spectacular optical phenomena in the natural world and Hawaiʻi has an abundance of them. In a new publication, an atmospheric scientist at the University of Hawaiʻi at Mānoa makes a sound case for Hawaiʻi being the best place on Earth to experience the wonder of rainbows. He begins by highlighting the Hawaiian cultural significance of rainbows, then reviews the science of rainbows and the special combination of circumstances that makes Hawai‘i a haven for rainbows.

“The cultural importance of rainbows is reflected in the Hawaiian language, which has many words and phrases to describe the variety of manifestations in Hawaiʻi,” said author Steven Businger, professor in the UH Mānoa School of Ocean and Earth Science and Technology. “There are words for Earth-clinging rainbows (uakoko), standing rainbow shafts (kāhili), barely visible rainbows (punakea), and moonbows (ānuenue kau pō), among others. In Hawaiian mythology the rainbow is a symbol of transformation and a pathway between Earth and Heaven, as it is in many cultures around the world.”

Why is Hawaiʻi the rainbow capital of the world?

The essential ingredients for rainbows are, of course, rain and sunlight. To see a rainbow on flat ground, the Sun must be within about 40 degrees of the horizon. As the Sun rises to higher angles in the sky, the height of the morning rainbows diminishes until no rainbow is visible above the horizon. The pattern is reversed as the Sun lowers in the afternoon, with rainbows rising in the East and the tallest rainbows just prior to sunset.

Hawaiʻi’s location in the subtropical Pacific means the overall weather pattern is dominated by trade winds, with frequent rain showers and clear skies between the showers. Businger outlines four additional factors that guarantee the prevalence of rainbows throughout the islands;

“At night a warm sea surface heats the atmosphere from below, while radiation to space cools cloud tops, resulting in deeper rain showers in the morning that produce rainbows in time for breakfast,” said Businger.

A third factor conducive to rainbow sightings is daytime heating, which drives island-scale circulations. During periods of lighter winds, showers form over the ridge crests and mountain slopes in the afternoon, resulting in prolific rainbows as the Sun sets.

And lastly, due to the remoteness of the Hawaiian Islands, the air is exceptionally clean and free of pollution, continental dust and pollen.  The clean air ensures the appearance bright rainbows with a full spectrum of colors.

As Businger pursued his passion for photographing these beautiful light displays, he began to imagine a smartphone app with access to weather radar and satellite data that could alert users to nearby rainbows.

“After a few false starts, Paul Cynn and I finally connected with Ikayzo, a Hawaiian smartphone app developer. I am very excited to say that RainbowChase, is now available for free to the public,” said Businger.

RainbowChase is the only app that provides guidance to bring more rainbows into your life.  Users can view radar and satellite images of rain and clouds, along with current and future weather.