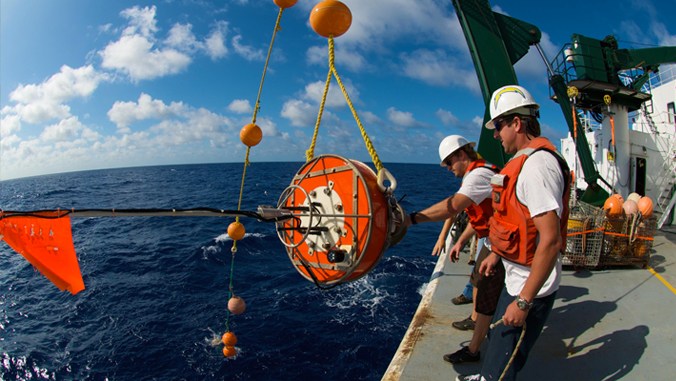 Oceanographers retrieve a sediment trap, above, pulled from the sea at Station ALOHA. The trap captures sinking particles in the ocean. Image courtesy of Paul Lethaby.

Thirty years ago, on 30 October 1988, a team of scientists from the University of Hawaii established Station ALOHA (22°45′N, 158°W) as an open ocean observatory for physical, biogeochemical, and ecological investigations. ALOHA is an acronym for A Long‐term Oligotrophic Habitat Assessment, the stated mission of the National Science Foundation‐supported Hawaii Ocean Time‐series (HOT) program. On approximately monthly intervals since then, scientists, engineers, students, and technicians from around the world have embarked on more than 300 expeditions to observe and record both natural and human‐induced variations in ecosystem structure and function at this remote open ocean location.

“This virtual issue presents some of the key scientific discoveries made at Station ALOHA and published in Limnology and Oceanography over the past three decades,” stated David Karl and Matthew Church, HOT directors, in the opening editorial of the special volume. “Included are papers highlighting spatial and temporal variability in the North Pacific Subtropical Gyre (NPSG) ecosystem from surface waters to the deep sea, the development of novel methods and instrumentation for investigations of biogeochemistry and ecology, and selected data synthesis and modeling efforts. As detailed below, these contributions, along with many others that have appeared in a broad range of scientific journals, challenge existing paradigms and continue to transform our understanding of coupled physical–chemical–biological interactions and the impacts of climate change on marine ecosystems. In recognition of these “historic and visionary accomplishments,” the American Society for Microbiology recently designated Station ALOHA as a Milestones in Microbiology Site, one of only 15 institutions, scientists, or locations where significant contributions toward advancing the science of microbiology have been achieved.”

“With each additional expedition to Station ALOHA, the time series becomes more valuable for the detection and interpretation of ecosystem variability,” stated Karl and Church. “The observations and experimentation conducted at Station ALOHA, including C‐MORE and SCOPE, have contributed to the growing base of knowledge in ways that could not have been predicted when the program began in 1988.”

Read more in the special issue of Limnology and Oceanography and on UH News.