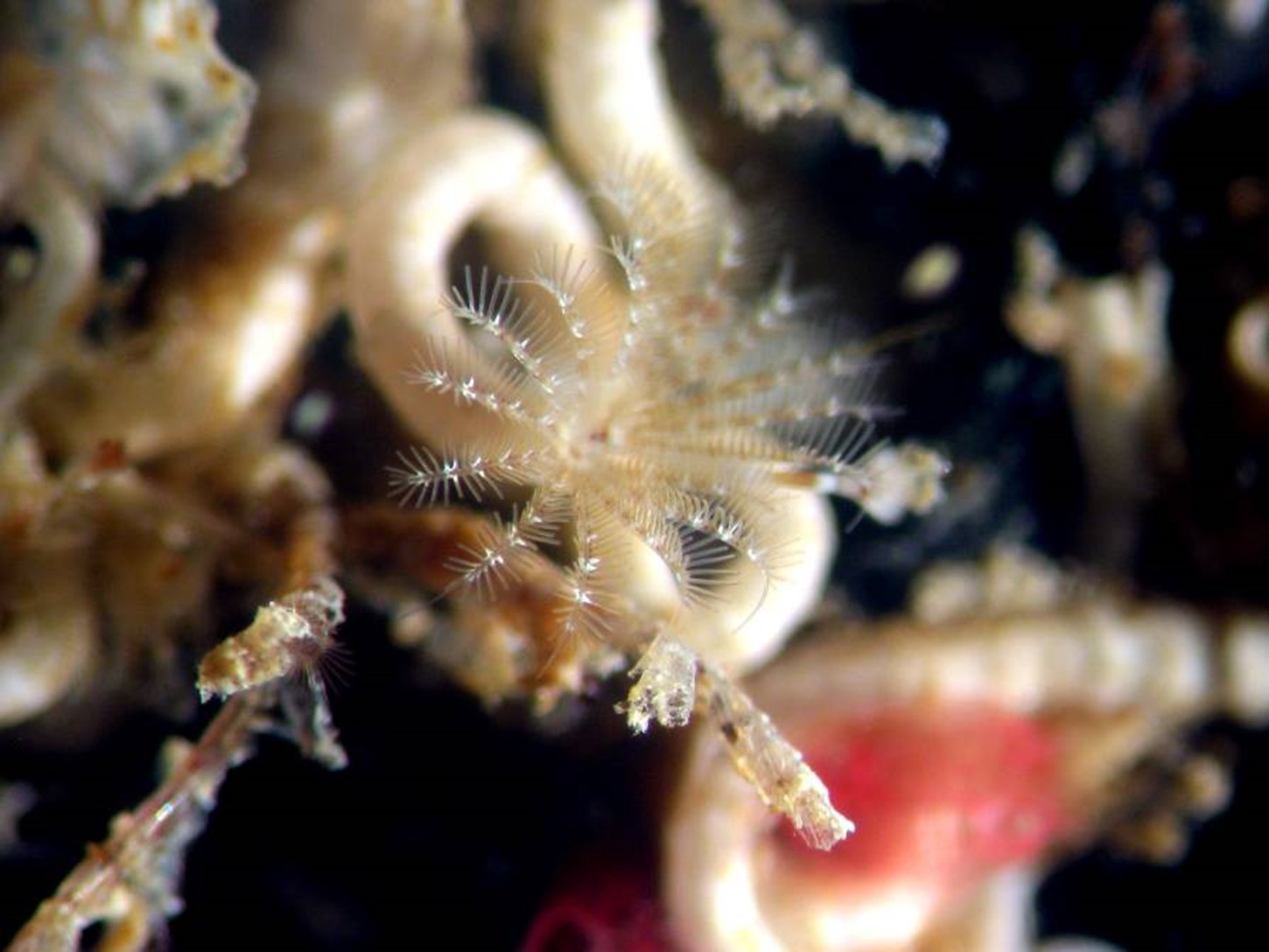 An adult tubeworm, in its tube, with its plume of tentacles extended. Credit: Freckelton et al. 2022

Most bottom-dwelling marine invertebrate animals, such as sponges, corals, worms and oysters, produce tiny larvae that swim in the ocean prior to attaching to the seafloor and transforming into juveniles. A new study published in the Proceedings of the National Academy of Sciences (PNAS) and led by University of Hawai‘i (UH) at Mānoa researchers revealed that a large, complex molecule, called lipopolysaccharide, produced by bacteria is responsible for inducing larval marine tubeworms, Hydroides elegans, to settle to the seafloor and begin the complex processes of metamorphosis.

“This is a major milestone in understanding the factors that determine where larvae of bottom-living invertebrates settle and metamorphose,” said Michael Hadfield, senior author on the paper and emeritus professor in the UH Mānoa School of Ocean and Earth Science and Technology. “It is the key to understanding how benthic communities are established and maintained on all surfaces under salt water, that is, on 71% of Earth’s surface.”

Most invertebrate larvae are capable of staying in the larval stage for extended periods of time until they find a right spot. In the study, led by Marnie Freckelton, a postdoctoral researcher at the Kewalo Marine Lab, a unit of the Pacific Biosciences Research Center (PBRC) in SOEST, the research team asked the question: how do ‘right spots’ cue larvae to settle and metamorphose?

Metamorphosis is a profound change in the animal’s form—from a small swimming larva to an animal with a very different anatomy anchored to the seafloor. Although researchers have known that biofilms, thin layers comprised of bacteria, diatoms and small algae that blanket submerged surfaces, induce metamorphosis of a wide range of marine invertebrate larvae, the mechanism of induction remained poorly understood.

In laboratory experiments with larval tubeworms, the team found that they would not settle on clean surfaces. They required a cue from a surface biofilm.

“The team isolated a single bacterial species, Cellulophaga lytica, that could, when formed into surface biofilm, induce the worm larvae to settle, and then we asked: what is it about that particular bacterium that causes the larvae to settle and metamorphose?” said Freckelton.

With a series of enzyme experiments, the researchers eliminated protein-based bacterial compounds as potential settlement inducers. From there, they investigated, one-by-one, various lipid-containing compounds and identified the trigger—lipopolysaccharide, which forms the outer coat of most marine bacteria.

“In fact, we have different strains of the same bacterial species obtained from Kaneʻohe Bay and Pearl Harbor, and the Hydroides larvae settle only in response to the one from Pearl Harbor,” said Hadfield, who has been a researcher at the Kewalo Marine Lab in PBRC since 1968. “Furthermore, we found in our lab that larvae of the coral Pocillopora damicornis, which is abundant in Kaneʻohe Bay, will settle only in response to the Kaneʻohe Bay strain of the bacterium. This is a breakthrough, because it tells us about the specificity of certain bacteria that guide and maintain a community of animals where they occur.”

The recent discovery can aid in a number of immediate problems, such as coral-reef restoration; mariculture of clams, oysters, mussels and possibly shrimp and crabs; and biofouling, the accumulation of animals and algae on ship hulls that cost the world’s navies and shipping industry billions of dollars per year.

“Hopefully, we can help these efforts by discovering the bacterial molecules—likely lipopolysaccharide—that guide the settlement of lab-reared coral in vulnerable reef areas or oyster larvae in places like Pearl Harbor to employ their filtering capacities to clear the waters, as has been done already in Chesapeake Bay,” said Hadfield. “Further, our research may contribute directly to the development of ship hull coatings that resist biofouling.”