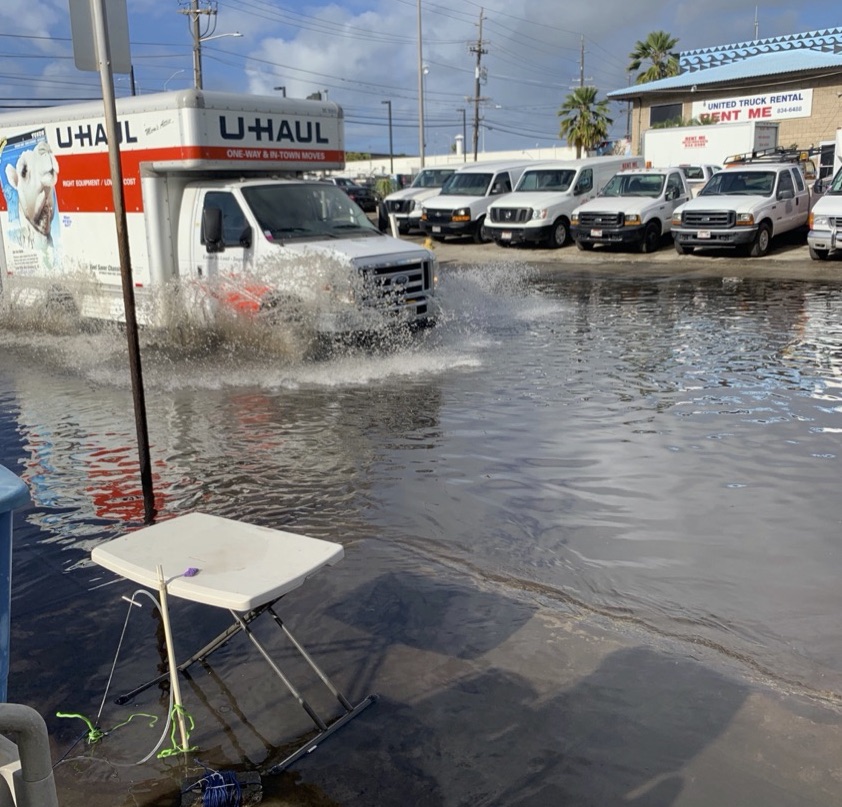 When people think of sea level rise, they usually think of coastal erosion. However, recent computer modeling studies indicate that coastal wastewater infrastructure, which includes sewer lines and cesspools, is likely to flood with groundwater as sea-level rises.

To understand the connection between wastewater infrastructure, groundwater and the coastal ocean, the researchers used chemical tracers to detect groundwater discharge and wastewater present at each site. Radon is a naturally occurring gas that reliably indicates the presence of groundwater, while wastewater can be detected by measuring specific organic contaminants from human sources, such as caffeine and certain antibiotics.

“Our results confirm that indeed, both groundwater inundation and wastewater discharge to the coast and storm drains are occurring today and that it is tidally-influenced,” said McKenzie. “While the results were predicted, I was surprised how prevalent the evidence for these processes and the scale of it.”

In low-lying inland areas, storm drains can overflow every spring tide. This study demonstrated that at the same time wastewater from compromised infrastructure also discharges into storm drains. During high tides, storm drains are becoming channels for untreated wastewater to flood streets and sidewalks. In addition to impeding traffic, including access by emergency vehicles, this flooding of contaminated water also poses a risk to human health.

The team also found evidence that many of the human-derived contaminants were in concentrations that pose a high risk to aquatic organisms. This has negative consequences to coastal organisms where the groundwater and storm drains discharge.

“Many people may think of sea-level rise as a future problem, but in fact, we are already seeing the effects today,” said McKenzie. “Further, these threats to human health, ocean ecosystems and the wastewater infrastructure are expected to occur with even greater frequency and magnitude in the future.”

This project demonstrates that actions to mitigate the impact from sea-level rise to coastal wastewater infrastructure in Honolulu are no longer proactive but are instead critical to addressing current issues. Through its multi-partner effort, the Hawai‘i State Climate Commission also raises awareness around the variety of impacts of sea level rise, including those highlighted by this study.

“Coastal municipalities should pursue mitigation strategies that account for increased connectivity between wastewater infrastructure and recreational and drinking water resources,” said McKenzie. “We need to consider infrastructure that minimizes flooding opportunities and contact with contaminated water; and decreases the number of contaminant sources, such as installation of one-way valves for storm drains, decommissioning cesspools, monitoring defective sewer lines, and construction of raised walkways and streets.”

This study led to McKenzie being awarded the L&O Letters Early Career Publication Honor, given in recognition of the high quality of research conducted by excellent early career scientists.