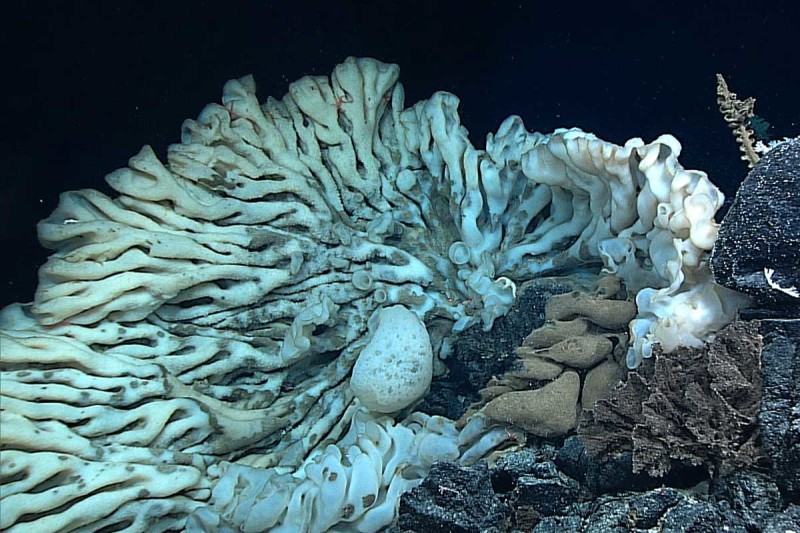 The massive sponge — the size of a minivan, the largest on record — was found in summer 2015 at a depth of 2117 m in the Papahānaumokuākea Marine National Monument. Image courtesy NOAA.

Researchers in the summer of 2015 were surveying an ocean ridge in a marine conservation area off the shores of the Northwestern Hawaiian Islands and amid ordinary ocean floor fare — a bit of coral, some volcanic rock — they came across something surprising: they discovered what they say is the world’s largest known sponge.

Roughly the size of a minivan, the animal was discovered about 7,000 feet down in the Papahānaumokuākea Marine National Monument. The rare sponge, with a bluish-white color and brain-like appearance, stunned scientists when it appeared in the remote cameras attached to their underwater rover. A study published this week in the scientific journal Marine Biodiversity described the massive creature.

Christopher Kelley, program biologist at the Hawai‘i Undersea Research Lab (HURL) and associate professor of Oceanography, who helped lead the expedition, said the crew captured images of the sponge with remote underwater cameras that were positioned above their underwater research vehicle. They then used laser points to measure parts of the sponge and also carefully measured the vehicle and compared those dimensions to the images they had of the sponge and vehicle together to determine its size.

Sponges are similar to coral reefs in that they provide critical habitat for other sea life and filter large amounts of sea water and remove material other animals in the ocean don’t eat. According to scientists, some of the large sponges found in more shallow waters have been estimated to be over 2,300 years old, leading researchers to wonder how old some of these deep-sea organisms that have never been encountered can become.