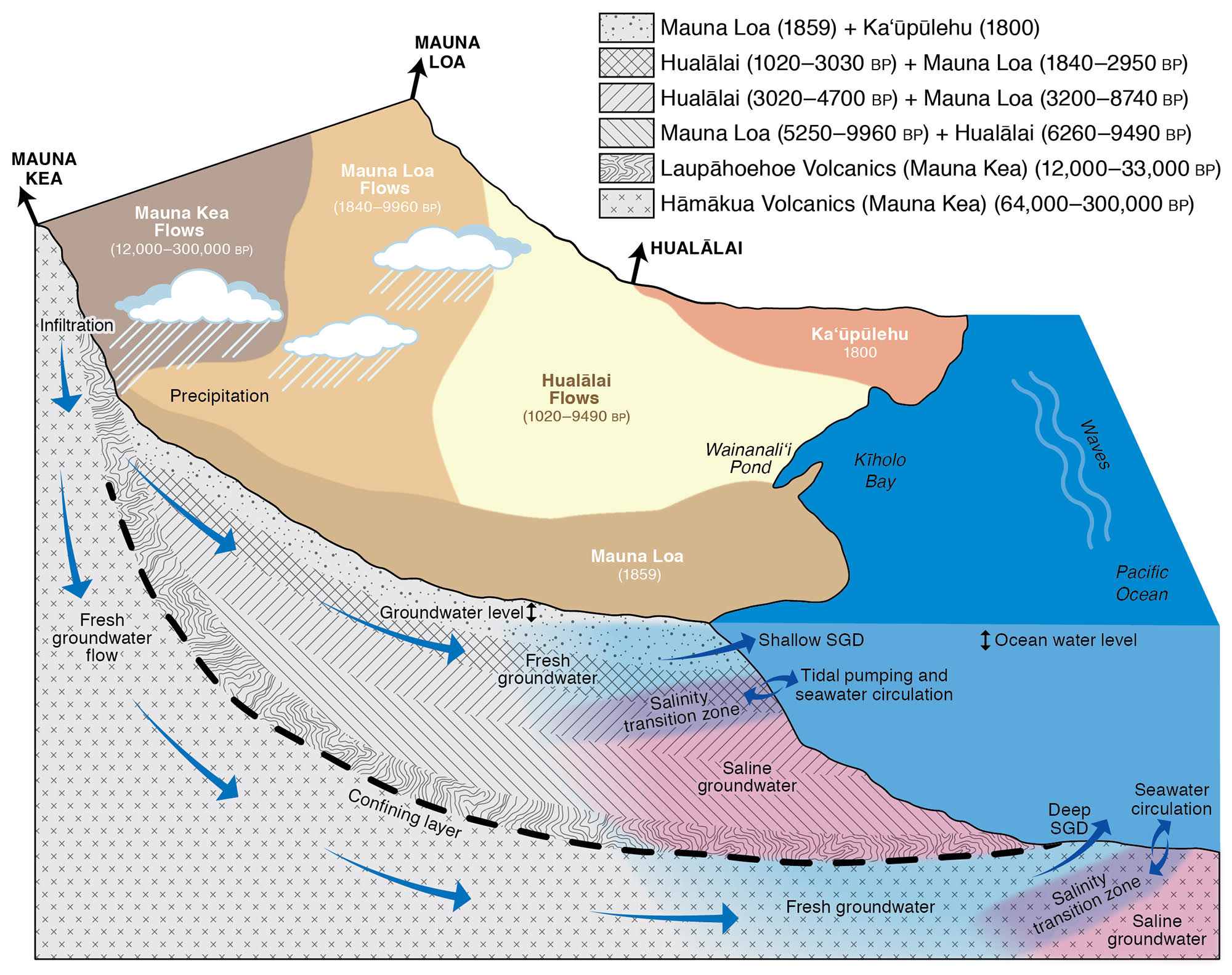 Groundwater is a vital resource for humans and ecosystems. Submarine groundwater discharge is a process by which water exits coastal aquifers and enters the ocean. This can be terrestrial freshwater or salty seawater that intruded into the porous aquifer at the ocean’s edge. A new study, published in Nature Scientific Reports by University of Hawai‘i at Mānoa researchers, showed that while precipitation and sea level drive coastal groundwater levels, it is sea level, especially tides, that play gatekeeper on the amount of groundwater discharging to Hawai‘i’s coastal zone.

The addition of groundwater to the nearshore nourishes coastal food chains, supporting many traditional Native Hawaiian aquacultural practices, such as loko iʻa (fishponds). However, coastal aquifers and submarine groundwater discharge are increasingly affected by climate variations and sea-level rise.

“While rainfall drives the amount of freshwater in the aquifer, it is difficult to understand and predict the volume and timing of submarine groundwater discharge due to the complex nature of seasonal seawater intrusion, tidal pumping, and wave set-up occurring on daily time scales,” said lead author Trista McKenzie, who was a postdoctoral researcher in the Department of Earth Sciences UH Mānoa School of Ocean and Earth Science and Technology (SOEST) and is currently a postdoctoral researcher at the University of Gothenburg, Sweden. “In places like West Hawai’i where aquifer structures are complex and unknown, long-term observations are the only way to characterize this process.”

In 2016, Henrietta Dulai, professor of Earth Sciences in SOEST, and colleagues constructed an autonomous radon monitor, which can be used to calculate the magnitude of submarine groundwater discharge. The instrument was deployed in Kīholo Bay for several years with the gracious support of Hui Aloha Kīholo and The Nature Conservancy and collected data at an unprecedented length and resolution.

The instrument captured a revealing set of data, as it was deployed through significant weather events and ocean conditions including tropical cyclones, a tsunami, king tides, droughts, an El Niño period, and sea-level anomalies. McKenzie and study co-authors, Dulai and Peter Fuleky, applied traditional and novel time-series analysis techniques to understand the patterns of submarine groundwater discharge—how it is affected by precipitation, tides, and waves and in turn, how it affects coastal salinity.

The researchers found when rainfall is low, groundwater discharge and coastal salinity are modulated entirely by tides, with largest discharge at low tide. When precipitation is above a threshold, it becomes a major driver pushing groundwater out of the aquifer and causing lower salinities at the coastline. This pattern is especially pronounced during El Niño periods.

Furthermore, during heavy rains, such as during tropical cyclones, coastal salinity decreases immediately due to freshwater flowing off the land surface. The team’s analysis also showed that high precipitation resulted in higher groundwater levels and a gradual increase in submarine groundwater discharge with a time lag of several weeks.

“Understanding patterns like these helps improve coastal aquifer management, which are the main water resource for the islands, as well as the management of coastal ecosystems and aquaculture,” said Dulai. “While Native Hawaiians were well aware of submarine groundwater discharge and were extremely successful in managing coastal resources for centuries, ongoing changes in precipitation patterns and sea-level rise due to climate change as well as groundwater withdrawal from the aquifer by humans lead to changes in submarine groundwater discharge patterns.”

The analyses presented in this research are the first step in understanding what to expect under normal and extreme climate events and the team is poised to apply the gained knowledge and work with coastal communities to apply these findings in their management decisions.