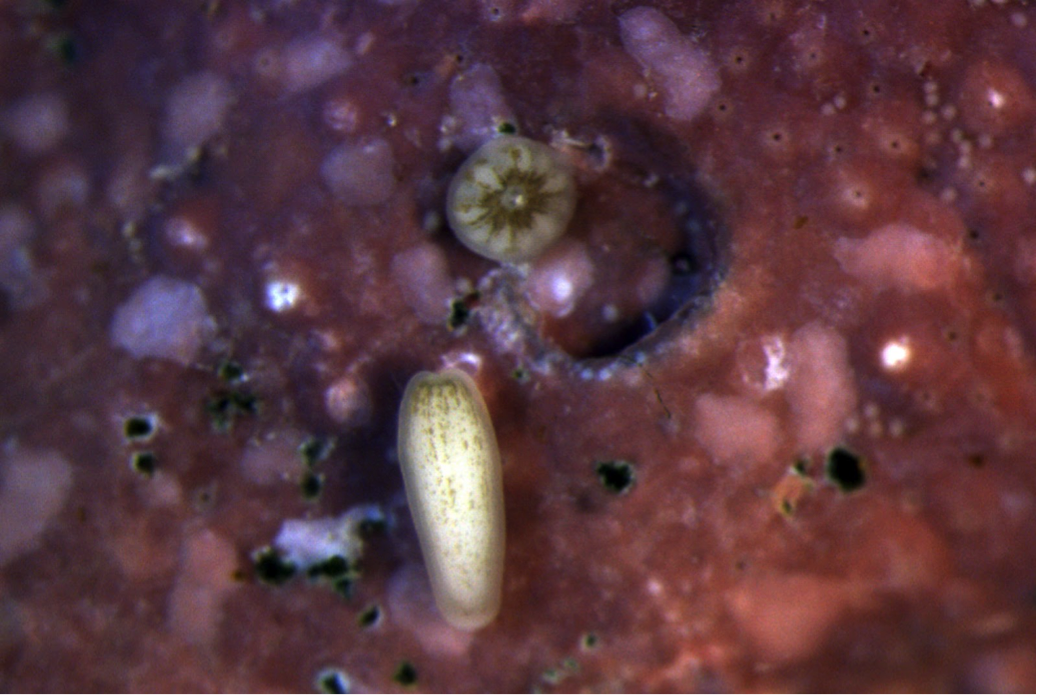 A swimming (bottom) and settling (top) coral larvae. The brown spots in the larvae are the symbiont algae, which this coral inherited from its parent. Credit: Raphael Ritson-Williams.

Corals are constantly exposed to multiple environmental stressors at any given time. On a global scale, climate change is increasing seawater temperatures which can cause coral to bleach. Locally, land-use practices can cause poor water quality run-off of land-based fertilizers and sediment washing over our coral reefs. A new study conducted by SOEST researchers found the survival and development of coral larvae in their first few days of life was negatively affected by elevated nutrients and a modest increase in water temperature.

Before reef corals build their hard, rocky skeletons they actually start their life as tiny, gelatinous larvae adrift in waters adjacent to coral reefs. The research team used larvae of three common Hawaiian coral species, starting at less than one-day old, and exposing them to various combinations of low or high nutrients and water temperatures. At the end of five days, the team determined how the individual and interacting stressors impacted coral during the first days of the life cycle for each species.

In particular, when nitrogen was high, coral larva showed the lowest survivorship. However, when phosphate was also added, the negative effects of nitrate were lessened. Surprisingly warming didn’t reduce survivorship, but the interaction of high temperature with nutrients affected larval growth, generally reducing larval size. This showed that nutrients can have serious impacts on coral larvae, but importantly the imbalance of nutrients and their interactions with temperature can harm corals at very early stages.

“The study also revealed that the way corals reproduce and other biological differences among larvae influence how they respond to environmental change,” said Chris Wall, study co-author and postdoctoral researcher at SOEST’s Pacific Biosciences Research Center. “The impacts of warming and elevated nutrients were greatest on small larvae that develop outside the parents, called broadcast spawners, and dependent on whether the larvae had already formed a relationship with their symbiotic algae. And interestingly, those larger larvae that develop inside their parents, called brooders, were quite resistant to warming and nutrient spikes.”

In adult corals, nutrient pollution can increase the negative effects of ocean warming, such as increasing the severity of coral bleaching. As marine heat waves and bleaching events have already become more common because of climate change, it is critical that conservationists and managers consider how reducing different forms of local impacts like pollution – such as nitrogen and phosphate from residential and agricultural runoff– can significantly affect adult corals and also the viability of coral larvae.

“Understanding the impacts of stressors on adult corals has been a primary focus of coral research, but this is just one piece of the puzzle,” said study co-author Madeline Piscetta. “In order to gain a comprehensive understanding of how temperature and nutrients will shape coral reefs, we need to examine these interactions across all life history stages.”

Read more on The Garden Island, UH News and Phys.org.