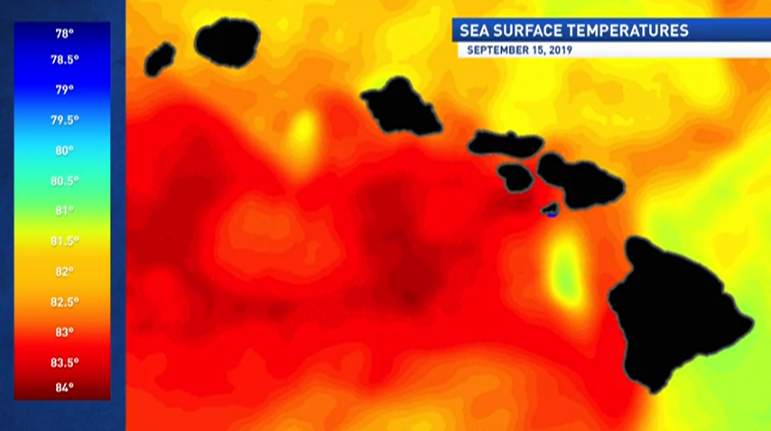 Frame of an animation showing increased sea surface temperatures around the main Hawaiian Islands during the summer of 2019. Courtesy of Climate Change, Explained: Marine heat waves.

Five years ago, a vast stretch of warm water emerged across the North Pacific Ocean, extending from Alaska to California to Hawai‘i. This marine heat wave, dubbed “The Blob,” was largely responsible for causing a mass coral bleaching event that ravaged nearly half of Hawai‘i’s coral reefs.

“The 2014-2015 ‘Blob’ as everyone’s come to call it, was a huge wake-up call for ocean heat waves,” said Jamison Gove, oceanographer for the National Oceanic and Atmospheric Administration (NOAA).

Now, a new expanse of unusually warm water is building in roughly the same area and has quickly become the second-largest marine heat wave in the last 40 years of recorded data. The new version of “The Blob” is not only being blamed for driving record heat in Hawai‘i this summer, but it’s already sparked what scientists fear is the start of another mass coral bleaching event.

Among the effects of these marine heat waves is believed to be coral bleaching, which occurs when corals are stressed from higher temperatures and will expel their symbiotic algae ― which provide a source of nutrients for the coral ― outside their tissues, causing the corals to turn stark white. Once that happens, coral are at considerable risk of death.

Up until the 1990s, coral bleaching was virtually unheard of ― especially in Hawai‘i.

“We were fortunate in that we were one of the last areas that experienced a mass coral bleaching events. Previously they had been observed at reefs all around the world, and the first really truly global event happened in 1998 during a very strong El Niño,” Franklin said. “And so that was the first point in which we started to, as a coral reef community, observe these things on a global scale.”

The fact that coral bleaching is now happening globally ― and not just in one geographic region ― must mean there’s a global factor driving the effect, he said.

Read more about it and watch the video highlights at Hawaii News Now.