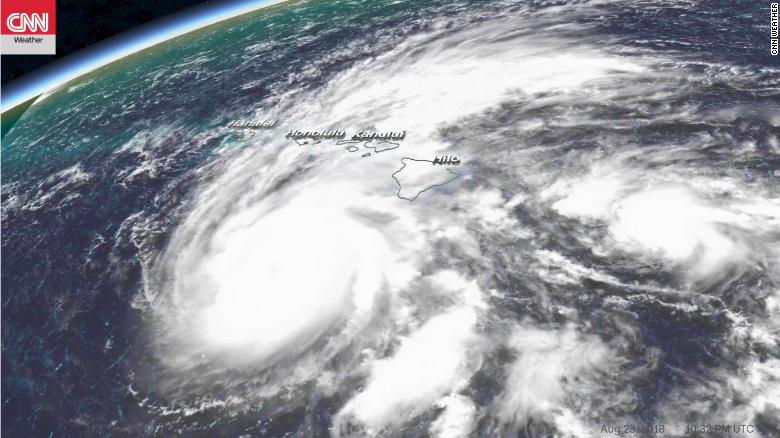 Hurricane Lane is shown in a satellite image from just after 11 am HT Thursday 23 August 2018.

Weather experts from the University of Hawaii at Mānoa School of Ocean and Earth Science and Technology (SOEST) shared their knowledge with the public as communities across the state awaited Hurricane Lane’s arrival.

Several faculty in the SOEST Department of Atmospheric Sciences have expertise in hurricanes, and tropical and island meteorology.

Assistant professor Alison Nugent was interviewed by the New York Times and KHON2 and was on-air with KHON2’s meteorologist for nearly six hours on Friday. She kept viewers up to date on the state of the storm; answered viewers questions; and explained hurricane graphics, the reasons for track uncertainty, storm hazards, and more.

“For example, by describing some basic atmospheric science topics, I was able to help viewers grasp the localized nature of wind and rain hazards due to the topography of the islands,” said Nugent. “The most exciting part was when the storm fell apart in front of our eyes on live TV. We could see the upper level clouds being sheared toward the northeast and the lower level clouds beginning to move westward as Hurricane Lane took a turn to the left.”

Steven Businger, professor and chair of the department, discussed (here and here) Hurricane Lane and whether Mauna Kea and Mauna Loa on Hawai‘i Island “protect” the islands from storms. The discussion centered around the influence of environmental winds on the track and wind shear on the intensity of the storm. In particular, as the storm weaken through the action of wind shear as it neared Oahu, its depth became shallower and the low level flow from the NE took over in steering the storm to the west.

Assistant professor Jennifer Griswold and professor Pao-Shin Chu were interviewed for a Civil Beat article and assistant professor Christina Karamperidou spoke with SkyNews during a live broadcast. They shared various tools, apps and webpages for the general public to follow the storm; as well as explanations of how Lane was progressing.

Dennis Hwang, faculty at Hawaii Sea Grant, spoke with television, radio, and ThinkTech Hawaii hosts to help people before the hurricane, and now after, to prepare their homes based on the Homeowner’s Handbook to Prepare for Natural Hazards (here and here). Additionally, he also put together a shelter-in-place table to help people understand if they are safe in their homes or should seek shelter elsewhere, based on how their home was constructed (here).

Chu explained the vertical structure of a mature hurricane and how upper level shear (winds at different altitudes moving in opposite directions) can disrupt the organized structure of a hurricane. “Even though we ‘dodged a bullet’ from Lane, the hurricane season is not over until the end of November and we still have to be vigilant about the future storms,” said Chu.