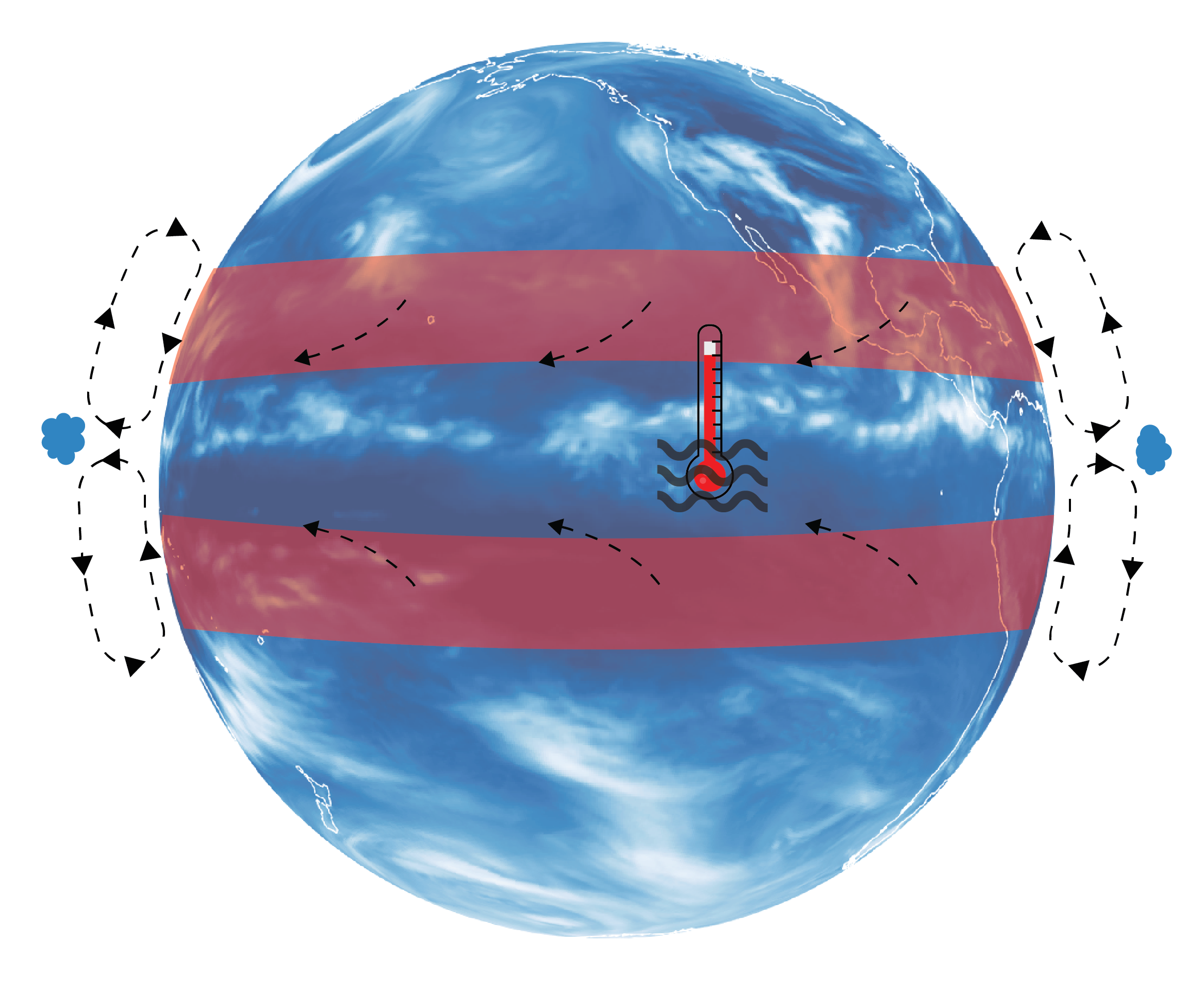 Subtropical warming leads to a weakening of the atmospheric Hadley cell, less clouds in most of the tropics, a reduction in the upwelling of cold ocean water, and a resulting increase in tropical temperatures. This process explains the accelerated tropical warming found in climate models in response to increase greenhouse gas emissions. Credit: Stuecker et al. (2020).

Scientists published a study this week in Nature Climate Change revealing future climate change in the tropics will be accelerated by warming in the nearby subtopics.

In response to future fossil fuel burning, climate computer models simulate a pronounced warming in the tropical oceans. This warming can influence the El Niño phenomenon and shift weather and rainfall patterns across the globe. Despite being robustly simulated in computer models of the climate system, the origin of this accelerated tropical warming has remained a mystery. The international research team, led by Malte Stuecker, new assistant professor of oceanography in the University of Hawai‘i at Mānoa School of Ocean and Earth Science and Technology (SOEST), concluded that climate change outside the tropics is the main culprit.

Earth’s future warming will not be identical everywhere. Atmospheric and oceanic circulation changes, as well as cloud processes, will determine which regions will warm faster and which ones will experience a delayed warming relative to the global mean. Focusing on the tropical regions, a team of scientists developed a new method that separates the contributions from local and remote physical processes that cause warming in a given region.

The team found that the expected future warming in the tropics (15oS-15oN) originates mostly from warming that occurs in subtropical regions (16oN-32oN and 16oS-32oS).

“To understand this surprising phenomenon, one has to understand how different areas interact with each other climatically,” said Stuecker, who was at the IBS Center for Climate Physics (ICCP) at Pusan National University in South Korea while conducting the study.

A large-scale atmospheric circulation feature referred to as the Hadley cell and its surface branch, known as trade wind circulation, transport relatively dry subtropical air to the tropics. Due to the effects of earth’s rotation, trade winds also cause upwelling of cold subsurface waters in the tropical Pacific and Atlantic.

This will lead to a weakening of the surface trade winds, less upwelling of cold ocean water, and a resulting warming of the sea surface. In addition, a weaker Hadley cell also means that less humid air is rising, and cloud coverage is reduced in most of the tropics, increasing the amount of sunlight reaching the surface.

“This can further exacerbate future warming in the tropics”, says Axel Timmermann, director of the ICCP and co-author of the study.

To arrive at these conclusions, the authors used a computer model of the global climate system and ran it for present-day and future CO2 conditions. By imposing the extra energy related to the CO2 change, either in the tropics or subtropics, the team then found that human-induced subtropical warming causes about 40% more future tropical surface ocean temperature change than if the same amount of extra energy would enter Earthʻs atmosphere directly in the tropics.

The study presents a new paradigm to understand the patterns of future global warming and the arising regional differences.

“Warming in one area can affect the degree of warming in another place. We are starting to appreciate how strongly different areas are connected in the climate system” said Fei-Fei Jin, co-author and atmospheric sciences professor at UH Mānoa SOEST.