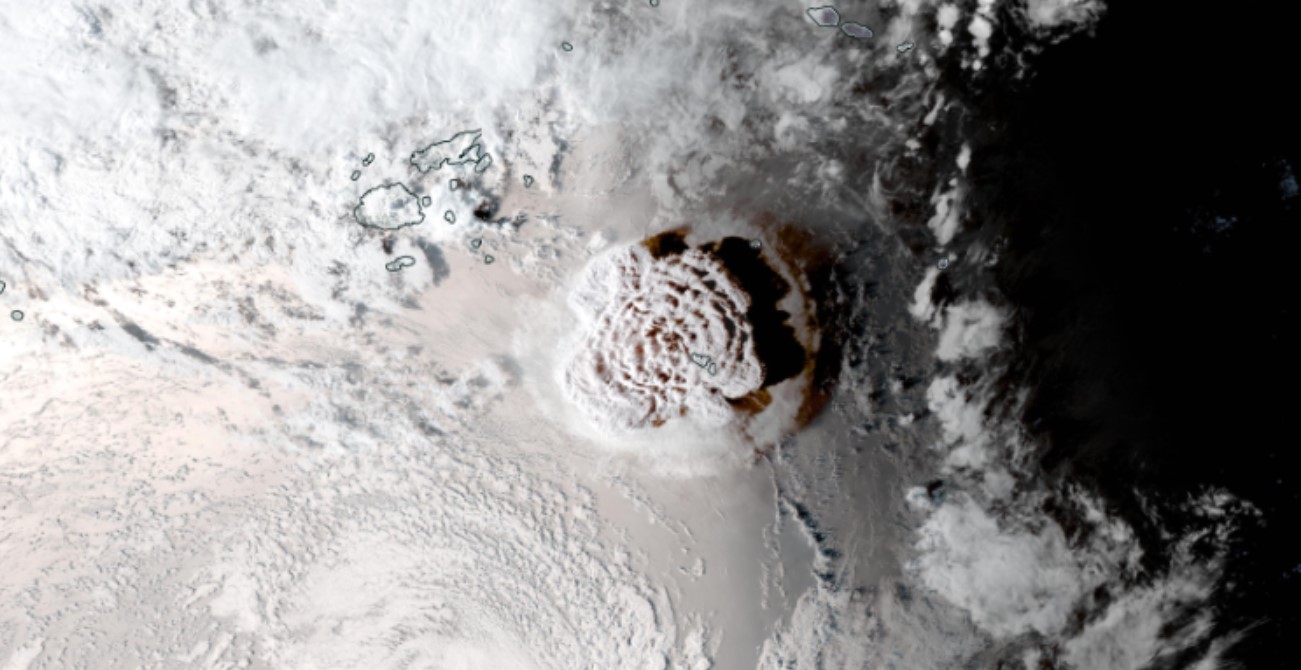 The catastrophic eruption of the Hunga Tonga–Hunga Ha’apai volcano in 2022 triggered a special atmospheric wave that has eluded detection for the past 85 years. Researchers from the University of Hawai‘i (UH) at Mānoa, Japan Agency for Marine–Earth Science and Technology (JAMSTEC), and Kyoto University relied on state-of-the-art observational data and computer simulations to discover the existence of Pekeris waves—fluctuations in air pressure that were theorized in 1937 but never proven to occur in nature, until now.

The eruption in the South Pacific earlier this year released what was likely the most powerful explosion the world has experienced since the famous 1883 eruption of Mt. Krakatau in Indonesia.  The rapid release of energy excited pressure waves in the atmosphere that quickly spread around the world.

The atmospheric wave pattern close to the eruption was quite complicated, but thousands of miles away the disturbances were led by an isolated wave front traveling horizontally at over 650 miles an hour as it spread outward. The air pressure perturbations associated with the initial wave front were seen clearly on thousands of barometer records throughout the world.

Watch an animation of the global atmosphere after the Tonga eruption

“The same behavior was observed after the Krakatau eruption and in the early 20th century a physical theory for this wave was developed by the English scientist Horace Lamb,” said Kevin Hamilton, emeritus professor of atmospheric science at the UH Mānoa School of Ocean and Earth Science and Technology. “These motions are now known as Lamb waves.  In 1937, the American-Israeli mathematician and geophysicist Chaim Pekeris expanded Lamb’s theoretical treatment and concluded that a second wave solution with a slower horizontal speed should also be possible. Pekeris tried to find evidence for his slower wave in the pressure observations after the Krakatau eruption but failed to produce a convincing case.”

In the recent study, published in the Journal of the Atmospheric Sciences,  the team of scientists applied a broad range of tools now available including geostationary satellite observations, computer simulations and extremely dense networks of air pressure observations to successfully identify the Pekeris wave in the atmosphere following the Tonga eruption.

“When we investigated the computer simulated and observed pulses over the entire Pacific basin, we found that the slower wave front could be seen over broad regions and that its properties matched those predicted by Pekeris almost a century ago,” said Hamilton.

Once the Pekeris wave was identified in the post-eruption aftermath the researchers realized that this result had more general implications for the motions in the atmosphere.  Specifically, they predicted that there should be set of corresponding global oscillations or modes of the atmosphere on times scales of several hours to days.  Analysis of long records of atmospheric pressure by study co-author Takatoshi Sakazaki, associate professor in the Graduate School of Science of Kyoto University, revealed the presence of the predicted set of oscillations.

“In our paper we propose a standard terminology of Lamb wave and Pekeris wave for the two solutions,” said Hamilton. “Chaim Pekeris later became world famous and is today regarded as ‘the father of Israeli geophysics’, but he did his calculation of the volcanic wave response as a very young researcher at MIT where he was known for his admiration for the earlier work of Lamb.  It is fitting that our discovery and our proposed nomenclature would permanently connect Chaim Pekeris with his scientific hero, Horace Lamb.”