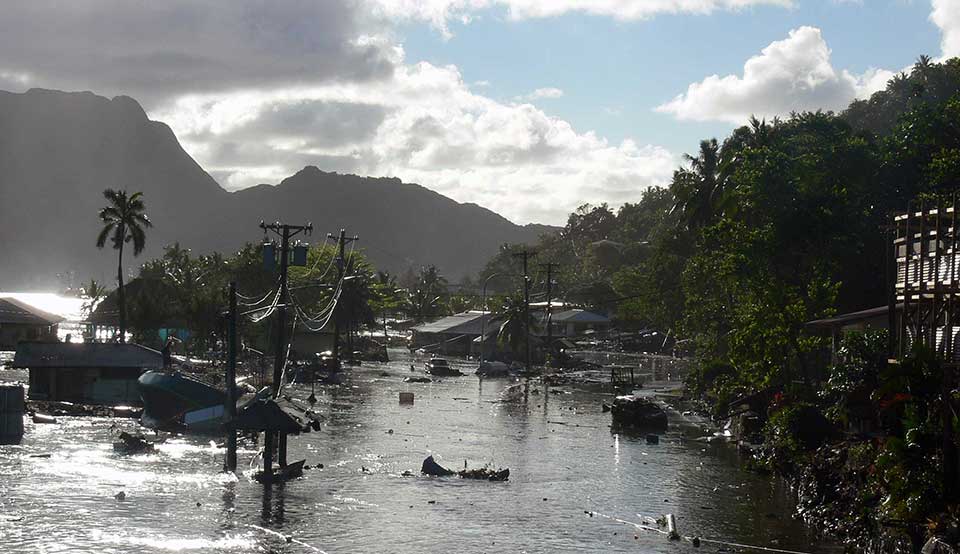 On September 29, 2009, a tsunami caused substantial damage and loss of life in American Samoa, Samoa, and Tonga. The tsunami was generated by a large earthquake in the Southern Pacific Ocean. Credit: NOAA

Earthquakes of similar magnitude can cause tsunamis of greatly varying sizes. This commonly observed, but not well-understood phenomenon has hindered reliable warnings of local tsunamis.

Research led by University of Hawai‘i (UH) at Mānoa scientists provides new insight that connects the characteristics of earthquakes—magnitude, depth where two tectonic plates slip past each other and the rigidity of the plates involved—with the potential size of a resulting tsunami.

Previous researchers identified a special class of events known as tsunami earthquakes, which produce disproportionately large tsunamis for their magnitude. Kwok Fai Cheung, SOEST professor in Ocean and Resources Engineering (ORE), Thorne Lay from the University of California – Santa Cruz and co-authors, including ORE postdoctoral researcher Yoshiki Yamazaki, discovered a straightforward explanation for this conundrum. Their findings were published recently in Nature Geoscience.

Using computer models, the team incorporated physical processes that produce earthquakes and tsunamis with a wide range of observations of real-world events, including those classified as tsunami earthquakes. The model results demonstrated that for a given earthquake magnitude, if the rupture extends to shallow depth in the less rigid part of the plate, the resulting tsunami is larger than if the rupture is deeper.

“In a subduction zone, the upper plate is thinner and less rigid than the underthrusting plate near the trench,” explained Cheung. “A concentrated near-trench or shallow rupture produces relatively weak ground shaking as recorded by seismometers, but the displaced water in the overlying deep ocean has enhanced energy and produces shorter tsunami waves that amplify at a high rate as they move toward the shore.”

“Earthquake and tsunamigenic processes are complex, involving many factors that vary from one event to another,” said Lay, professor of Earth and Planetary Sciences at UC Santa Cruz. “We utilized a simplified numerical model to isolate key earthquake parameters and evaluate their importance in defining tsunami size.”

Having verified that the presence of shallow earthquake rupture can be a more significant factor than the earthquake magnitude for the resulting tsunami size led the researchers to an important question: Can earthquake magnitude continue to be used as the primary indication of potential tsunami impacts?

“The practice of using earthquake magnitude to estimate potential tsunami threat has led to poor predictive capability for tsunami impacts, and more information about the source is required to do better,” said Cheung.

An important aspect of this interdisciplinary research is the synergy of expertise in seismology, with Lay, and tsunamis, with Cheung’s research group, applied to a large set of observations. This study motivates development of new seismological and seafloor geodesy research that can rapidly detect occurrence of shallow rupture in order to achieve more reliable tsunami warning.

While shorelines throughout the Pacific Ocean and along the “Ring of Fire” are vulnerable to tsunamis, the situation is most critical for coastal communities near the earthquake, where the tsunami arrives quickly—when detailed information about the earthquake is not yet available.