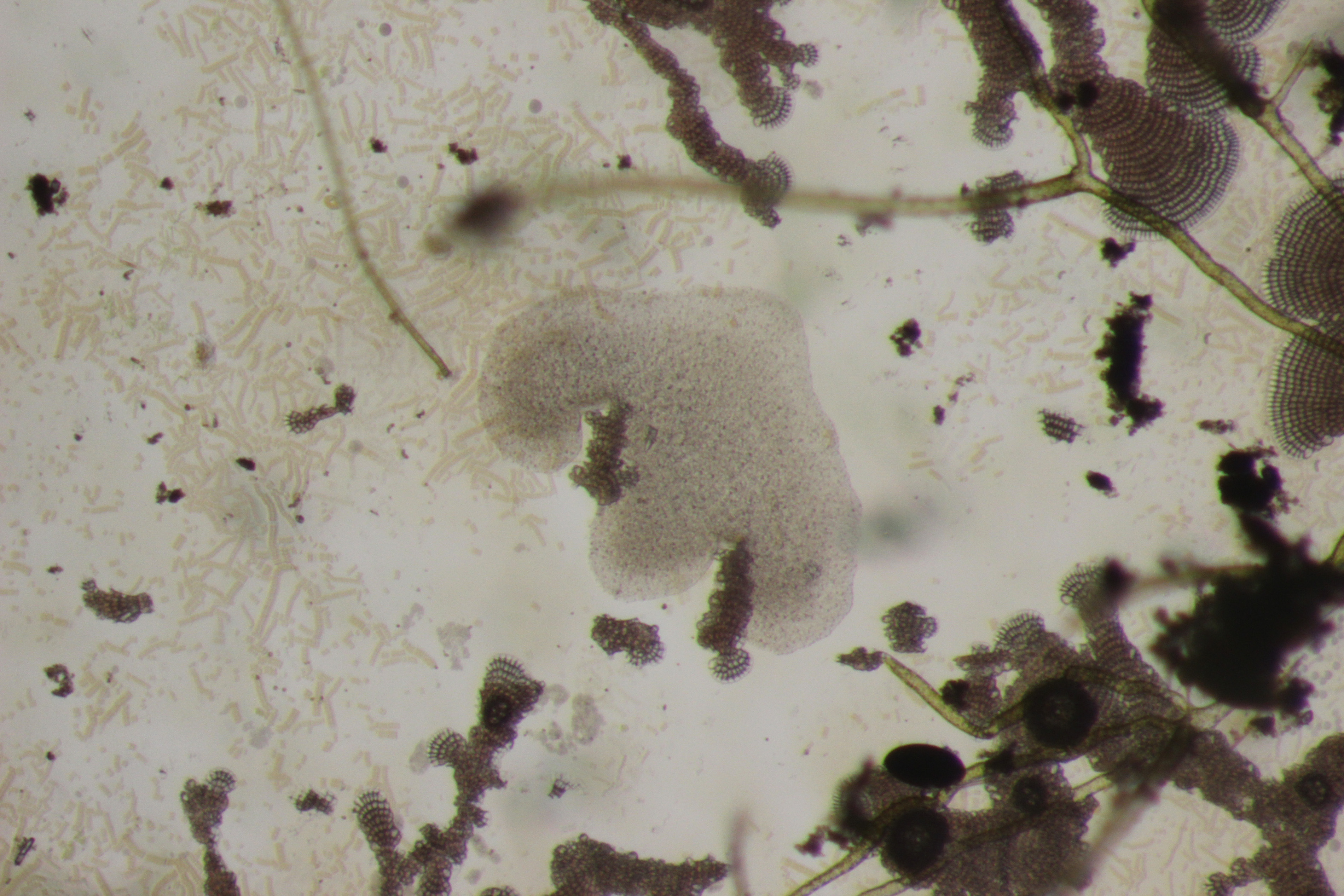 Trichoplax crawling near other organisms among which it typically lives. Credit: Michael Hadfield.

In a new study published in Nature Microbiology, researchers from the University of Hawai‘i (UH) at Mānoa School of Ocean and Earth Science and Technology (SOEST), the Max Planck Institute for Marine Microbiology in Bremen, Germany, and North Carolina State University revealed that Trichoplax, one of the simplest animals on Earth, is not as simple as it looks.

Trichoplax lives in a remarkably sophisticated symbiotic relationship with two types of highly unusual bacteria. The first, Grellia incantans, is related to highly parasitic bacteria that cause typhus and Rocky Mountain spotted fever. But intriguingly, Grellia does not appear to harm Trichoplax. The second bacterium, Ruthmannia eludens, sits inside the cells Trichoplax uses to ingest and digest its food. Both symbionts belong to poorly described groups of bacteria that are not well understood.

Trichoplax looks like an irregular flattened balloon. It lives in warm coastal waters around the world, where it grazes on microscopic algae that cover rocks, seaweeds and other firm surfaces. Although most aquarists may not know it, Trichoplax can also be found in many saltwater aquaria with corals. Trichoplax, together with sponges and jellyfish, belongs to one of the most basal lineages of the animal kingdom. Typically less than a millimeter in diameter, these animals lack a mouth, gut and other organs, and are made up of only six different cell types. Its simplicity makes it a popular model organism for biologists.

Michael Hadfield, researcher at the Kewalo Marine Laboratory (KML) in SOEST’s Pacific Biosciences Research Center, had long known that Trichoplax could be collected in the lab’s seawater tanks. Hadfield, together with researcher Margaret McFall-Ngai, also at KML, began the study by asking, “What are the bacteria doing inside some of the most essential cells in Trichoplax’s body?” Supplying all of the original Trichoplax for the study, they invited a collaboration with an international group of scientists at the Max Planck Institute for Marine Microbiology: Harald Gruber-Vodicka, Niko Leisch and Nicole Dubilier.

Together, they have now investigated the bacterial tenants of Trichoplax by sequencing their genomes and using high-resolution microscopy to see where they live.

“It was interesting enough that such a simple organism lived in constant association with many bacteria in each of its fiber cells, which serve both as the nerves and muscles of Trichoplax,” noted Hadfield, “and even more surprising to discover a second very different bacterium living in the cells that take up and digest Trichoplax’s food.”

One symbiont lives inside the endoplasmic reticulum (ER) of Trichoplax and is the first symbiont known to live in an animal’s ER. The ER plays a central role in protein and membrane production for the cell. Proving that Grellia is truly in the ER was challenging.

“We reconstructed a detailed three-dimensional model of the ER to show that Grellia lives inside of it, supported by the electron microscopy facility of the Max Planck Institute of Molecular Cell Biology and Genetics in Dresden,” Niko Leisch explained. “Other parasitic bacteria imitate the structure of the ER to trick the hosts into thinking they are not harmful. However, our imaging data clearly showed that Grellia truly lives inside its host’s ER.”

Intriguingly, Grellia, although closely related to parasites, doesn’t appear to be harmful for Trichoplax.

The second symbiont of Trichoplax, Ruthmannia, belongs to a group of bacteria that were only recently discovered, the Margulisbacteria.

“Before our study, Margulisbacteria were part of the so-called microbial dark matter – the vast majority of microbial organisms that biologists find through sequencing, but are unable to culture,” explained Harald Gruber-Vodicka. “We have never actually seen them, even though their genetic traces were found in aquatic samples all over the globe.”

This new paper provides the first images of a Margulisbacteria. Living in the cells that Trichoplax uses to digest its algal food, Ruthmannia appears to only eat the fats and other lipids of the algae and leaves the rest to its host. In return, Ruthmannia may provide Trichoplax with vitamins and amino acids.

“With all of this fascinating new information, we still don’t know if Trichoplax can live without either of its internal bacteria,” Hadfield added. “Answering this question will be a priority.”