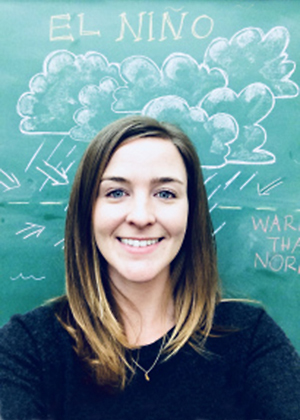 Atmospheric Sciences graduate student Madeline McKenna is among the three students from the University of Hawai‘i at Mānoa who were awarded grants from Future Investigators in NASA Earth and Space Science and Technology (FINESST) program.

In the categories of Earth Science and Astrophysics, UH Mānoa students from SOEST, the Institute for Astronomy (IfA), the Department of Physics successfully competed for the grants which offer $45,000 per year for up to three years. NASA provides these funds to support graduate student-designed research projects that contribute to NASA Science Mission Directorate’s science, technology, and exploration goals.

“FINESST funding is quite competitive, so receiving three awards is indeed a great achievement for UH!” said Christina Karamperidou, assistant professor of Atmospheric Sciences in SOEST.

The FINESST grant to principal investigator Karamperidou and her doctoral student McKenna as future investigator will support their investigation of persistent weather phenomena, called atmospheric blocking events, which cause the mid-latitude jet streams to divert from their typical paths, often producing extreme weather such as heat waves, cold spells, droughts, and floods. The goal of their research is to assess the relationship between El Nino and blocking events, and how this impacts the occurrences of extreme weather.

“Throughout my academic career, my interest has been in the global Earth climate system, and how better understanding of environmental processes can benefit society,” said McKenna. “This FINESST award will provide the necessary support for continuing my dissertation research, as well as travel assistance to present and network at conferences and to attend climate modeling workshops.”

IfA astronomer Daniel Huber and his graduate student Travis Berger received the award to support their research to improve our understanding of both the stars and extrasolar planets studied by the planet-hunting Kepler space telescope.

Physicist Philip von Doetinchem and his graduate student Cory Gerrity were also awarded the Future Investigator grant. They will try to detect antimatter particles, in particular antideuterons, in cosmic rays which could be produced through annihilations and decays of the dark matter that dominates the mass of the universe.