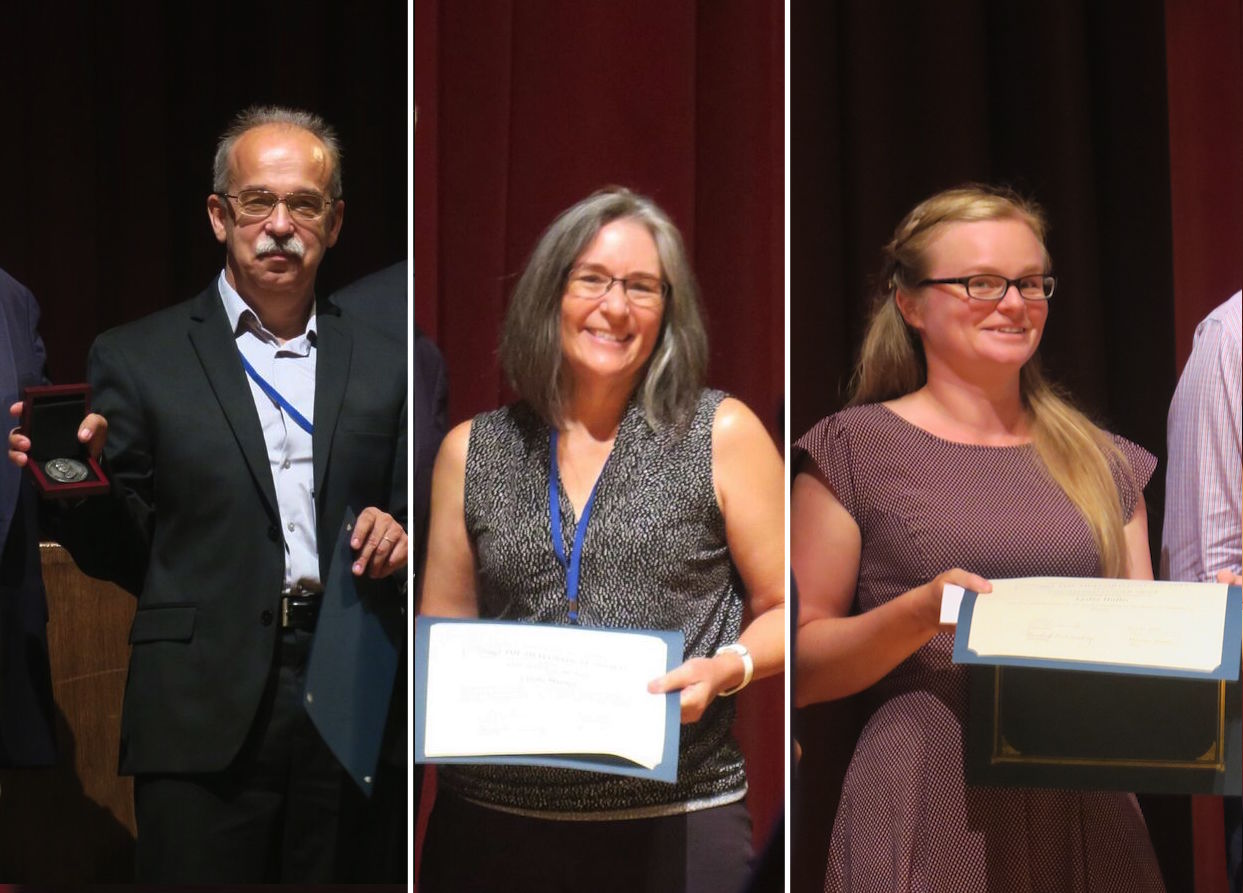 Two SOEST scientists and one former postdoctoral fellow were recipients of awards at the 81st annual meeting of the Meteoritic Society, an international organization devoted to studies of meteorites and planetary science. The society was founded in 1933 and has over 1,000 members from 52 countries.

Planetary scientist Alexander (Sasha) Krot was awarded the Leonard Medal, which is given for outstanding contributions to the science of meteoritics and closely allied fields. Krot, a research professor in the Hawai‘i  Institute of Geophysics and Planetology (HIGP) within SOEST, studies meteorites and cosmochemistry, with a focus on processes that took place before and while the planets were forming.

An HIGP faculty member since 1997, Dr. Krot has over 35 years of distinguished research experience. He is recognized as one of the leading researchers of meteorites in the field of cosmochemistry, an interdisciplinary science that overlaps with geology, astronomy, and astrophysics to discover the fundamental processes that formed our solar system. Dr. Krot is renowned for combining detailed studies of meteorites with broad interpretations of solar system formation.

Professor Kevin McKeegan of UCLA noted in his citation of Dr. Krot’s contributions, “Sasha Krot’s research has changed the way scientists think about the records preserved in meteorites.”

“The award of the Leonard Medal to Sasha Krot is a recognition of his enormous contributions to understanding the fundamental processes involved in forming our solar system,” said Rob Wright, director of HIGP. “It also recognizes his incredible research productivity, with over 200 publications, many in the prestigious journals Science and Nature.”

Dr. Krot has also been awarded an Alexander von Humboldt Research Award in recognition of lifetime achievements in research. He is currently beginning a six-month sabbatical at Johann Wolfgang Goethe University Frankfurt am Main, Germany, where he will collaborate with professor Frank E. Brenker.

Linda Martel, Academic Support in HIGP, was given Meteoritical Society’s Service Award. The Service Award bestowed on members who have advanced the goals of the Society to promote research and education in meteoritics and planetary science in ways other than by conducting scientific research. In Ms. Martel’s case it was because of her central role in creating Planetary Science Research Discoveries (PSRD), an educational website for the public. The online magazine focuses on informing the public about what meteoriticists do. It explains the discoveries made through the study of extraterrestrial materials, including how those discoveries lead to an improved understanding what we have learned from study of extraterrestrial samples including meteorites, lunar samples, cosmic dust, and samples returned by spacecraft.

The PSRD website averages 45,000 pages viewed per month of 300 articles posted in the 22 years it has been online. It is used widely by professors of science courses who use PSRD articles as class reading assignments. The site is linked to by university libraries in the U. S. and abroad, public libraries, course syllabi, science resource lists, blogs, and science.

“None of this would be possible without Linda Martel!” HIGP research professor and PSRD co-founder Jeff Taylor said.  “She co-founded PSRD and wrote the tagline that succinctly summarizes our approach: Planetary scientists sharing ideas and discoveries.”

Ms. Martel has also been active in research at HIGP, focusing on lunar science and prospecting for lunar resources. She was a member of the 2001 Antarctic Search for Meteorites field team in Antarctica.

Lydia Hallis, faculty member at Glasgow University in Scotland, was awarded the society’s Nier Prize, which recognizes outstanding research in meteoritics and allied fields by young (under age 35) scientists. Dr. Hallis was a postdoctoral researcher in HIGP and the UH Institute for Astronomy from 2010 to 2014, and still collaborates with UH faculty members. Her research includes studies of lunar rocks, meteorites from Mars, the role of water in altering the Martian surface, and on how Earth received its water.

“Lydia is a superb scientist,” Jeff Taylor said of Hallils. “She is one of the top planetary scientists of her generation.”