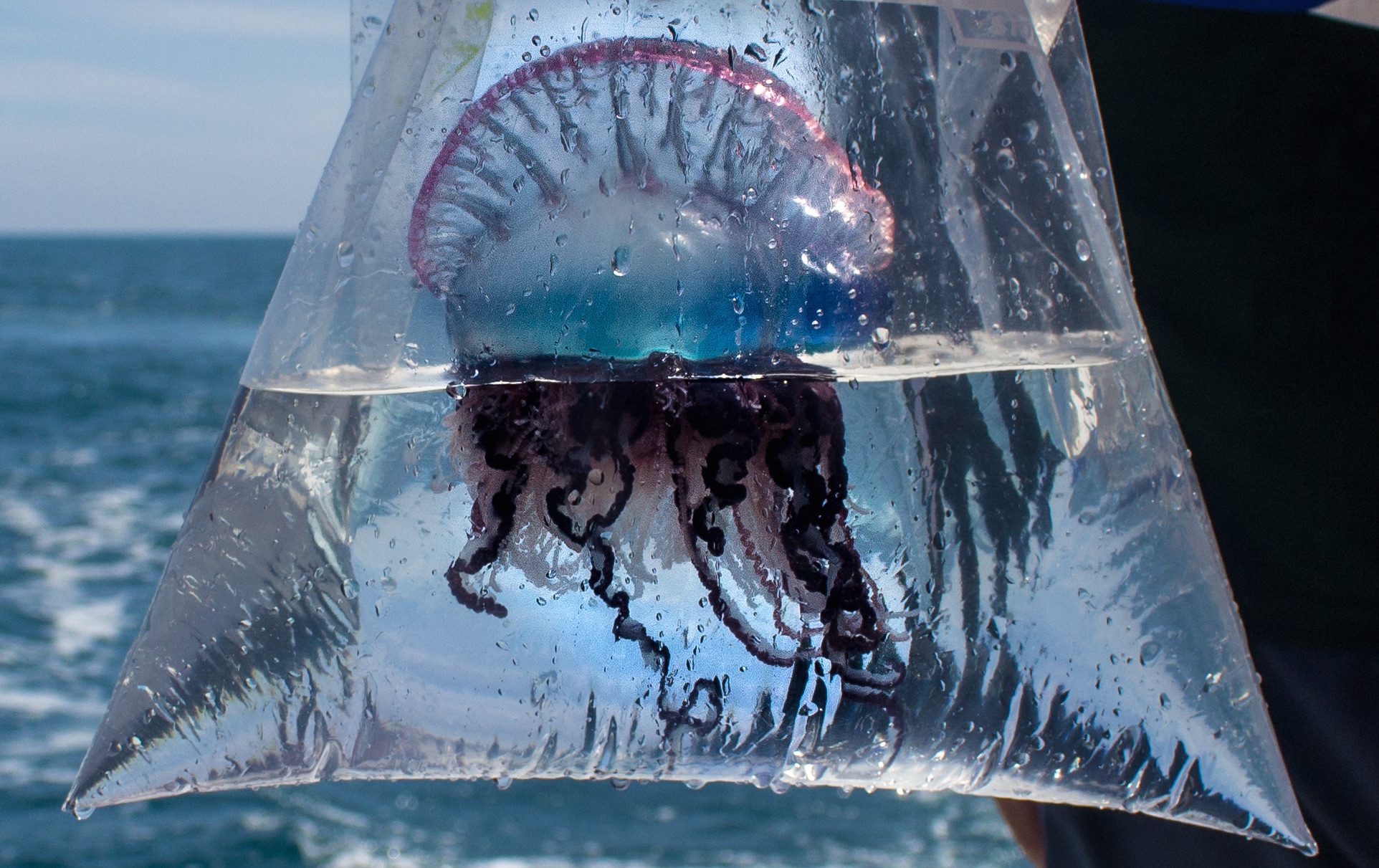 In recent decades, trusted first aid resources have recommended stings from man o’ war (Physalia species) be treated differently from other jellies. But when researchers at the University of Hawai‘i – Mānoa (UHM) dug into the scientific literature, they found scant evidence to support such individualized first aid. Adding to a recent push for evidence-based sting treatments, members of the Pacific Cnidaria Research Laboratory (PCRL) at UHM teamed up with colleagues in Ireland to investigate which commonly recommended first aid actions (such as rinsing with seawater) are the most effective for Physalia stings. Their results, published this week in the journal Toxins, defy the recent abandonment of historic advice, and suggest that man o’ war stings are no different than other jellyfish stings; the best first aid is to rinse with vinegar to remove any residual stingers or bits of tentacle left on the skin and then immerse in 45°C (113°F) hot water or apply a hot pack for 45 minutes.

Physalia (Physalia utriculus, also called bluebottles in the Pacific or Physalia physalis, Portuguese man o’ war in the Atlantic) are among the most recognizable stinging jellies with their bright blue tentacles and colorful inflated floating sails. Strandings of bluebottles are common in Hawai‘i as the onshore winds push thousands of these small, painful critters onto the beaches. Similar mass strandings are frequent with the Atlantic species too, and have been known to cause hundreds of stings in a single day on beaches from Florida to France.

“Physalia are often listed as exceptions to any blanket first aid recommendations for jellyfish stings,” said Christie Wilcox, lead author of the paper and postdoctoral fellow with PCRL at UHM. But such assertions aren’t based in rigorous research, she said.

“Without solid science to back up medical practices, we have ended up with conflicting official recommendations around the world, leading to confusion and, in many cases, practices that actually worsen stings or even cost lives,” said Angel Yanagihara, senior author, head of the PCRL and assistant research professor at the UHM Pacific Biosciences Research Center (PBRC) and John A. Burns School of Medicine (JABSOM).

A few years ago, Yanagihara set about to scrutinize jellyfish sting treatments properly, and designed a set of experimental assays that allow the researchers to quantify stinging and venom activity in real time. First tested with dangerous box jellyfish, these assays have allowed the PCRL team to determine which commonly recommended practices, such as applying heat, help mitigate box jelly stings, and which, such as applying urine or scraping away tentacles, only make box jelly stings worse. Applying these assays to man o’ war stings was the obvious next step.

So Yanagihara teamed up with Tom Doyle, a jellyfish scientist and lecturer with the National University of Ireland (NUI) Galway. In 2008, Doyle set up the Jellyfish Advisory Group, a collection of medical practitioners and experts that helps advise Irish protocols for sting first-aid and treatment. Together, they proposed a project to the International Fulbright Specialist program and when Yanagihara was awarded a Fulbright Specialist Award, she went to NUI Galway to share newly developed assay techniqes with Doyle and his doctoral student, Jasmine Headlam. Headlam and Doyle performed experiments using the Atlantic man o’ war in parallel with those conducted by Wilcox and Yanagihara in Hawai‘i.

The results from opposite sides of the world lined up beautifully: the venom delivered by a man o’ war sting was lessened if the sting site was rinsed with vinegar, regardless of which species of Physalia was used. Even better, if you have it available, was Sting No More® Spray, a combined stinging capsule and venom-inhibiting product developed by Yanagihara with Department of Defense funding. Seawater rinsing, on the other hand, spread stinging capsules over more area and thus made stings, much worse. To treat stings after rinsing away the tentacles, both groups found 45 minutes of 45°C (113°F) heat application effectively inactived already-injected venom, while the application of ice packs made stings worse.

“Given that most recommendations expressly forbid the use of vinegar and recommend seawater rinses, these findings completely upend current protocols,” said Yanagihara.

“This is quite a U-turn for me,” explained Doyle, as he helped write the current Irish protocols almost ten years ago, which unfortunately recommend the worst possible combination of steps: seawater rinsing followed by ice pack treatment. “In the coming weeks, I look forward to meeting with members of the Jellyfish Advisory Group to discuss our new findings and how we can revise the current protocols.”

Back in Hawai‘i, Wilcox and Yanagihara have already started studying the next stinging jellies on their list. As they’ve examined two of the three main classes of dangerous stingers, they have their sights set on the last remaining class: true jellyfish (class Schyphozoa). Again collaborating with Headlam and Doyle, they are working on evidence-based first aid measures for lion’s mane (Cyanea capillata), the one of largest jellyfish in the world.

Sting No More® Spray and Cream formulations (Alatalab Solutions, LLC) were developed under a Department of Defense grant that aimed to rapidly and effectively treat stings in US Special Operations Command combat divers. With the intention of supporting the development of technologies and therapies of benefit to people, the funding required a commercialization plan for resulting products. All testing of the new commercial product, in the current study was performed under an approved University of Hawai‘i Conflict of Interest plan. This product demonstrates the strongly pro-innovation culture at UH dedicated to bringing to the public sector technologies that have been developed with federal and state research dollars.