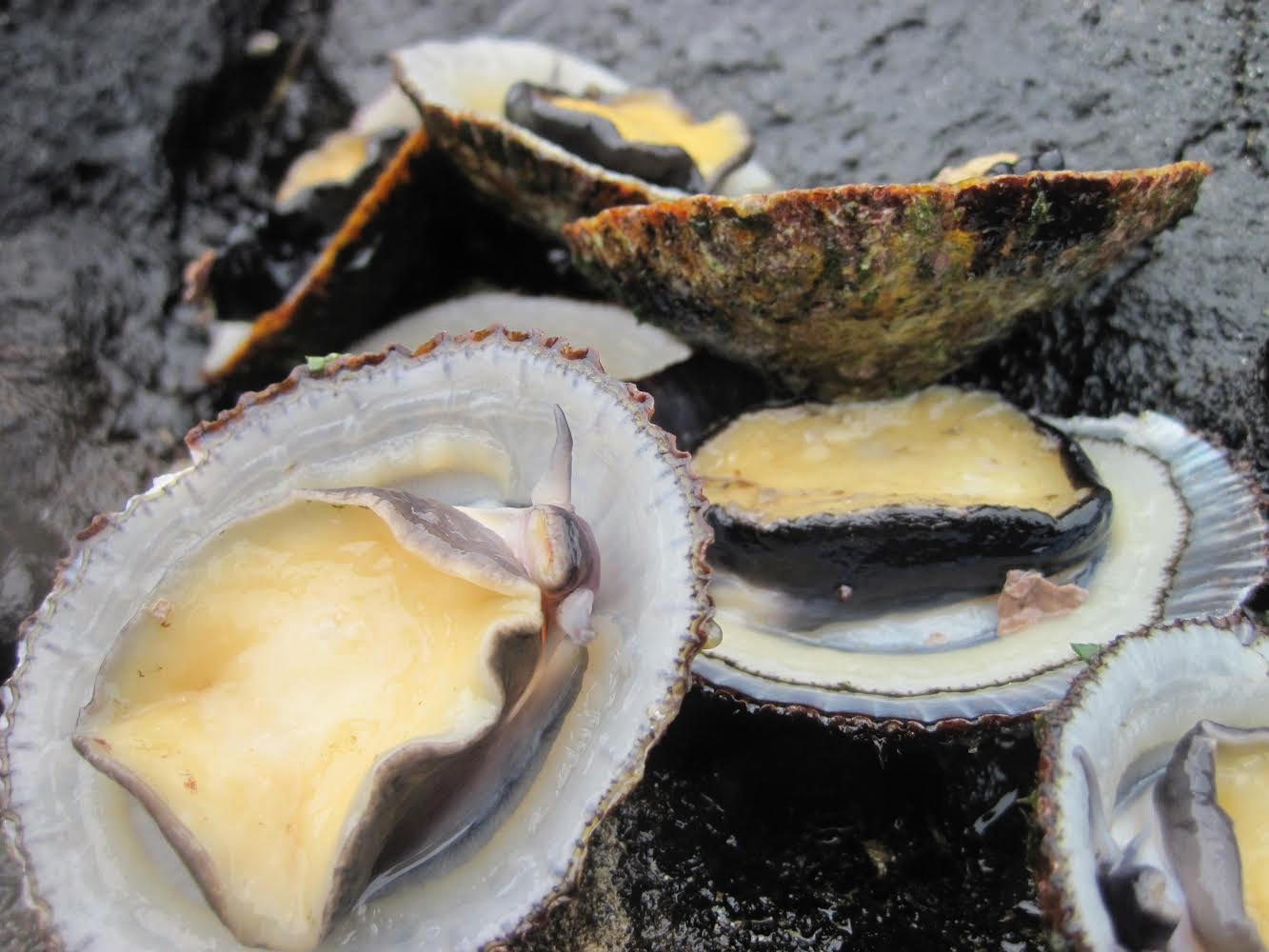 The distinctive yellow foot of the ʻopihi ʻālinalina, a popular Hawaiian delicacy, is apparent when removed from the rocks. Credit: Kanoe Morishige.

Crashing waves and water temperature along rocky shorelines strongly influence the growth patterns of the yellowfoot limpet (Cellana sandwicensis), or ʻopihi ʻālinalina, an intertidal species endemic to the Hawaiian Islands. That is the primary conclusion of a study published in Nature Communications Earth & Environment by researchers from the University of Hawaiʻi at Mānoa School of Ocean and Earth Science and Technology (SOEST) and College of Tropical Agriculture and Human Resources (CTAHR).

There are three species of ʻopihi commonly observed on Hawaiian rocky shorelines. These species occupy different vertical zones of intertidal habitats and eat crustose coralline algae and microorganisms from rocks. For the study, growth increments were identified from a cross-section of opihi shells with corresponding oxygen isotope measurements used to examine environmental differences.

Erik Franklin, Associate Research Professor at SOEST’s Hawaiʻi Institute of Marine Biology, said the study represents a breakthrough for studying the population dynamics of ʻopihi in Hawaiʻi that can be used to better develop sustainable fishing approaches for the species.

“ʻOpihi are a culturally valuable marine resource in Hawaiʻi,” Franklin said. “Developing effective strategies to sustainably harvest these populations depends on accurate information about their life history traits such as age, growth, and longevity. Our understanding of ʻopihi biology just took a big step forward with the results of this study.”

Historically, ʻopihi were highly prized and served as a traditional delicacy within the Native Hawaiian subsistence diet. Today, the fishery operates with fishers collecting ʻopihi from rocky intertidal habitats around the main Hawaiian Islands and selling directly to local commercial vendors, but non-commercial fishers also collect for subsistence purposes and important cultural events. Over the past century, harvest amounts of ʻopihi have declined dramatically suggesting an opportunity to rebuild this fishery through further research and community-based management actions.

“Our results suggest that ʻopihi ʻālinalina are fast growers, reaching a size that corresponds to maturity within 8-9 months of settlement and can live to 5 years old,” said lead author and UH Mānoa’s Molecular Biosciences and Bioengineering Department doctoral student Anthony Mau. “That is critical information to better inform fishing practices for ʻopihi. We were only able to collect such high-resolution temporal data for aging the ʻopihi through a collaboration with the SOEST’s Hawaiʻi Institute of Geophysics and Planetology that provided access to cutting edge technology. We’re excited about these results which are just one aspect of an ongoing collaboration to learn more about the biology and ecology of ʻopihi and identify community-driven options for sustainable harvests.”

Mau said the research resulted in the first study on a tropical limpet species using the SIMS methodology which demonstrated the utility of the approach for other tropical intertidal molluscan species. The analyses used statistical methods to assess the relationship between oxygen isotopes in the shells and seawater temperatures. The growth, age, and longevity were determined from fitting a growth model to the back-calculated dates from the SIMS analysis and the observed shell increments.

The research team included Franklin, Mau, Kazu Nagashima and Gary Huss from the UH Mānoa’s Hawaiʻi Institute of Geophysics and Planetology, and Angelica Valdez, Philippe Nicodemus, and Jon-Paul Bingham of the UH Mānoa CTAHR. Valdez received funding from the Undergraduate Research Opportunities Program in spring 2019 to support the work mentored by Bingham.