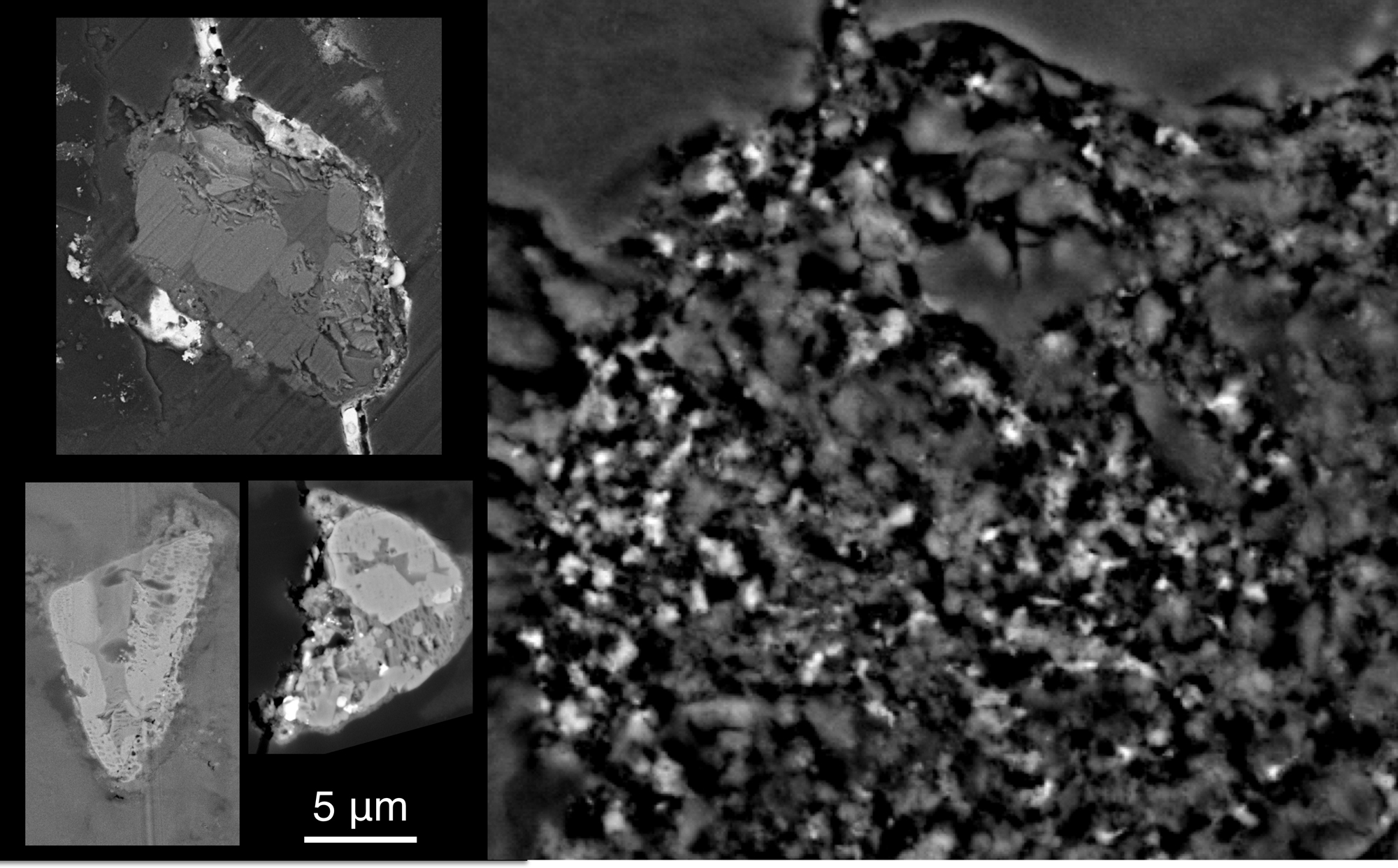 Three larger rocks, each containing several crystals, from comet Wild 2 are shown on the left of this image in cross-section, as imaged by an electron microscope. Fine-grained dust from the comet, still embedded in the aerogel it was captured in, shown at right. All images are at the same scale; 5 micrometer scale bar is shown. Credit: R. Ogliore (Univ. of Hawaii) and Z. Gainsforth (Univ. of California, Berkeley).

Our solar system, and other planetary systems, started as a disk of microscopic dust, gas, and ice around the young Sun. The amazing diversity of objects in the solar system today – the planets, moons, asteroids, and comets – was made from this primitive dust.

NASA’s Stardust mission returned to Earth with samples of comet Wild 2, a comet that originated outside the orbit of Neptune and was subsequently kicked closer to Earth’s orbit in 1974 when Jupiter’s gravity altered Wild 2’s orbit.

A team of scientists from University of Hawai‘i – Mānoa (UHM) and University of California – Berkeley, led by Ryan Ogliore, Assistant Researcher at UHM’s Hawai‘i Institute for Geophysics and Planetology (HIGP), investigated the oxygen isotope and mineral composition of the comet dust returned from Wild 2.

Before Stardust returned, scientists thought that everything it brought back from the comet would be either this primitive dust or circumstellar grains – rocks and minerals that formed around other stars. This was not the case.

In a study published recently in Geochimica et Cosmochimica Acta, Ogliore and his colleagues discovered that the larger-sized dust appears to be similar to rocks found in primitive meteorites called chondrites. The smaller-sized dust, on the other hand, displays the entire range of known oxygen isotopic compositions that have been measured for objects from the inner solar system (from the Sun to the asteroid belt).

This unexpected combination of material has deepened the mystery of Wild 2’s past.

“So, now we ask the question: Does the fine-grained dust from comet Wild 2 represent a diverse sampling of many inner-solar-system objects that were transported to the outer solar system, or in fact, the raw starting materials of the solar system?” said Ogliore.

Fortunately, the team has a method to address that. Processing of material in the inner solar system should alter the abundance of circumstellar grains and volatile elements in the fine-grained dust.

Reflecting on the complex life history of comet Wild 2’s constituent material, Ogliore said, “The comet’s nucleus today is made up of small rocks and ice, separated by fractions of an inch, that originally formed billions of miles apart. Some rocks have seen temperatures above 2500 degrees Fahrenheit, but adjacent ice has been kept close to absolute zero for billions of years. Every tiny grain we look at has its own fascinating story to tell.”