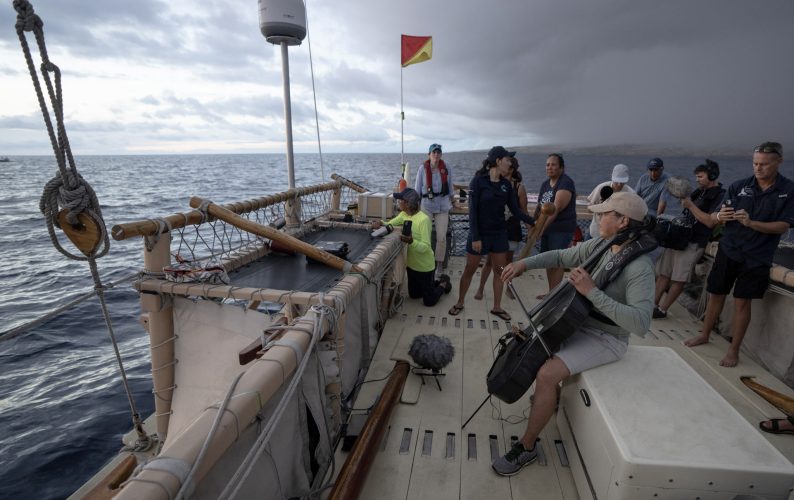 An unlikely collaboration of a world-renowned cellist aboard the most famous voyaging canoe brought music to the world including the ears of Native Hawaiian practitioners and University of Hawaiʻi at Mānoa Hawaiʻi Institute of Marine Biology (HIMB) researchers and students, and perhaps even the wildlife in December. The once in a lifetime trip in waters off of Hawaiʻi Island featured a memorable performance and discussion about the unique culture of whales in Hawaiʻi and connections between music and nature.

“Yo-Yo Ma’s team chose to work with HIMB because of our mutual interest and experience in making connections across art and science. We hope that these kinds of immersive cultural experiences can help foster our sense of stewardship of the Earth’s amazing resources, in Hawaiʻi and around the world,” said HIMB Director Eleanor Sterling.

UH’s Marine Mammal Research Program (MMRP) Director Lars Bejder and Faculty/Researcher Aude Pacini had the opportunity to sail onboard the Hōkūleʻa—together with approximately 20 other people—including Hōkūleʻa crew, Yo-Yo Ma and his team, and other respected Native Hawaiian practitioners. Late in the afternoon, the team departed from Kawaihae Harbor on Hawaiʻi Island’s Kohala coast and they returned after sunset.

“We discussed how humans impact the world’s oceans and how we can raise awareness about the plight of the health of the oceans through music and whales—both of which allow us to draw in many people to convey important messages about how we need to protect the oceans,” said Bejder.

Bejder and Pacini were aboard Hōkūleʻa while UH graduate student Liah McPherson and MMRP volunteer Kyleigh Fertitta joined on one of the support vessels to deploy a drone (which due to delays and weather did not happen).

“In assisting as a marine mammal acoustic expert, one of my responsibilities was to record the underwater sounds and music as well as to discuss the impact of human activities on marine life in particular, and underwater noise on marine mammals,” said Pacini.

Once the team reached their destination, the first song Yo-Yo Ma performed was “Somewhere Over the Rainbow.” Pacini had a hydrophone in the water and recorded the sounds of his song that propagated from the hull of the Hōkūleʻa into the ocean. As Yo-Yo Ma was playing the song, people saw a koholā breach in the background as he was playing.

Before the team headed back toward the harbor, Yo-Yo Ma, Pacini and Bejder discussed koholā, biology, acoustics, culture and art.

“As we started to head back towards Kawaihae harbor—with the red glow of lava from the Mauna Loa volcano eruption—we all sat in peace and reflected on the couple of hours that just had passed in the company of Native Hawaiian practitioners, Yo-Yo Ma, whales, the amazing crew aboard the historic Hōkūleʻa,” said Bejder.

This trip was supported by Hōkūleʻa’s Nainoa Thompson, Sonja Swenson and Lehua Kamalu, and the entire crew present that day; Mike Nakachi, who provided logistical and vessel support; the Hawaii Symphony Orchestra; and Dolphin Quest, who provided support for UH researchers and students.