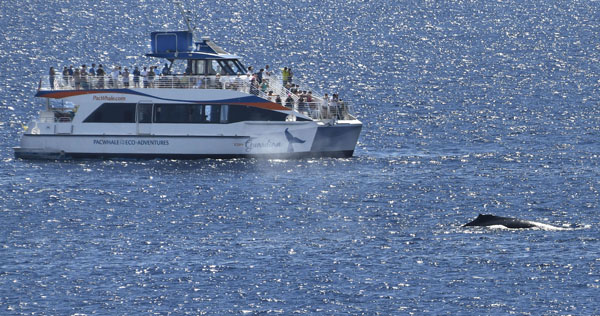 A whale watching boat shadows a humpback mother and her calf Tuesday. Image courtesy of The Maui News / Mattew Thayer.

To understand “what’s going on” with declines in observed humpback whale sightings as they migrate between Hawai‘i and Alaska, a band of researchers is taking a deeper dive into the overall health and energy levels of the whales and comparing data between pre- and post-heatwave behaviors.

After the Great Whale Count showed a 64.5 percent decline in humpbacks during the 2015–16 season, three researchers partnered to study whale body condition, as well as their feeding and breeding patterns from year to year.

Bejder said researchers are able to quantify energy levels and health by using noninvasive suction cup tags and unmanned aircraft systems or drones and through fieldwork. Starting in 2018, the devices have collected data on speed; depth; movement; and body condition, including skin, size, length and mass; as well as feeding rates in Alaska and birth rates in Hawai‘i. Using the same methods, Bejder said scientists also are studying why Australia has experienced an 8 to 10 percent increase in whale populations.

“If we have measurements now, then we’ll be able to compare them to other populations” and explore links between large-scale heatwave events, he said. Bejder’s focus is on the bioenergetic model — how cells transform into energy — in males, calves and mothers to understand “how much it costs” to migrate.

“The bigger, stronger, healthier you are, the more likely you are to reproduce,” he said. “So if you’re able to quantify the health of an organism based on body size, you can say something about its population.”

Read more about it in The Maui News.