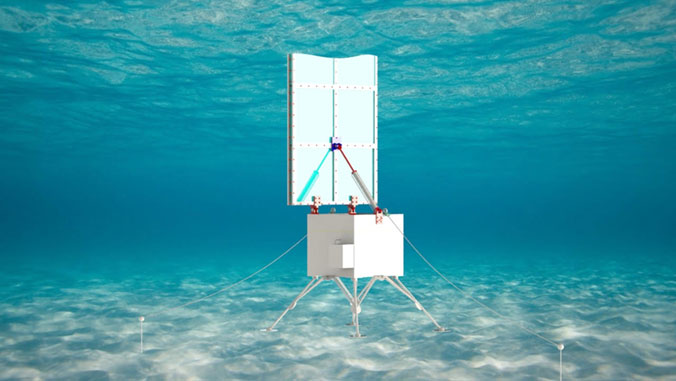 Wave energy has the potential to contribute to Hawaiʻi’s renewable energy in the future. The technology is in the early stages of development and the only grid-connected wave energy test site in the country is located in Hawaiʻi. This has led to a growing level of expertise and funded projects in wave energy at the School of Ocean and Earth Science and Technology (SOEST).

A University of Hawaiʻi at Mānoa team is participating in the U.S. Department of Energy (DOE) Waves to Water competition, which challenges teams to develop concepts using wave energy to drive small-scale desalination systems for use in disaster response scenarios, or in remote situations near coastlines where freshwater is not readily available.

The team is called Nalu e Wai, which means waves into fresh water. Team members include Patrick Cross, a research specialist at SOEST’s Hawaiʻi Natural Energy Institute (HNEI), Krishnakumar Rajagopalan, an assistant researcher at HNEI, Nicholas Ulm, a PhD student at the Department of Ocean and Resources Engineering, a PhD student at Uppsala University in Sweden, and a group from the Indian Institute of Technology Madras (IIT Madras).

“Applying wave energy to the problem of desalination is new to us, but we have gained critical insights through this competition,” said Cross. “This application could be useful in Hawaiʻi as well, in situations where freshwater may become more and more scarce. It could also represent an economic opportunity in the future if Hawaiʻi can get involved in producing such systems for other parts of the world.”

In the competition, the entire desalination system has tight restrictions on weight and size, requiring it to fit inside a roughly 1m-cubed container. This ensures that the system can be shipped and rapidly deployed to a location. Nalu e Wai team’s approach has been to utilize what is called an oscillating wave surge converter—essentially a flap that moves back and forth in the waves near shore—to pump water through a reverse osmosis (RO) system.

The device rests on legs on the seabed in shallow water, outside the wave break. The pumping action driven by the waves pulls seawater into the device, through filters and then into the RO portion, producing fresh water below a required level of total dissolved solids specified by the prize rules. Freshwater then exits the system and is pushed through tubing to a container on shore.

“We had gotten to know Professor Abdus Samad at IIT Madras through a recent fellowship visit to UH in May 2019. Given the critical shortages of fresh water that plague his home city of Chennai, India, it was a natural fit to work with the team from IIT,” said Cross. “They are making critically important contributions to our design evolution, including leading on the RO system itself.”

The competition consists of five stages: concept, design, adapt, create and drink. The team submitted entries to the concept and design stages and were winners in both stages, earning prize money to advance into the adapt stage of the competition.

Currently, Nalu e Wai is adapting its earlier design to a location where it was given information on the wave and weather conditions, physical and environmental characteristics and limitations. The team will be required to pump fresh water up onto a pier, which is considerably high above the water. The team is nearing completion of this design adaptation, and must submit its entry by November 30, 2020.

“If successful, we would then proceed to the create stage, using funds from our winnings, where we would build our prototype and test it in a wave tank at IIT Madras,” said Cross.