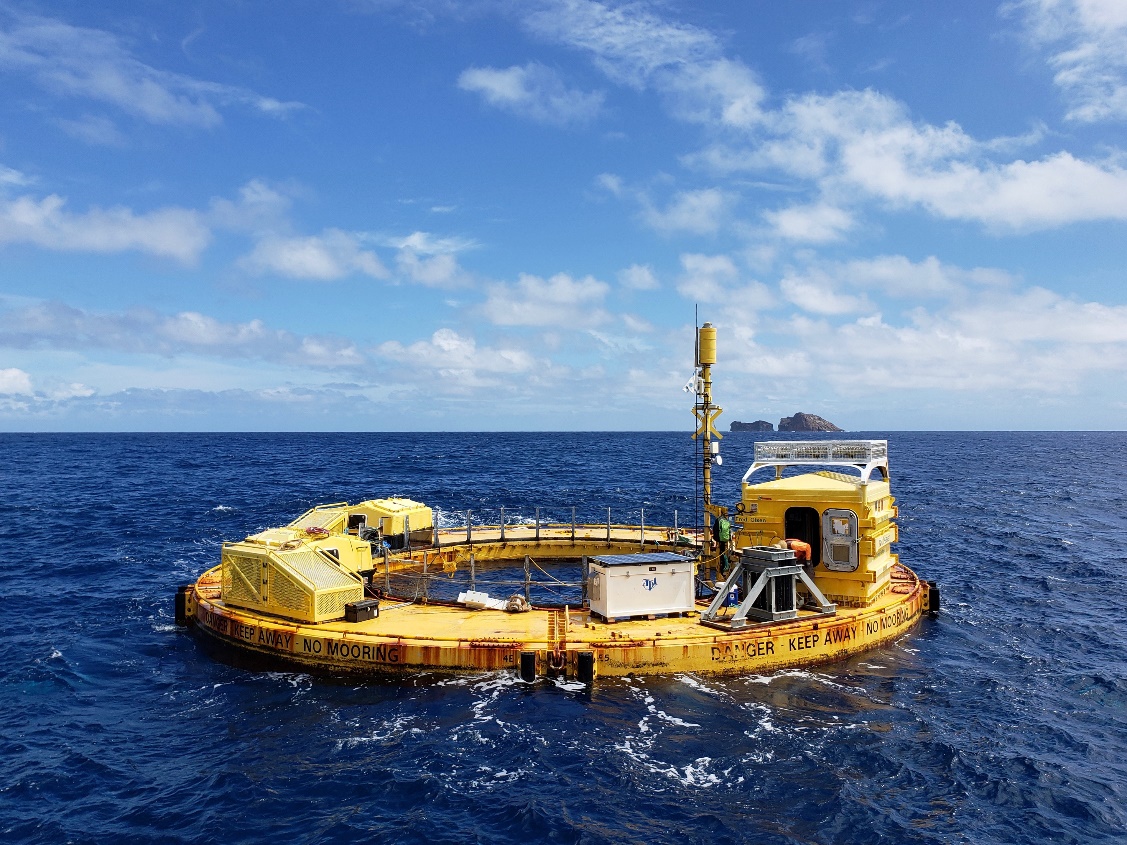 The Fred. Olsen Lifesaver wave energy converter (WEC), as deployed at WETS during 2018/2019, with the University of Washington Adaptable Monitoring Package onboard and receiving its power from the WEC itself. Photo courtesy of Pat Cross.

A new infusion of $6 million from the Naval Facilities Engineering and Expeditionary Warfare Center will allow the Hawaiʻi Natural Energy Institute (HNEI) at the University of Hawai‘i at Mānoa (UH), to continue to provide critical research and logistical support to the Navy’s Wave Energy Test Site (WETS), off Marine Corps Base Hawai‘i.  WETS is the only grid-connected test site in the U.S. and thus provides a unique proving ground for pre-commercial wave energy converters (WECs) to demonstrate performance in an operational setting and advance their technology readiness level.

“We are excited by the Navy’s latest investment in our work to advance wave energy through our support of WETS, particularly as it allows us to expand our research into new areas of relevance to offshore applications, such as autonomous vehicle recharge for ocean observing purposes,” said Pat Cross, Research Specialist in Marine Energy at HNEI and Principal Investigator for the WETS support program.

These funds, directed to the Applied Research Laboratory at UH, working with HNEI, will allow the university to support a number of WEC deployments planned in the 2021 to 2024 timeframe in the form of environmental monitoring, power and survivability performance assessment, and additional logistics support to the Navy and to WEC developer companies.

Marine energy has immense potential to supply persistent power to ocean observing and monitoring, desalination, aquaculture, at-sea mineral scavenging, and electrification of remote or island communities. In addition to core support to WETS, the new funds will support an expansion of UH research related to offshore, non-grid-connected applications of wave energy.

HNEI will examine the potential for existing WETS infrastructure to support the creation of an offshore test and demonstration node, including subsea power storage as well as communications and power interfaces that would allow smaller-scale WECs to recharge autonomous undersea vehicles (AUVs) and various environmental sensing systems. The team will also design an AUV docking and charging station for use at WETS.

The new funding further supports HNEI and UH researchers to advance a number of research projects such as a power generation and management system for a floating Oscillating Water Column WEC, designed for applications such as ocean observation, navigation, and equipment recharge.  A novel breakwater system will also be advanced with an integrated WEC that will generate power from wave energy while protecting coastal regions. Additionally, the team will develop a small-scale WEC that can be rapidly deployed for both power generation and seawater desalination close to shore.

Hawaii’s progress in making the transition to renewable energy for electric power is well-served by development of wave energy, given the availability of that resource in the state and its potential to augment and complement other forms of variable renewable energy – specifically wind and solar. Wave energy is relatively consistent throughout the day and night, and can be forecast with good accuracy out to a week or more, enhancing grid managers’ ability to plan for its contribution to the overall generation mix on the grid.

Further, Hawaii’s wave resources are ideal for testing, particularly on Oahu’s windward side where WETS is located. Year-round trade winds, augmented by winter storm conditions and long-period swells from the north, provide a unique environment in which to test both long-term power productivity and device survivability. The new funding will take advantage of this ideal test bed to allow companies to continue their progress toward cost-competitive grid-connected wave energy, while also expanding research into non-grid-connected applications of wave energy, which may be both more achievable in the near term and useful in terms of advancing concepts of relevance to grid-connected wave energy.

“This is an exciting time for the EXWC Marine Energy Development program”, added Nate Sinclair, WETS Program Manager, Naval Facilities Engineering and Expeditionary Warfare Center.  “Along with continuing to provide in-situ testing infrastructure and support for wave energy power to shore, we’re now making substantial investments for pursuing technology development that will lead to providing power in remote locations for Navy applications such as persistent surveillance and AUV recharging.”

UH will partner with research colleagues at the University of Washington and Oregon State University to advance many such concepts under these new funds.