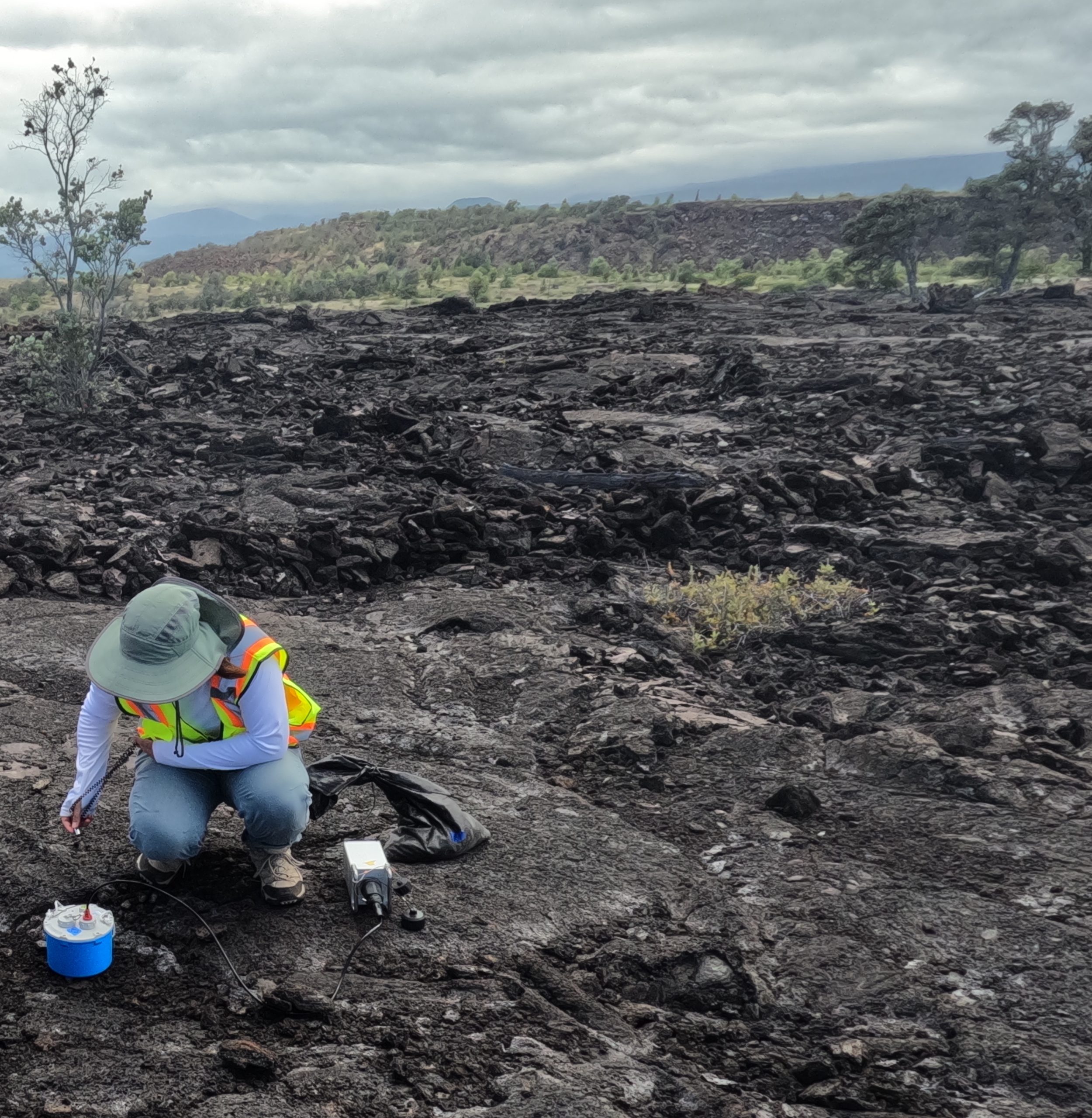 Earth scientists from the University of Hawai‘i (UH) at Mānoa and the U.S. Geological Survey’s Hawaiian Volcano Observatory (HVO) recently deployed instruments called seismic nodes across the Pāhala region on Hawai‘i Island. These light, compact seismometers will help researchers understand why the number of earthquakes in the region has increased 70-fold since 2015.

Deep beneath Pāhala, a town located in the southern part of the Island of Hawai’i, is currently the most seismically active region of the Hawaiian Islands. Frequent, deep earthquakes (greater than 12 miles below sea level) are felt regularly by local residents, and, occasionally, people across the entire island. However, the current level of activity was not always common to the region and researchers are trying to understand more about why it is happening.

Since mid-2019, there have been several hundred earthquakes on average each week. And since August 2020, larger-magnitude earthquakes have also begun to occur deep beneath Pāhala. Eight magnitude-4.2-to-4.6 earthquakes, at depths of 19–21 miles have been recorded.

Helen Janiszewski, assistant professor of earth sciences at the UH Mānoa School of Ocean and Earth Science and Technology (SOEST), SOEST earth sciences graduate student Jade Wight, and researchers from HVO, deployed 86 seismic nodes earlier this month to measure ground shaking at the location where they are placed.

“We are grateful to our collaborators at HVO, our field team, and local landowners and community members for a successful field campaign to deploy the seismic nodes,” said Janiszewski. “We are looking forward to their recovery in a few months, in order to better understand the underlying causes of the ongoing Pāhala earthquake swarm.”

Previous geophysical studies have theorized that deep earthquake activity beneath the Pāhala region may be related to hot spot magma transport and/or faulting in the brittle upper mantle beneath the island. Interestingly, the area of elevated seismicity is almost equidistant from the summits of the three most active volcanoes in Hawaiʻi: Kīlauea, Mauna Loa, and Kamaʻehuakanaloa (Lō‘ihi Seamount).

Whether this region has a possible connection to the shallower magma storage and transport systems of Kīlauea or Mauna Loa is unclear, but there are no obvious indicators of magma transport from this region to the surface. Previous studies relied on data collected from HVO’s widely-spaced permanent seismometers in the region, which are not configured to study this area in detail.

Unlike permanent seismic stations, which are placed farther apart and cover the entire Island of Hawai’i, the temporary seismic nodes will be tightly grouped in order to more densely record earthquake signals across the region surrounding Pāhala. For two months, these nodes will record ground shaking generated by shallow and deep earthquakes occurring across the Island of Hawai’i as well as distant earthquakes from around the world.

The densely-spaced nodal instruments recording earthquakes over a wide range of depths and locations during this experiment will collect seismic data from below the Pāhala region at unprecedented resolution. Seismologists at HVO and UH Mānoa will analyze data collected from these seismic nodes to create images of the structure of the Earth beneath Pāhala from as great as 25–31 miles below sea level all the way to the surface.

The data and images will be used to precisely locate the earthquakes in this region and, hopefully, identify or constrain the locations and distributions of shallow and deep fault zones and potential magma pathways within the region. Together, the results will help us to understand what is causing the frequent earthquake activity deep in the region beneath Pāhala.

Portions of this content provided by the U.S. Geological Survey HVO.