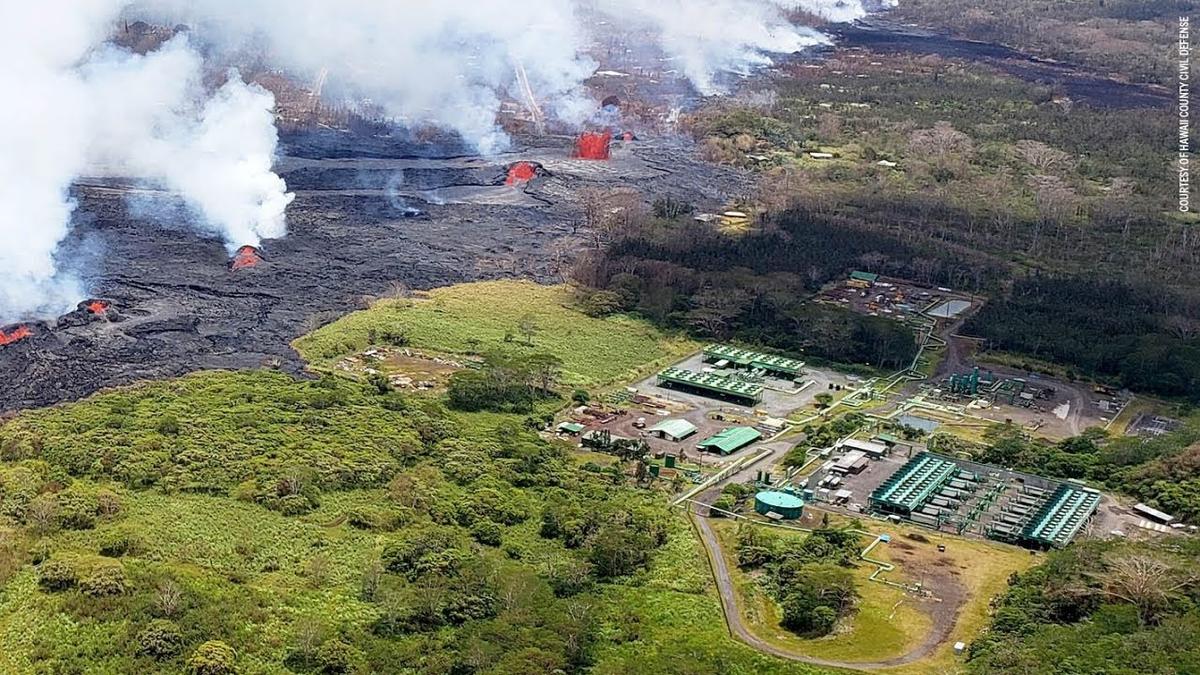 Puna Geothermal Venture, Hawaii's only geothermal power plant has been closed since a lava flow from the 2018 Kilauea eruption threatened the facility. The operator plans to reopen the plant, which provided 25 percent of Hawaii Island's power prior to closure. Credit: Hawaii County Civil Defense.

Research recently presented by graduate student Ted Brennis with the Hawaii Groundwater and Geothermal Resources Center indicates that where resources are available, geothermal power is competitive with wind and solar on both cost and land use. He talked with Hawaii Public Radio this week about the potential for geothermal power to help Hawaii achieve its 100 percent renewable electricity goal.

Currently, geothermal is not generating any electricity in Hawaii. Puna Geothermal Venture, the state’s only geothermal power plant, closed in 2018 after a near miss with a lava flow from nearby Kilauea Volcano.

Prior to its closing, PGV supplied 25 percent of Hawaii Island’s electricity demand. The plant’s operator says it plans to reopen by the end of 2019.

Geothermal energy has only modest representation in for Hawaii’s energy portfolio. In 2018, prior to PGV’s closure, it supplied less than 4 percent of Hawaii’s total electricity production. Plans for the future include a modest increase in geothermal, but solar remains the dominant source.

But researchers at the University of Hawaii point out that most of the state has not been explored for geothermal potential, a process not unlike surveying for oil deposits.

Brennis told HPR that Puna Geothermal Venture produces around 1 megawatt of power per acre of land it occupies, far more efficient than its renewable competitors.

However, there are drawbacks. Surveying for geothermal resources can be costly and time consuming, with no guarantee suitable conditions will be found. Generating power from naturally hot water requires invasive drilling, and sometimes the use of hazardous chemicals.

But Brennis cautions that “no renewable resource is perfect.” He points out that solar panels require the industrial scale mining of quartz, often sourced from open pit mines, and the use of hazardous industrial chemicals in the manufacturing process. Each 2 megawatt wind turbine needs around 700 tons of concrete, a major source of carbon emissions.

So can geothermal be a viable competitor to solar and wind father away from the active Kilauea Volcano? Brennis says that scientists believe the rest of Hawaii Island and Maui have strong potential for geothermal, but no one is really sure.

“That’s the key. We need to better characterize the potential across the rest of the state so we can plan effectively.”

Read more and listen to the interview at HPR.