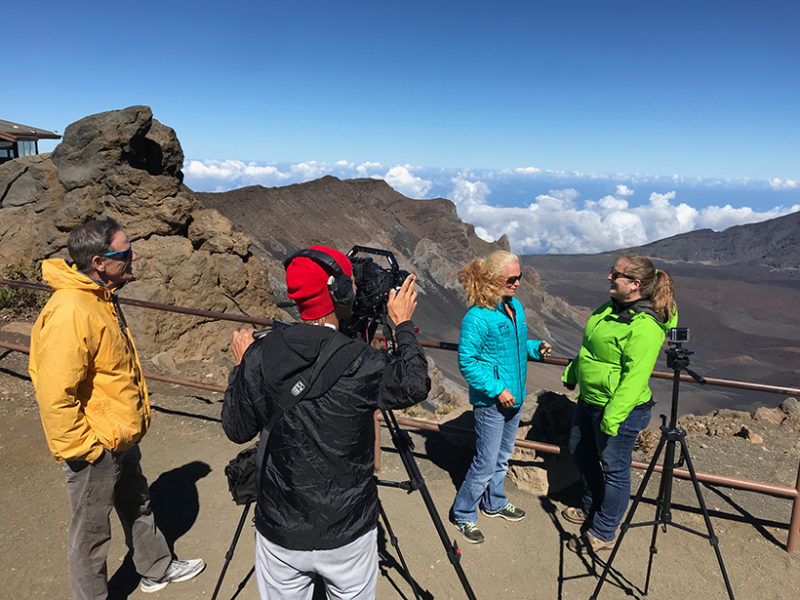 The Voice of the Sea crew films the episode “Climate from the Mountains to the Past” on watershed science in the cloud forest at Haleakalā National Park, Maui, Hawaii. Credit: Darren T. Lerner

The award-winning, locally-produced television series Voice of the Sea, reaches broad, diverse audiences, and scientists are helping to tell their own stories and speak to the communities in which they live. Below is an excerpt from an EOS article by Kanesa Duncan Seraphin, Director of the Center for Marine Science Education at Hawai‘i Sea Grant.

“The importance of communicating science to the public is being increasingly recognized in light of ongoing climate change, the COVID-19 pandemic, and many other issues affecting everyday people. However, most current outreach endeavors—science days, open houses, podcasting, and the like—skew heavily toward middle- and upper-class audiences.

Even the Internet is not universal. As of April 2020, 59% of people around the world actively use the Internet [Statista, 2020]. This figure is higher in the United States, but 27% of Americans still lack high-speed Internet access, and access is not uniform across demographics. Forty-four percent of U.S. households earning less than $30,000 per year lack high-speed Internet compared with just 8% of households making more than $75,000 per year. The disparities are similar among groups of different educational levels and are more pronounced among various ethnic groups, in Black and Hispanic communities, and in rural areas [Pew Research Center, 2019].

To promote diversity, equity, and inclusion in the geosciences, researchers as well as science communicators need to engage in expanding public perceptions of who does research and how research is conducted, provide connections to local role models for people interested in geoscience careers, and pursue outreach geared toward underrepresented segments of the population. Voice of the Sea, a series of half-hour television episodes now in its seventh year, is attempting to do just that, using a tried-and-true medium that continues to attract large audiences over a broad demographic spectrum.”

Read the full article on EOS.