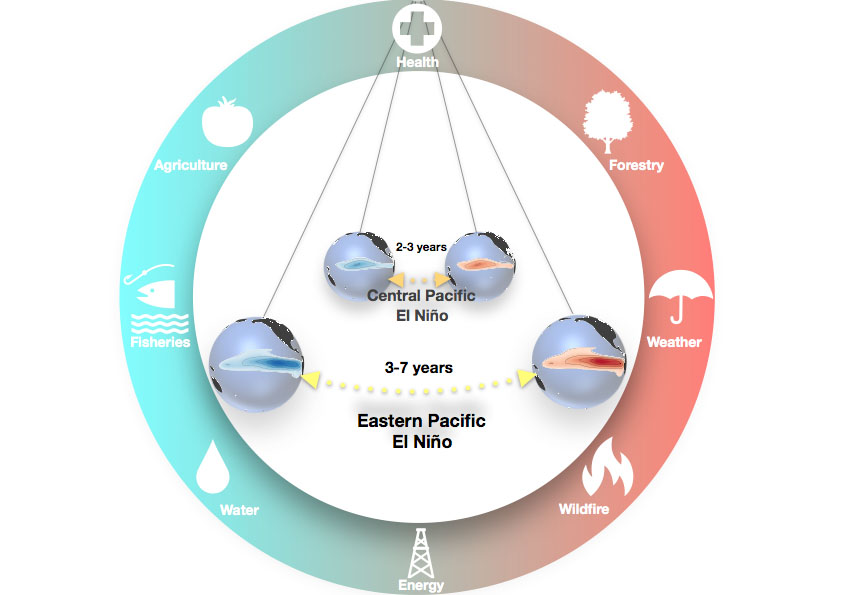 Schematic illustration of the two atmosphere/ocean oscillations that contribute to the complexity of the El Niño-Southern Oscillation and its impacts on various sectors of society. Identified by computer models, these oscillations with periods of 2-3 and 3-7 years are associated with central and eastern equatorial Pacific warming, respectively. Credit: Timmermann, et al. (2018).

A new research study, published this week by an international team of climate scientists in the journal Nature, isolates key mechanisms that cause El Niño to differ from one event to the next. The team, including several researchers from University of Hawai‘i at Mānoa (UH Mānoa) School of Ocean and Earth Science and Technology (SOEST), found that the complexity and irregular occurrence of El Niño and La Niña events can be traced back to the co-existence of two coupled atmosphere-ocean oscillations, with different spatial characteristics and different frequencies.

“Our study reveals that there is a hidden structure in the seemingly chaotic and unpredictable occurrence of El Niño events,” said Axel Timmermann, lead author of the study, director of the IBS Center for Climate Physics (ICCP) at Pusan National University and former professor at SOEST.

El Niño events are characterized by an unusual warming of the central to eastern equatorial Pacific, which can last up to one year. On average El Niño events lead to a drying of Southeastern Asia and the Western tropical Pacific while enhancing rainfall near the eastern Pacific shores, in countries such as Ecuador and Peru. El Niño’s “ripple effects” can not only be found in the atmosphere, but also in ocean currents, ecosystems, the occurrence of natural disasters, global markets and national economies.

Climate scientists have long recognized that not every El Niño is alike. Some are weak, others are strong. Some occur in the central Pacific, others in the east. These differences will determine which areas will be hit hardest by climatic extremes and which ones will be spared. Predicting El Niño events accurately requires a deeper understanding of its diversity or as some scientists call it—its “flavors”.

To elucidate the origin of El Niño diversity, a group of 40 climate scientists from 11 countries teamed up to search for the hidden “blueprint.” Using a computer simulation of El Niño events, the team ran numerous scenarios with small tweaks to the temperature, wind and ocean conditions.

They found that Eastern Pacific El Niño events are characterized by a return time of 3-7 years, whereas Central Pacific events tend to recur on average every 2-3 years. The different character of these modes is determined by how strongly atmosphere and ocean interact with each other. In the observations however, the co-existing Eastern and Central Pacific warm-cold swings are far from periodic. The tropical Pacific climate systems requires additional excitation, either through random weather events or through atmospheric circulation changes induced by temperature changes in the Indian and Atlantic Oceans. These interactions are an important source for El Niño irregularity, and limit how far ahead Tropical Pacific climate anomalies can be predicted.

“Finally we can attribute the observed complexity of the most powerful natural climate engine to the co-existence of two oscillatory states of the underlying mathematical equations” said Fei-Fei Jin, professor of Atmospheric Sciences at UH Mānoa SOEST, who led the development of the new mathematical framework for El Niño complexity presented in the study.

This new understanding will help researchers determine whether to expect shifts of El Nino characteristics as the global climate changes.