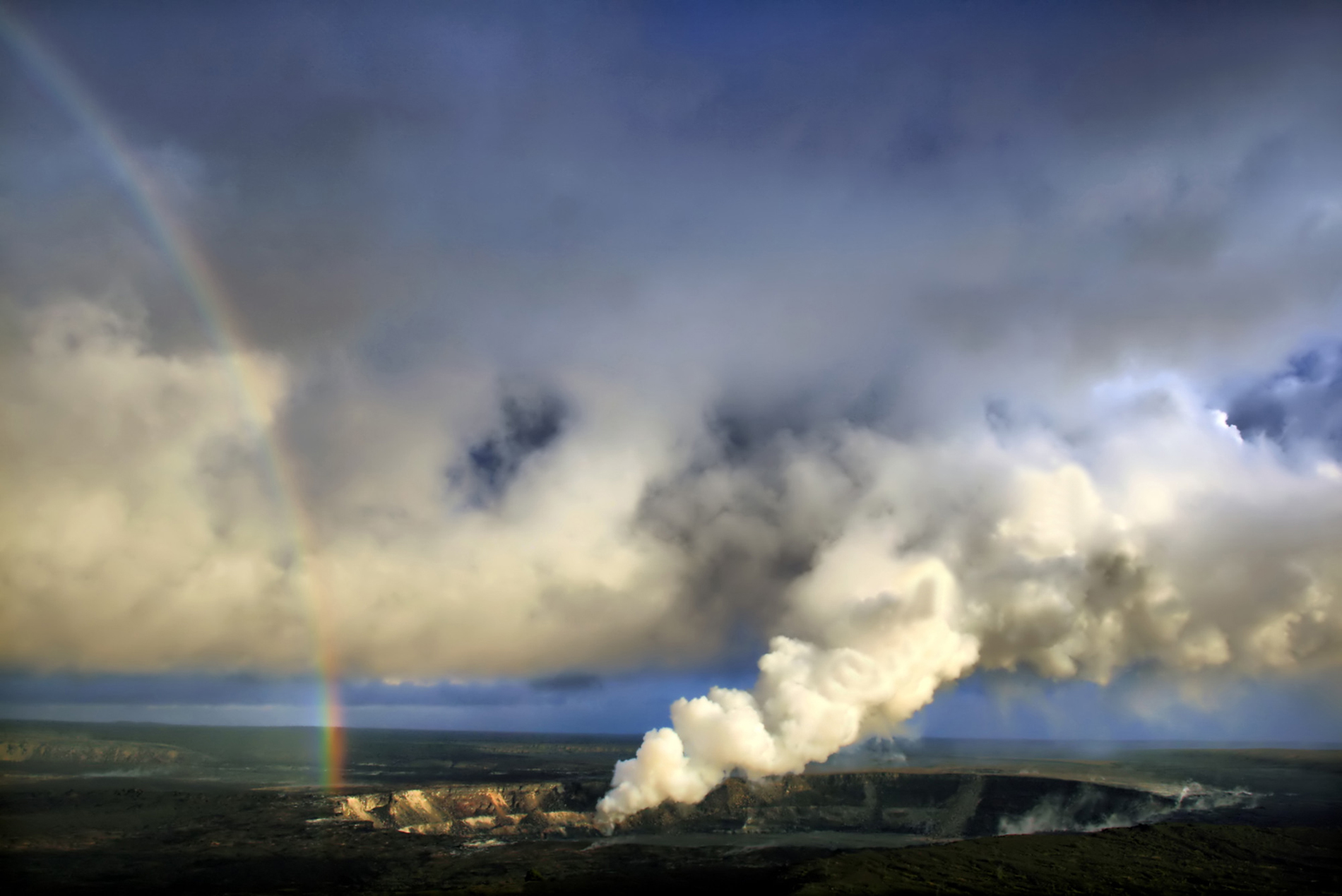 Rainbow and volcanic ash with sulfur dioxide emissions from Halema'uma'u vent at Kilauea volcano on the Big Island of Hawai'i. Photo courtesy of Mila Zinkova via Wikimedia Commons

El Niño events––major warmings of the tropical Pacific Ocean occurring every two to seven years—have significant environmental and societal impacts in North and South America and other parts of the world. Previous research has shown volcanic eruptions affect El Niño–Southern Oscillation (ENSO) cycles but the mechanisms of that connection have not been clear. A new study published in Science Advances and co-authored by SOEST atmospheric scientist Christina Karamperidou suggests a new explanation for how this response might happen.

Volcanoes inject vast amounts of small particles, aerosols, high into the atmosphere. These particles act like a mirror in the sky, reflecting sunlight back into space and causing a cooling that lasts between one and two years—thus linking volcanic eruptions to the climate system.

In a computer simulation, the researchers tested the effects of a volcanic eruption occurring in the tropics but far from the equator, either in the Northern or the Southern Hemisphere. The simulated eruption was the size of the 1815 event at Mount Tambora, when a volcanic mountain on the northern coast of Sumbawa island, Indonesia, exploded in the largest volcanic eruption in recorded history.

Conventional theories have focused on the local, equatorial effects of the volcanic cooling. Contrary to this, the recent study found that the cooling occurred mostly in the region outside the tropics. This distant cooling leads to a shift in winds along the equator favoring the onset of El Niño conditions when the eruption occurs in the tropics and north of the equator and La Niña conditions when the eruption occurs south of the equator.

“We showed in this study that whether explosive volcanic eruptions lead to El Niño or La Niña conditions depends not only on the hemisphere of the eruption and the state of the tropical Pacific at the time of the eruption, but also on the large-scale climate conditions outside of the tropics,” said Karamperidou, Atmospheric Sciences associate professor.

“In fact, in a previous study, we showed that high-latitude volcanic eruptions in the Northern Hemisphere, for example in Iceland, can also lead to El Nino conditions in the tropics,” she said. “Both of these studies highlight the role of the extratropical atmosphere in influencing the development of El Nino events, and ultimately help us to better forecast its behavior and its impacts in response to not only volcanic eruptions but also other aerosol emissions inside and outside of the tropics.”

Understanding this process provides insight about the response to human-made emissions such as CO2 and aerosols. In this way, volcanoes are natural experiments that can help scientists better understand climate change caused by human activities.

The study, published recently in the journal Science Advances, was led by Francesco S. R. Pausata, formerly with the Bolin Centre for Climate Research and now at the University of Quebec in Montreal.

Portions of this content courtesy of Bolin Centre for Climate Research.