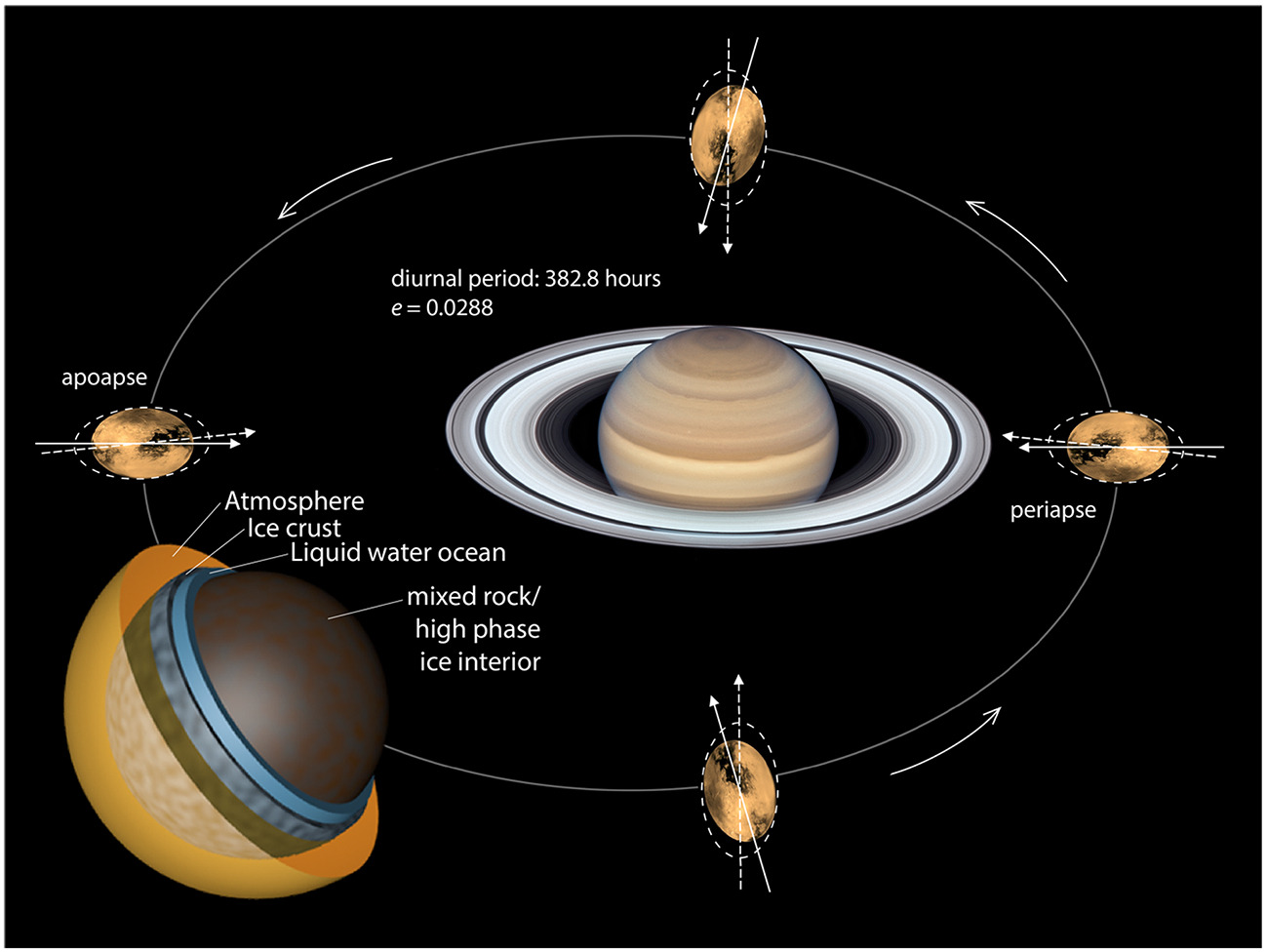 Strike-slip faulting, the type of motion common to California’s well-known San Andreas Fault, was reported recently to possibly occur on Titan, Saturn’s largest moon. New research, led by planetary scientists from the University of Hawai‘i at Mānoa School of Ocean and Earth Science and Technology (SOEST), suggests this tectonic motion may be active on Titan, deforming the icy surface.

On multiple ocean worlds, for example Jupiter’s Europa and Saturn’s Enceladus, expressions of strike-slip faulting are well documented. Researchers believe the motion along these faults is driven by variations in diurnal tidal stresses—the push and pull caused by the relative motion of a moon and its planet.

Titan has a thick crust made of rock-hard water ice. And Titan is the only place besides Earth known to have liquids in the form of lakes and seas on its surface. However, Titan’s liquids are hydrocarbons, such as methane and ethane.

With limited observational data available, Liliane Burkhard, doctoral candidate and graduate student researcher in the Department of Earth Sciences at SOEST, and co-authors examined the possibility for strike-slip tectonics using physics-based faulting models. The model calculations take into account the tidal stress on Titan, the orientations of candidate faults, crustal properties (including pore fluid pressure), and the stress needed to cause the surface material to fail or crack.

“Titan is unique because it is the only known satellite to have stable liquids on the surface,” said Burkhard. “We, therefore, were able to make an argument for integrating pore fluid pressures in our calculations, which can reduce the shear strength of the icy crust and may play a key role in the tectonic evolution of Titan.”

In this novel study, the scientists found that a combination of diurnal tidal stresses and pore fluid pressures promotes shear failure for shallow faults on Titan. Further, faults near the equator that strike near east-west are optimally oriented for potential failure.

“This is an exciting revelation,” said Burkhard. “Our results suggest that under these conditions, shear failure is not only possible, but may be an active deformation mechanism on the surface and in the subsurface of Titan, and could potentially serve as a pathway for subsurface liquids to rise to the surface. This can potentially facilitate material transport that could affect habitability.”

Looking ahead to future missions

In the future, Burkhard hopes to conduct more research on the deformation of not only Titan but also other icy moons to uncover their tectonic history and astrobiological implications. Several remote sensing missions are scheduled to launch within the next few years to investigate Ganymede (ESA JUICE, 2022), Europa (NASA Clipper, 2024), and Titan (NASA Dragonfly, 2027).

“Combining new observations with our modeling techniques will strengthen our understanding of the icy crust and pinpoint the best location for exploration with a future lander mission and possibly access to the interior ocean,” she added.

Burkhard presented portions of this work virtually at the Europlanet Science Congress last month and was selected as one of three winners at a conference of approximately 800 participants from nearly 50 countries.

As part of a UH team, Burkhard was selected as a finalist—out of 1400 submissions worldwide—for Phase 1 of the OpenCV Artificial Intelligence (AI) Microsoft/Intel 2021 competition this Spring. While their project is aimed at quantifying the plastic pollution in Hawai‘i using AI cameras attached to drones, Burkhard said she hopes to take this type of AI research further and into the development of small autonomous companion probes for deep-sea vehicles that might someday explore the oceans of icy moons.