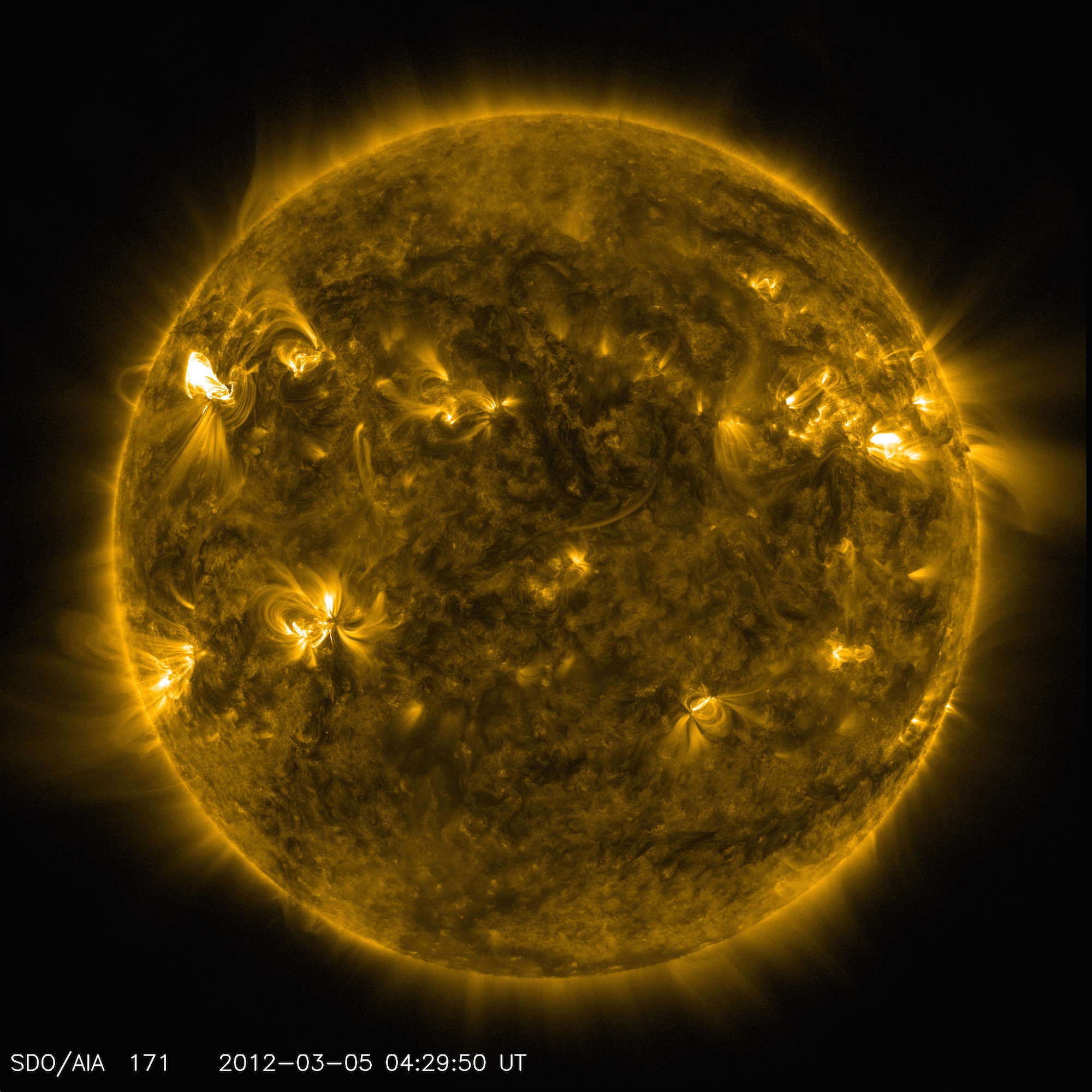 An image of active regions on the Sun from NASA’s Solar Dynamics Observatory. The glowing hot gas traces out the twists and loops of the Sun’s magnetic field lines. Image credit: NASA/SDO/AIA

A new study led by the University of Hawai‘i (UH) at Mānoa has helped refine understanding of the amount of hydrogen, helium and other elements present in violent outbursts from the Sun, and other types of solar “wind,” a stream of ionized atoms ejected from the Sun.

Coronal mass ejections (CME) are giant plasma bursts that erupt from the sun, heading out into the solar system at speeds as fast as 2 million miles per hour. Like the sun itself, the majority of a CME’s atoms are hydrogen. When these particles interact with Earth’s atmosphere, they lead to the brilliant multicolored lights of the Aurora Borealis. They also have the potential to knock out communications, bringing modern civilization to a standstill.

And their cause is pretty much a mystery.

Most of our understanding of the composition of the sun, which makes up 99.8% of the mass of the Solar System, has come from astronomical observations and measurements of a rare type of meteorite. In 2001, the Genesis probe headed to space to gather samples of solar wind in pure materials, and bring the material back to Earth to be studied in a lab. Those samples represented particles gathered from different sources of solar wind, including those thrown off by CMEs.

The Genesis samples allowed for a more accurate assessment of the hydrogen abundance in CMEs and other components of the solar wind. About 91% of the Sun’s atoms are hydrogen, so everything that happens in the solar wind plasma is influenced by hydrogen.

However, measuring hydrogen in the Genesis samples proved to be a challenge. An important component of the recent work was to develop appropriate standards using terrestrial minerals with known amounts of hydrogen, implanted with hydrogen by a laboratory accelerator.

A precise determination of the amount of hydrogen in the solar wind allowed researchers to discern small differences in the amount of neon and helium relative to hydrogen ejected by these massive solar ejections. Helium and neon, both noble gases, are difficult to ionize. The new measurements of hydrogen showed that helium and neon were both enriched in coronal mass ejections, providing clues to the underlying physics in the Sun that causes the coronal mass ejections.

In the very energetic event, “the ejected material appears to be enriched almost systematically in atoms that require the most energy to ionize,” said Ryan Ogliore, co-author and assistant professor of physics at Washington University in St. Louis. “That tells us a lot about the physics involved in the first stages of the explosion on the Sun.”

This finding brings researchers one step closer to understanding the origins of these particular solar events.

Portions of this content courtesy of Washington University – St. Louis.