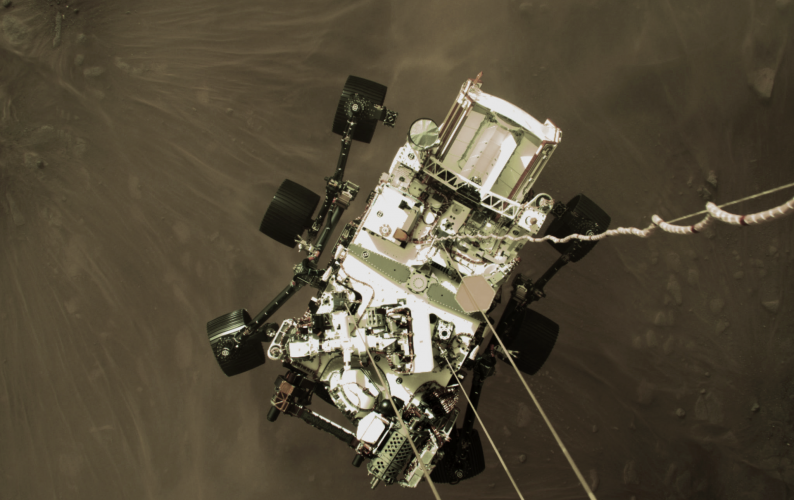 This is a high-resolution still image, part of a video taken by several cameras as NASA’s Perseverance rover touched down on Mars. A camera aboard the descent stage captured this shot. Credit: NASA/JPL-Caltech.

SOEST scientists watched live via NASA TV as Perseverance, the most sophisticated rover NASA has ever sent to Mars, successfully landed on the red planet.

Following six years of design, testing and development, UH Mānoa scientists and graduate students who are members of NASA’s instrument teams, will now begin the next chapter in the search for signs of ancient life on Mars.

“There is a collective sigh of relief today after Perseverance made a successful journey and landing,” said Shiv Sharma, a researcher at SOEST’s Hawaiʻi Institute of Geophysics and Planetology (HIGP) and member of the SuperCam instrument team. “Now the work begins to find signs of ancient life in the Jezero Crater.”

Perseverance is loaded with scientific instruments the teams will use to search for signs of ancient microbial life, characterize the planet’s geology and climate, and collect carefully selected rock and sediment samples for possible return to Earth.

The rover’s landing site, Jezero Crater, once contained a lake that scientists think is one of the most ideal places to find evidence of ancient life.

Sarah Fagents, HIGP researcher and volcanologist with the Mastcam-Z camera team, will distinguish volcanic rocks from sedimentary deposits, determine what the rock features indicate about the history of Martian volcanic eruptions and assist in determining outcrops that deserve a closer look with the other instruments.

For at least the first 90 Martian days, Fagents will have a demanding schedule—operating on “Mars time”—as the rover roams the harsh landscape.

“The Martian day is approximately 40 minutes longer than our Earth day, so to stay in sync with the rover, our operations shifts have to move later by about 40 minutes each day,” said Fagents. “Pretty soon we will be working through the night. Though the schedule will be tough, it’s thrilling to finally be on the ground and I wouldn’t want to miss a minute of this.”

The SuperCam team will assist with detection of biosignatures—indicators that life existed in Mars’ ancient past. Now that the rover is on the Martian surface, Sharma and the team will select rock and soil targets to investigate further and then use green and infrared laser beams to identify the minerals and any organic or biological material found during these observations.

“Congratulations to NASA, and the Mars 2020 Team. Sarah, Shiv, Eleni [Ravanis], Francesca [Cary] and Evan [Kelly] will make Hawaiʻi proud as they contribute to the success of our nation’s latest exploration milestone,” said Rob Wright, HIGP director. “HIGP faculty and their students have been involved in high profile NASA planetary science missions for over 40 years, and our continual involvement, via the competitively awarded funding that they obtain, proves the outstanding quality of the scientists that UH Mānoa has.”