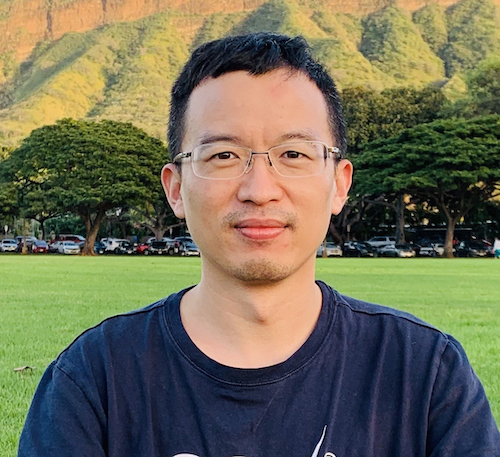 NASA selected SOEST assistant researcher Shuai Li for the Susan Mahan Niebur Early Career Award in recognition of his early career achievements. This award is given annually to a scientist who is no more than ten years from receiving their PhD, has shown excellence in their field and has demonstrated meaningful contributions to the science or exploration communities.

As a faculty member at the Hawai‘i Institute of Geophysics and Planetology (HIGP) in SOEST, Li focuses his research on volatiles (mostly water) on planetary bodies in the inner solar system. His major contribution to the planetary sciences community revealed the distribution, variation and origins of water on the Moon’s surface. Further, he discovered the first direct evidence surface-exposed water ice in the lunar polar regions—a finding that is critical for future space explorers utilization of water resources beyond Earth.

Most recently, Li found that Earth’s oxygen may have been rusting the Moon for billions of years.

When asked what is most interesting to him about this research, Li replied, “It is really amazing to see the strong connections between Earth and the Moon during their evolution in their geological history. For instance, every time we see a full Moon, Earth’s oxygen could be oxidizing iron on the lunar surface. Isotopes of water ice in the lunar polar regions may have recorded the origins and evolution of water on Earth.”

As a member of the NASA Solar System Exploration Research Virtual Institute’s ICE Five-O team, Li also investigates the non-icy components of icy bodies in the outer solar system is providing clues about surface processes and their possible connections to the interior to improve our knowledge about the formation and evolution of the solar system.

Li, appreciating the great working environment of HIGP, SOEST and UH Mānoa, said “Without their support, there is no way to make these achievements.”

Susan Mahan Niebur (1978-2012), who this award honors, was a former Discovery Program Scientist at NASA who initiated the first ever Early Career Fellowship and the annual Early Career Workshop to help new planetary scientists break into the field.