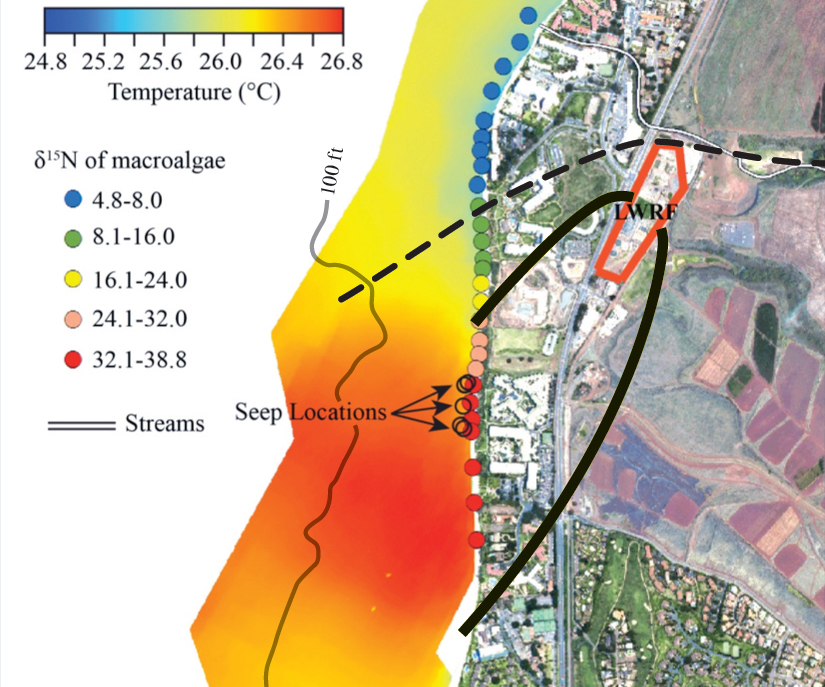 Based on scientific findings from researchers from University of Hawai‘i at Mānoa School of Ocean and Earth Science and Technology (SOEST), a new U.S. Supreme Court ruling has been made that the federal Clean Water Act, which regulates the discharge of pollutants into the nation’s surface waters, including lakes, rivers, streams, wetlands, and coastal areas, must also consider pollutant inputs to those waters by groundwater.

For the past decade, Maui coral reefs have experienced a decline in health and overgrowth by invasive algae. Concerns arose that submarine groundwater discharge was carrying nutrients from wastewater infrastructure to nearby coral reefs, contributing to this decline. However, the quantity and locations of submarine groundwater discharge along Maui’s coasts were poorly known. It was also unclear whether this groundwater carried high concentrations of nutrient or other pollution.

Researchers from the Department of Earth Sciences at SOEST were awarded grants from the U.S. Environmental Protection Agency and U.S. Army Engineer Research and Development Center to investigate the hydrological connections between deep injected effluent from a municipal wastewater treatment plant on Maui and nearby coastal waters. The researchers applied novel techniques including using aircraft to collect thermal infrared imagery to map oceanic inputs and the extent of effluent discharge, deployed scuba seafloor mapping, analyzed groundwater and algae samples to look for isotopic signatures unique to wastewater, used radioisotopes to help establish flow rates, and deployed tracer dyes to track rates and paths of the injected wastewater effluent to Maui’s coastal waters. The tracer dye test provided unequivocal evidence that the injected wastewater travels through groundwater to the coastal ocean.

The research team conclusively demonstrated that millions of gallons per day of deeply injected treated sewage effluent from the west Maui wastewater reclamation facility are being added to Maui’s adjacent ocean waters.

“This was a very impactful scientific study with regard to protecting the environment, and with far-reaching socio-economic and sustainability implications for the State of Hawai‘i and the nation as a whole. Our high-caliber UH team was glad that we could make it happen,” said Craig Glenn, lead author of the study and professor of Earth Sciences at SOEST.

This science effort, also supported by the Hawai‘i Department of Health and the University of Hawai‘i Sea Grant College Program, was essential to a U.S. Supreme Court ruling that clarifies that underground water connections to surface waters are covered by the Clean Water Act. The court ruled that the federal Clean Water Act prohibits unpermitted discharge of pollution into groundwater if it is the functional equivalent of a direct discharge from the point source.