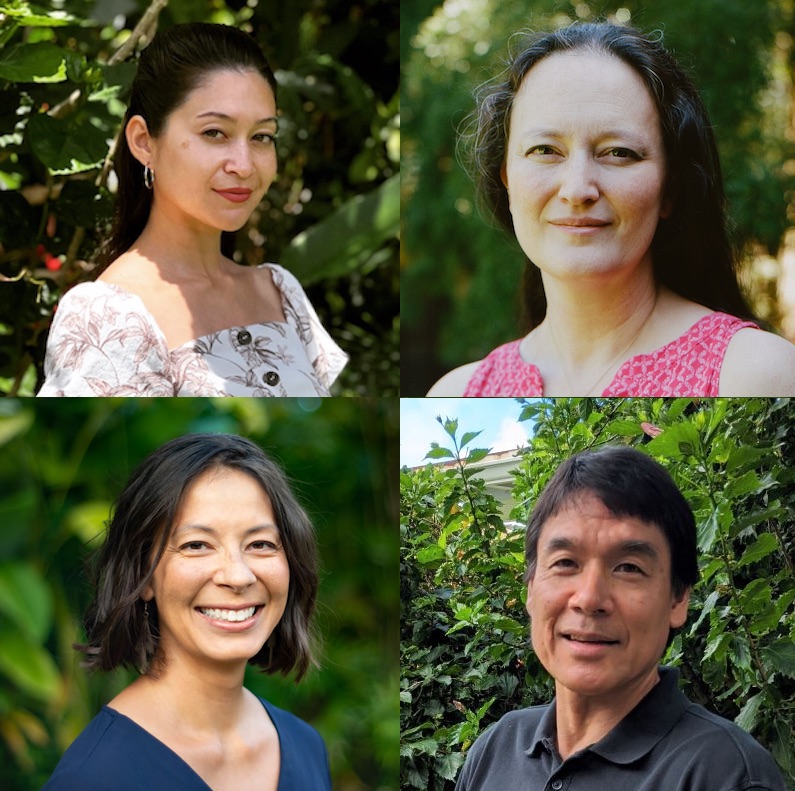 Through many research and academic partnerships with Asia and the Pacific Islands (e.g., IPRC, PacIOOS, PIBHMC), SOEST forms an important cultural and intellectual link between these diverse regions.

SOEST joins the celebration in recognition of the cultural, technological and scientific contributions of Asians and Pacific Islanders in our community and across the country.

What culture/ ethnicity/ ethnicities do you identify with?

ANDERSON: I am the fifth generation of my family to live in Hawaiʻi, and am of mixed ethnicities. My mother’s side is Japanese and immigrated to Kauaʻi to work on the plantations in the late 1800s. My father’s side is of European descent, my grandmother was born and raised in India. She worked for years as a nurse in India and Hawaiʻi.

ISHII: My father is Japanese, and my mother is Caucasian with a lot of English and Swedish, so I identify as “hapa” and grew up with multiple cultural influences. My ethnic background is not obvious from my features, and I’m also an Army brat, so in moving frequently around the mainland as a child, I often was asked to self-identify to new school and neighborhood friends. Back then, it felt a little embarrassing to be “different”, but now I’m proud to claim my blended identity.

ITO: I have mostly identified myself with Caucasian Americans because I was raised in, and attended K-12 and college in predominantly white communities within the U.S.  I spent a fair amount of my life, even into adulthood prior to moving to Hawaii, wanting not to be considered “different” in these communities, and so suppressing attention (by others or even myself) to my 100% Japanese ethnicity.  That said I have always treasured the Japanese American traditions practiced and celebrated by my immediate and extended family.  The cultural diversity in Hawaii has helped me feel more culturally at home, and, in some ways, empowered.

IWAMOTO: I am a half Asian, half white Sansei, or third generation Japanese American. I didn’t identify with my Japanese heritage during my adolescent years because we knew few other Asians in our Midwestern community and because my family’s history with internment during WWII left a lasting imprint and a yearning to prove we were American above all else. It wasn’t until college that I began to explore, learn more about, and embrace my Japanese heritage. Since moving to Hawaiʻi in 2003, I have found the term Hapa to more fully encompass my experience.  I love how Artist Kip Fulbeck describes it: Part Asian, 100% Hapa.

Please share a story of how your ethnicity/cultural background has shaped your experience as a scientist.

ANDERSON: When I was in university studying geophysics I also spent a lot of time in the Hawaiian language community.  This was a way for me to connect with my family’s history in Hawaiʻi, honor those before me, and help care for and carry on that knowledge.  But it seemed like this part of me was not viewed as valuable to being a successful scientist. For years I continued science and Hawaiian separately. Now, I see that this balance formed my foundation as a scientist. Learning through the language of the land provided me with perspectives and skills that enrich my work.  I was hired as a science researcher to use Hawaiian language resources for geoscience projects, and to teach geoscience classes in Hawaiian for immersion schools.  It means a lot that my experiences can support Hawaiʻi’s students.

ISHII: I once had an interesting experience when I was working with a Japanese scientist.  He knew my last name, which is Japanese, and we had corresponded by email in which I used proper honorifics. When we finally met at a research conference, he commented that he only just realized that I was not really Japanese. I was not offended because he was clearly surprised and intended it just as an observation, but it was a reminder of my “in-between” status and a contrast to the assumptions by many Americans, once they hear my last name, that I’m a stereotypical overachieving Asian.

ITO: I cannot think of how my Japanese heritage has shaped my experience as a scientist. I think this is largely because I have not thought that ethnicity should matter in this, or most any profession.

IWAMOTO: I unconsciously internalized the Model Minority Myth from a very young age and carried that into my academic and professional career–keeping my head down, working extremely hard, and often setting unrealistic expectations of myself.  All the while not realizing that this manufactured stereotype not only harmed me, but also had a broader impact of dividing communities of color. I am working hard to unlearn and shed these external expectations in order to be truer to who I am, in all aspects of my life.

What are your thoughts on how increasing diversity impacts the geosciences?

ANDERSON: Throughout my education I had zero women of color STEM professors. And I knew few people in geoscience who had similar mixed backgrounds as me. Increasing diversity in the geosciences can foster environments where more students can thrive under mentors who may be more relatable to them. It can also contribute innovative perspectives and strengthen relationships. This is especially important to communities who are impacted.

ISHII: Diversity is important for creative and innovative thinking in all fields.  Geosciences can particularly benefit because it is starting from behind.

ITO: I am now more aware than I ever have been before about the advantages I have enjoyed in my profession compared to individuals from other groups or ethnicities.  Likewise, I am also more aware of the systemic (conscious and unconscious) negative biases directed toward other groups.  As a community, we must actively promote greater diversity in geosciences.  We need to work at leveling the field by promoting opportunities for individuals associated with less-well represented groups and to stretch ourselves to become better educators and mentors for, and colleagues with, individuals who have attitudes, perspectives, and life-experiences that differ from our own.  This is what is needed to advance the geosciences to its fullest potential, which is so imperative to the well-being of all Earth’s inhabitants.  It also makes the experience in the geoscience profession much more interesting, exciting and fun!

IWAMOTO: Increasing diversity helps create a space in which those that have been historically underrepresented in the geosciences can thrive.  It is challenging and taxing to forge new paths in science when you feel alienated or unsafe.  Increasing diversity also expands the breadth of understanding and enhances innovation. Different experiences, ontologies, and epistemologies result in different perspectives, questions, and methodologies. I believe this enriches the geosciences.

Please share an aspect of APAH month that is particularly meaningful to you.

ANDERSON: I am particularly grateful for our elders, all the previous generations of Asian and Pacific Islander people and their families who have done so much to help others and the world.  They give us knowledge, strength, and wisdom in our lives today.  I hope we can continue to learn from them and give life to their legacies.

ISHII: My Japanese-American grandfather and his brothers, all living in Hawaii then, joined up and served in the US military. My father also served as a career military officer.  It is especially important to me that our nation honor their service and sacrifice. I think it is especially poignant for families like mine that APAH month ends with Memorial Day.

IWAMOTO: APAH month helps open up conversations about the incredible diversity within the nomenclature of Asian American and Pacific Islander. In addition to the cultural and ethnic diversity within these regions, there are also differences in experiences and treatment of different AAPI identities, depending on the communities in which one engages. Recognizing the contributions of Asian Americans and Pacific Islanders in spite of inequities and harmful stereotypes is also important to encourage members that identify as such to continue breaking down barriers.