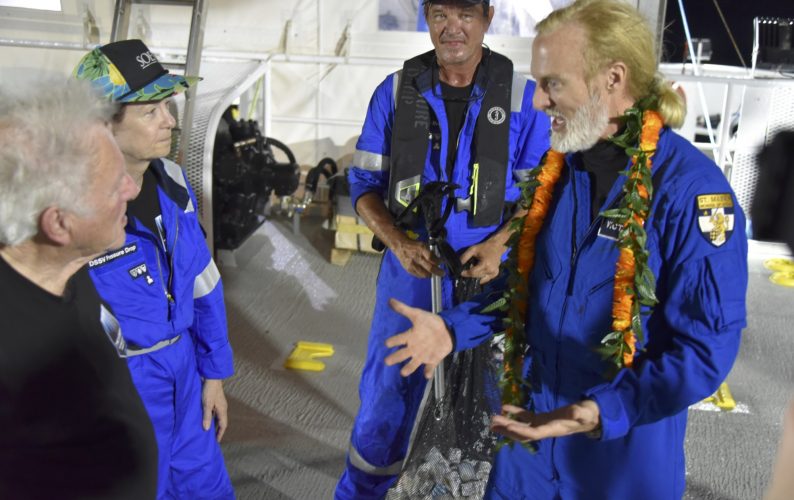 Patricia Fryer, professor in the Hawaii Institute of Geophysics and Planetology, participated as science advisor for the recent Mariana Trench expedition led by extreme explorer Victor Vescovo. During the expedition, which ended on May 9, 2019, the submersible DSV Limiting Factor dove four times in the Challenger Deep area, reaching the greatest depth record, and once in the Sirena Deep, the second deepest part of the Mariana Trench.

Fryer, who is also an alumni of the SOEST Department of Earth Sciences (formerly Department of Geology and Geophysics), was requested on this expedition for her expertise in the Mariana Trench. She was there when first remotely-operated vehicle from the United States dove to the Challenger Deep in 2009. And Fryer was a member of the expedition in 2012 during which James Cameron became the first person to complete a solo dive to the deepest place on Earth to date.

“Being a part of this recent expedition was thrilling!” said Fryer. “This exemplifies the incredible, incremental advances we are making as a scientific community in looking at the world’s deepest ocean.”

The Limiting Factor was designed and built by Triton Submersibles, for Vescovo’s Five Deeps Expedition with the goal of reaching the deepest point in each of Earth’s five oceans. As the only submersible certified to dive to unlimited ocean depth, the Limiting Factor dove in the Puerto Rico Trench in the Atlantic, the South Sandwich Trench in the Southern Ocean, the Java Trench in the Indian Ocean and most recently the Challenger Deep in the Pacific. The Molloy Deep in the Arctic is the last of the remaining dives to complete the Five Deeps Expedition goal.

Vescovo brought back sediment and a couple of rocks from the Sirena Deep that Fryer is examining at UH Mānoa. First, Fryer will image the surface of rocks with a scanning electron microscope to assess the microbial and other seafloor creatures than may exist on the rocks and exposed portions of the mantle in this area. Next, she will make extraordinarily thin slices of the rocks to identify the minerals present and the texture of the rocks. Depending on what she finds there, Fryer may learn more about the mantle’s stress history in this geologically active area.

One thing that is clear, is in terms of how rocks are altered in the deep sea, microbial and geochemical activity are intimately linked. Fryer is interested in understanding the limits and origins of life and what factors influence it. The Limiting Factor submersible will be made available for future dives and will open a new era of hadal marine discovery.

The Five Deeps Expedition is being filmed by Atlantic Productions for a five-part Discovery Channel documentary series due to air in late 2019.

Read more on BBC, The Washington Post and Independent.