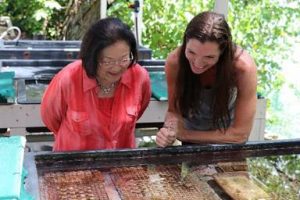 “The unique ocean conditions in Kaneohe Bay make it an ideal location to study how different species of coral might respond to the growing threat of climate change,” Sen. Hirono said. “Through the work of so many scientists and researchers at Coconut Island, Hawai‘i continues to lead a national effort in coral research, and I will continue advocating for essential research programs to receive the federal funding they deserve.”

Sen. Hirono is a longtime advocate for programs supporting coral reef research. Last month, Sen. Hirono joined Rep. Ed Case in reintroducing the Coral Reef Sustainability Through Innovation Act. This legislation directs federal agencies to use existing funding to establish a competitive prize competition focused on coral health. Sen. Hirono has introduced this legislation each Congress beginning in 2016, when she first partnered with former Congressman Mark Takai in the effort.