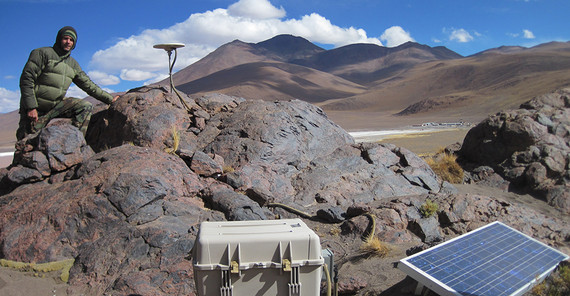 Earth scientists from the University of Hawai‘i at Mānoa recently co-authored a study in Science Advances that investigated the characteristic surface motion that occurs in the weeks to months to years after very large earthquakes. By combining GPS measurements with a new numerical modeling method, the team, led by Jonathan Weiss, postdoctoral researcher and lecturer at the University of Potsdam Institute for Geosciences and alumni of the UH Mānoa School of Ocean and Earth Science and Technology (SOEST), probed the Earth’s structure beneath a portion of the southern Andes.

Weiss, SOEST researcher James Foster and graduate student Jonathan Avery, and international colleagues use a network consisting of hundreds of permanent Global Positioning System (GPS) stations installed across South America—from the Chilean coastline in the west to the rainforests of Brazil in the east—to measure horizontal and vertical ground motions as small as a few millimeters per year. The instruments are similar to but much more precise than those in mobile phones or automobile satellite navigation systems. Studying these motions can reveal detailed information about numerous processes ranging from the forces responsible for mountain building over long timescales, the short-term behavior of rocks in response to large, earthquake-induced changes in stress, and even seasonal cycles of rainfall in the Amazon basin.

The team analyzed continuously recorded GPS data from after the 2010 magnitude 8.8 Maule earthquake in Chile, which was the largest event to occur in that region for 50 years, using a novel geophysical data inversion technique. Their modeling approach used surface motion measurements from GPS data to reveal details of the physical properties of the rock in the crust and mantle, and how it responded to the stresses generated by the earthquake. This innovative and computationally efficient approach contrasts the commonly used forward modeling methods that require immense computational time and resources.

The newly published results of their study confirm that the combination of a dense network of GPS sites with the new inversion algorithm can significantly increase our knowledge of subduction zone and deep crustal and upper mantle structure, which ultimately controls the distribution and frequency of large earthquakes and volcanic activity. Their study provides a new piece of the puzzle that may aid scientists in determining when and where the next destructive earthquake will occur.

Content courtesy of Simon Schneider from University of Potsdam.