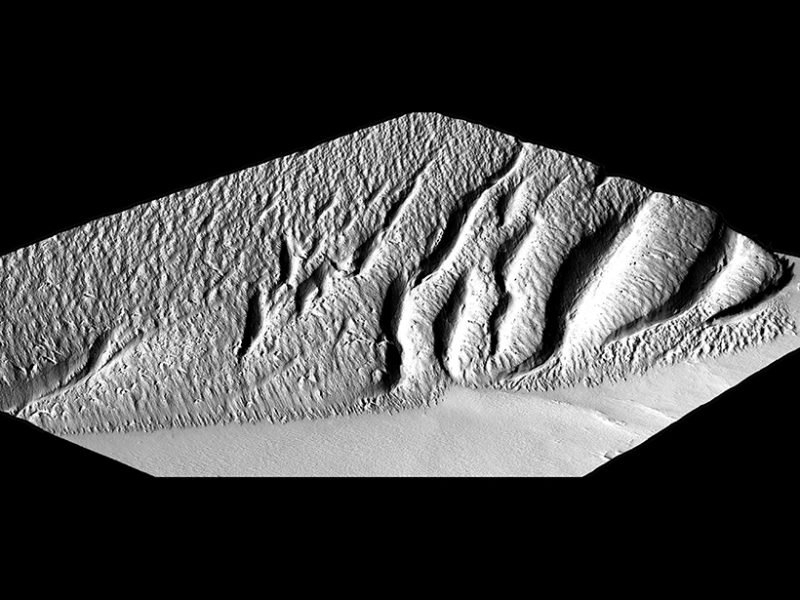 Medusae Fossae is an enigmatic region of Mars whose origin has puzzled researchers for decades. Image generated by Peter Mouginis-Mark (HIGP, UH Mānoa) from a CTX image draped over a digital elevation model created by Harold Garbeil (also at HIGP).

Rafts of pumice-like material, similar to rafts found floating in Earth’s Pacific Ocean, may be responsible for some of the most enigmatic terrain on Mars. A new theory suggests that low-density rocks could have slid down the slopes of the Red Planet’s largest volcano to create giant rocky rafts in the planet’s early ocean. Ultimately, researchers suggest, the material washed up on shore to create the expansive region known as Medusae Fossae.

Geologists have been trying to understand how Medusae Fossae formed since NASA’s Mariner spacecraft first observed the region in the 1960s. A variety of mechanisms have been suggested, but each mechanism comes with its own set of challenges that keep it from fully explaining the deposit.

Now a new idea has surfaced. Pumice rafts can “travel 5–8 kilometers on Earth,” said Peter Mouginis-Mark, a planetary scientist at the Hawai‘i Institute of Geophysics and Planetology (HIGP), and lead author on the new paper published this month in the journal Icarus. “There’s no conceptual reason why they couldn’t do that on Mars.”

Read more about it in EOS.