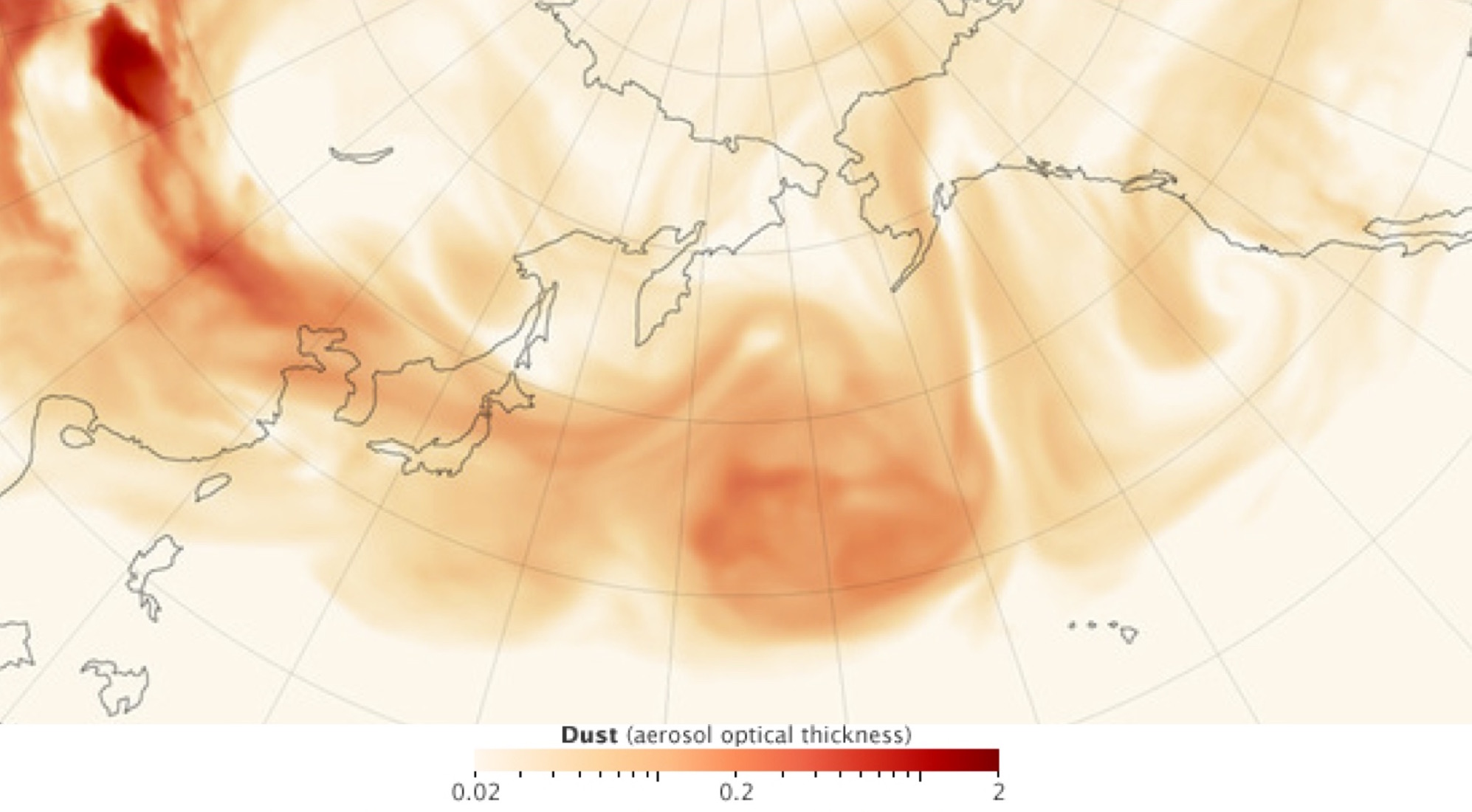 The vast subtropical “gyres” – large systems of rotating currents in the middle of the oceans – cover 40 percent of the Earth’s surface and have long been considered biological deserts with stratified waters that contain very little nutrients to sustain life. These regions also are thought to be remarkably stable, yet scientists have observed the region’s chemistry changes periodically, especially levels of phosphorous and iron, affecting the overall nutrient composition and ultimately its biological productivity.

In a new study published in Proceedings of the National Academy of Sciences, researchers from the University of Hawai‘i (UH) at Mānoa, Oregon State University (OSU) and elsewhere, documented what induces these variations: changes in the amount of iron that is deposited into the ocean via dust from Asia.

The study, led by Ricardo Letelier at OSU and David Karl with the UH Mānoa Center for Microbial Oceanography: Research and Education, used three decades of observation data from the Hawai‘i Ocean Time-series (HOT) program, which is based at UH Mānoa and funded by the National Science Foundation.

“We now know that these areas that were thought to be barren and stable are actually quite dynamic,” said Letelier. “Since these areas cover so much of the Earth’s surface, we need to know more about how they work in order to better predict how the system will respond to climate variations in the future.”

Both phosphorous and iron are key components for life and the researchers noticed that the levels of those nutrients in North Pacific gyre surface waters changed significantly during the three decades of the study.

The team was able to relate these changes to the iron input from Asian dust – a combination of the desertification of that continent, with combustion, especially wildfires and factory output and the wind patterns across the North Pacific Ocean – that accounted for the variance and provided varying amounts of nutrients to sustain life.

And a key to that variance is the Pacific Decadal Oscillation, an ocean-atmosphere relationship that varies between weak and strong phases of atmospheric pressure in the northeast Pacific.  In years when the low pressure weakens, winds from Asia become stronger, move more southward, and bring more dust, fertilizing the ocean surrounding Station ALOHA, the open ocean field station of the HOT program. When the pressure strengthens, the opposite takes place.

Strong winds can bring significant amounts of iron, allowing organisms to grow and utilize all the phosphorus in the upper layers of the ocean. However, because most of the iron is not soluble, deep waters are enriched in phosphorus relative to iron.  Hence, when winds are weaker, there is little iron input to fertilize and remove any excess phosphorus in the upper layers that may be introduced through deep water mixing.

As the Artic warms, the scientists say they expect to see long-term changes in wind patterns across the North Pacific. In addition, the evolution of land use and pollution driven by anthropogenic activity in Asia will affect the sources and magnitude of iron and other nutrients carried by wind across the ocean.

How these changes will affect the transport of iron-rich dust into the eastern Pacific and affect the productivity in this vast oceanic region remains an open question.

In addition to Karl, UH Mānoa researchers Karin Bjorkman, Niklas Schneider and Angelicque White are co-authors on this study.