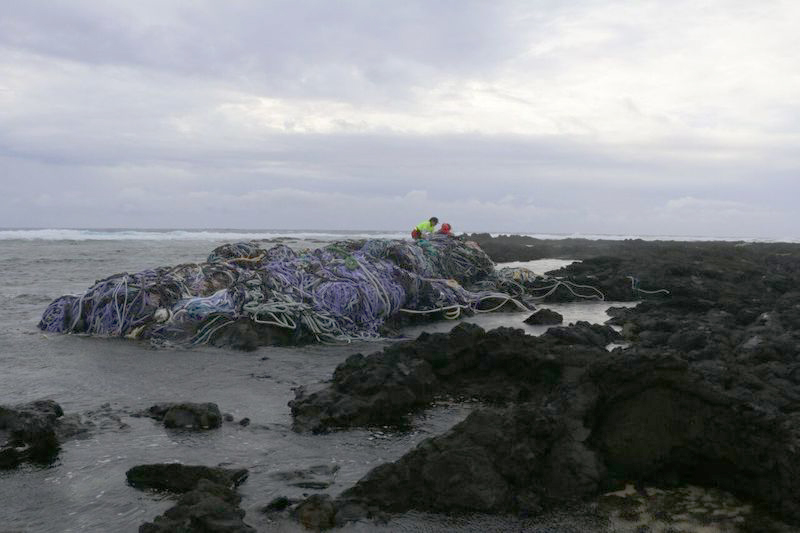 University of Hawai‘i researchers and Hawai‘i Wildlife Fund volunteers investigate a 40-ton net mass that washed ashore in January at Kamilo Point in Ka‘u on the island of Hawai‘i. Courtesy of the Department of Land and Natural Resources (DLNR).

Kamilo Point Beach in Ka‘u on Hawai‘i Island — often nicknamed “Plastic Beach” because of the concerning amount of refuse on its shores — has a bit of a rope problem too.

Recently, UH researcher Sarah-Jeanne Royer took a picture standing atop a gigantic pile of discarded fishing rope embedded in Kamilo Point’s lava rock coastline, bringing attention to the troubling environmental hazard. Royer is part of Nikolai Maximenko‘s group at the International Pacific Research Center (IPRC), a group that recently started a project where they attach GPS trackers to marine debris to better determine the pathways of garbage once it hits the ocean.

Asked to explain why Hawai‘i is experiencing an unusual influx of large tangles of debris this winter, Royer explained, “It is because of weather conditions and ocean currents. Some of this debris was probably caught up in the North Pacific Gyre, euphemistically called the ‘North Pacific Garbage Patch’, for months, if not years. The gyre is spitting out this stuff and it’s ending up on our shores.”

Read more about it and watch the video report at Hawaii News Now, Hawaii Tribune Herald, and Big Island Now.