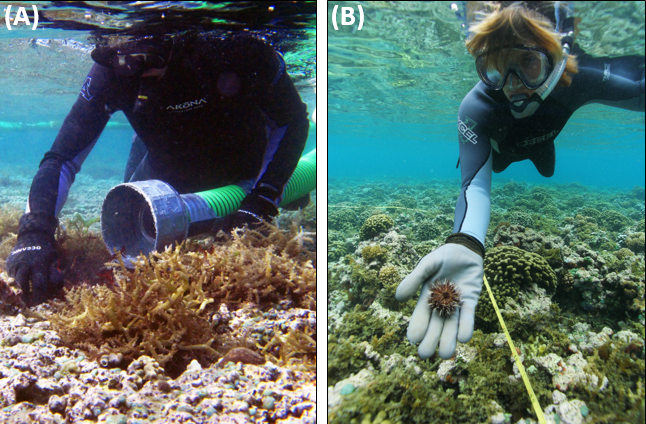 Researchers at the Hawai‘i Institute of Marine Biology (HIMB) and the State of Hawai‘i Division of Aquatic Resources (DAR) found a management approach combining manual removal and outplanting native urchin was effective at reducing invasive, reef smothering macroalgae by 85% on a coral reef off O‘ahu, Hawai‘i.

Globally, the health of coral reefs is threatened due to rising ocean temperatures and ocean acidification. However, local factors such as invasive macroalgae also pose a serious risk to coral reefs—monopolizing reef habitats, and overgrowing and smothering native species, such as corals.

Chris Wall, doctoral candidate at HIMB and Brian J. Neilson, Acting Administrator at DAR and others tested a novel approach to curbing the abundance of invasive macroalgae on the coral reefs of Kāne‘ohe Bay, O‘ahu. First, divers manually removed invasive macroalgae with the assistance of an underwater vacuum system, “The Super Sucker.” Then, hatchery-raised juvenile sea urchins (the Hawaiian native collector urchin, Tripneustes gratilla) were outplanted to graze on invasive algae to control regrowth.

In total, the team removed over 40,000 pounds of invasive macroalgae, outplanted 99,000 sea urchins, and treated nearly six acres of reef area over two years. During this period, invasive macroalgae declined in response to treatments, and importantly, there were no observed negative effects to important reef calcifiers such as corals and crustose coralline algae.

“This management approach is the first of its kind at the reef-scale,” said Wall. “Our research shows promise as an effective mean to reduce invasive macroalgae with minimal environmental impact, while also incorporating a native herbivore to regulate a noxious invasive species.”

“Coral reefs are an important part of the economy, culture, sustenance and recreation of Hawai‘i,” said Neilson. “Local action is instrumental in supporting the resilience of coral reefs. This study provides an important tool that can assist in the management and conservation of coral reefs.”

“The surprise was just how effective this approach was at reducing invasive macroalgae over the two-year period,” said Wall. “We were able to successfully leverage the rigorous, detailed science of prior studies to assist in scaling the management plan from an aquarium to an entire reef. One of the lessons here is that a well-designed management plan can reap significant benefits and lead to the most effective path forward, both logistically and financially.”

DAR is continuing to monitor the reefs of Kāne‘ohe Bay and the long-term effects of macroalgae removal and urchin herbivory on coral reefs.  In addition, DAR and UH scientists are actively studying the influence of local weather and global climate phenomena, such as the 2014-2016 El Niño and global bleaching episodes, as drivers of changing coral and invasive macroalgae abundance through time.