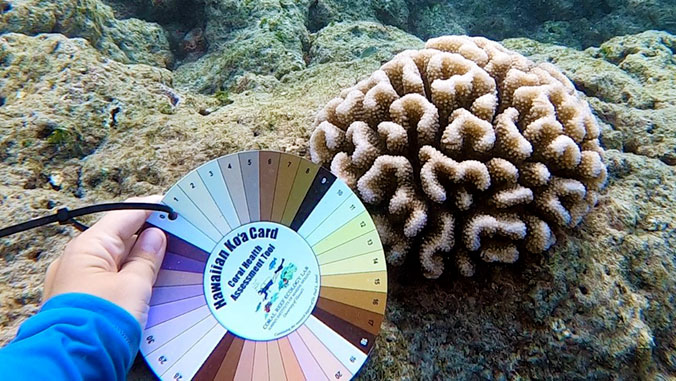 Oceans are changing at an alarming rate, which has severe consequences on many valuable ecosystems, especially coral reefs. Researchers developed a new tool called the Hawaiian Koʻa (coral) Card to help monitor coral health and coral bleaching in Hawaiʻi. The card is free to the public and available for pick-up at the Division of Aquatic Resources Offices on Oʻahu, Maui, Kauaʻi, Hawaiʻi Island and other select sites, allowing ocean users to develop a sense of kuleana (responsibility) and mālama (stewardship) for Hawaiʻi’s reefs.

Kuʻulei Rodgers, a researcher at the Hawaiʻi Institute of Marine Biology (HIMB) and senior author of the paper, and Keisha Bahr, an assistant professor at Texas A&M University-Corpus Christi and lead author of the paper, set out to develop an inexpensive, rapid and non-invasive coral health tool that could be used by the public to assess and report on coral health and bleaching severity. The research was published in Springer Nature Applied Sciences.

Coral bleaching is a process wherein corals lose their symbiotic algae, zooxanthellae, which provide a significant food source and color to their coral host. The white coral skeleton is then visible through the transparent tissues giving a “bleached” appearance. Mortality will occur if the coral and symbiont relationship is not re-established quickly.

An easy and effective field method of determining the severity of bleaching is comparing different shades of color over time, between sites, and coral colonies. With the increasing occurrence of coral bleaching events, there was a pressing need to standardize observations across resource managers, community members and scientists when capturing the changes occurring on reefs.

“With our waters getting warmer, we don’t have the capacity to monitor every reef for bleaching and mortality. We needed more eyes in the water, and we needed to equip them with a tool to quantify their changes,” said Sarah Severino, a research assistant at HIMB.

The Hawaiian Koʻa Card is a waterproof color wheel, divided into four sections that represent the main color groups of corals found in Hawaiʻi. Each section of the card has colors that have dark to light shades, which represent the stages of coral bleaching.

“To use this tool you basically go up to the coral in the water, hold the card up, and you want to try to find the color that best represents the whole coral colony,” said Anita Tsang, a graduate assistant at HIMB’s Coral Reef Ecology Lab.

Each color on the Hawaiian Koʻa Card is represented by a number. When assessing a coral colony participants can report their coral health observations online through the Pacific Islands Ocean Observing System and view coral health conditions across the State of Hawaiʻi.

“A similar coral health color chart was developed in the 2000s for corals in the Indo-Pacific and has been very successful, but those corals are not well representative of the corals’ colors in Hawaiʻi,” said Bahr.

Since the development of the Hawaiian Koʻa Card, Bahr, Rodgers and their team have conducted several outreach and training events to reach resource managers, educators, students, community groups and individuals.

“It will allow us to identify where coral bleaching is happening and also identify areas of resilience, where we can focus our efforts,” said Tsang. “And that way managers can actually take action and directly address these issues.”

“In the past, resource users’ observations were the most effective way to determine coral reef conditions,” added Rodgers. “The Hawaiian Koʻa Card restores this skill and trains ocean users to detect these differences, giving individuals and communities a sense of kuleana and mālama for their reefs.”

Find more information about the Hawaiian Koʻa Card and where to get one online or visit HIMB’s Coral Reef Ecology Lab.