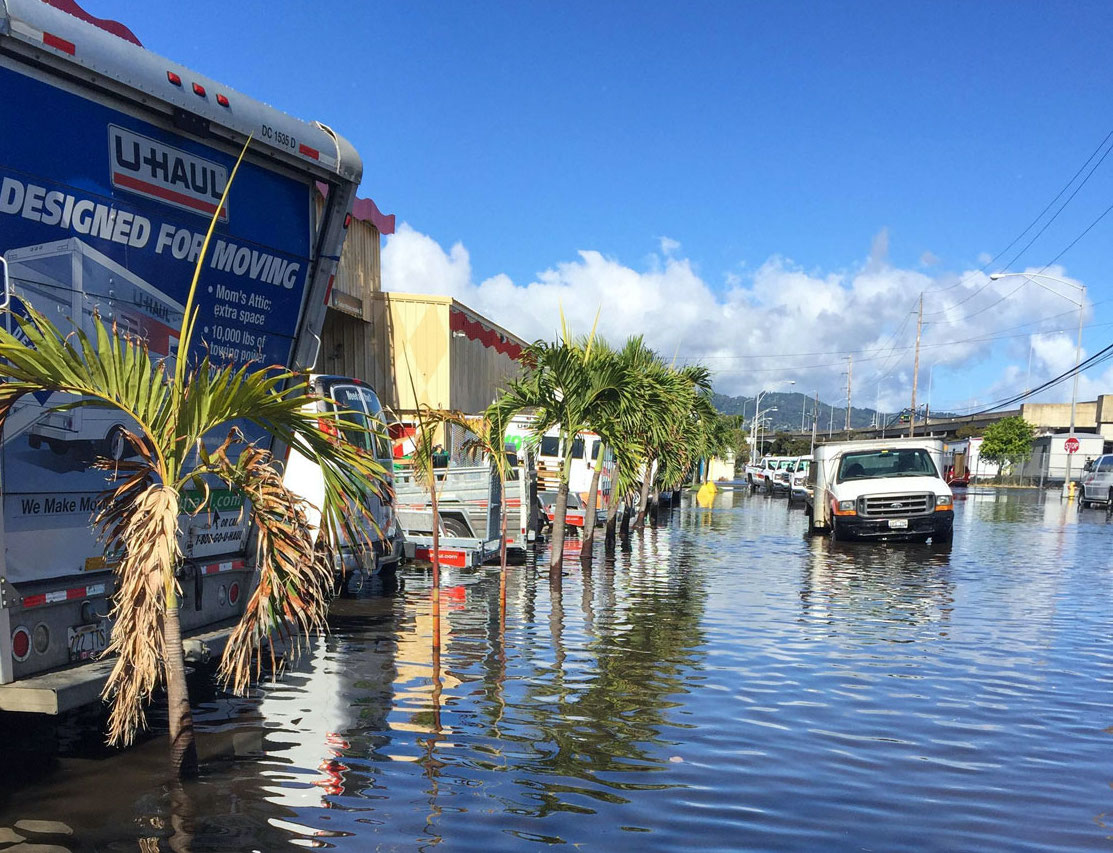 In the mid-2030s, multiple United States coastal regions may see rapid increases in the number of high-tide flooding (HTF) days, according to a study led by SOEST researchers and published today in Nature Climate Change. The combined effects of sea-level rise (SLR) and natural fluctuations in tidal range are anticipated to cause tipping points in the frequency of HTF.

Coastal locations around the U.S., particularly along the Atlantic coast, are experiencing recurrent flooding at high tide. The impact of HTF accumulates over numerous seemingly minor occurrences, which can exceed the impact of rare extremes over time. These impacts are subtle—for example, the loss of revenue due to recurrent road and business closures—compared with the physical damage of property and infrastructure associated with extreme storm-driven events.

“We expect the most rapid increases to be along U.S. Pacific and Gulf of Mexico coastlines, which includes Hawaiʻi and other Pacific Islands. This is important, because this is the point at which high-tide flooding transitions from being primarily a local or regional issue and becomes a national issue affecting a majority of our nation’s coastlines,” said lead author Phil Thompson, director of the University of Hawaiʻi Sea Level Center and assistant professor of oceanography in SOEST.

Thompson and researchers from around the country analyzed tide gauge data from 89 coastal locations around the U.S., including 10 locations from Hawai‘i and U.S.-Affiliated Pacific Islands, and developed a novel statistical technique that combined changes in tidal range with NOAA sea level rise scenarios for the 21st century to produce the projections of high-tide flooding.

Continued sea-level rise will exacerbate the issue where present, and many more locations will begin to experience recurrent high-tide flooding in the coming decades. Additionally, the research team found that annual cycles in tides and sea level can combine with oceanographic anomalies to produce many high-tide flooding episodes over a short amount of time—creating extreme months with clustered events.

The results of the study directly address how coastal communities could plan for future.

“Scientists, engineers and decision-makers are accustomed to thinking about rare high-impact events, for example, a 100-year storm, but we demonstrate that it is important to plan for extreme months or seasons during which the number of flooding episodes, rather than the magnitude, is exceptional,” said Thompson.

Further, the scientists found that naturally occurring fluctuations in tidal range from one decade to the next alternately reduce and exacerbate the impacts of sea level rise.

“Understanding and communicating this phenomenon reduces the possibility of complacency and inaction during periods of reduced impacts and helps us be more prepared for periods when impacts will be heightened,” Thompson added. “As an island state with much of its infrastructure and economy vulnerable to sea level rise, these results are crucial to understanding how impacts from sea level rise will evolve in coming decades in Hawai‘i.”

Research such as this provides sound, science-based information on which decision makers can base plans for adapting to sea level rise and mitigating the impacts of local and regional flooding.